In-person classes boosts enrollment for some Catholic schools, but that won’t save them all. 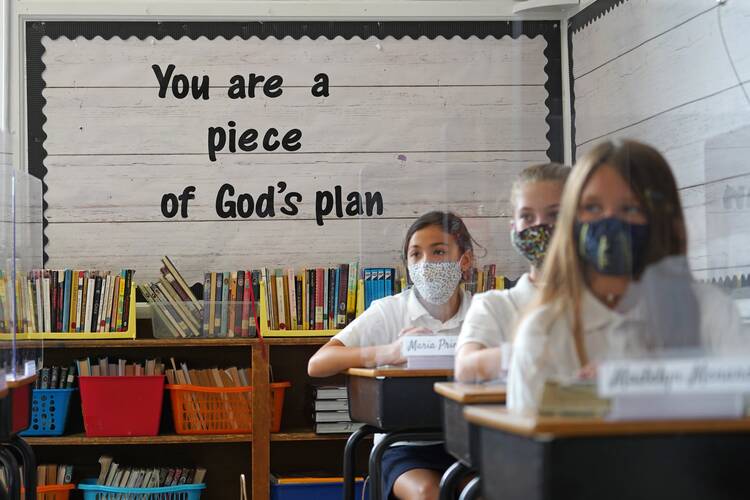 Sixth-graders sit at their desks on the first day of classes of the new academic year at Our Lady of Victory School in Floral Park, N.Y., on Sept. 8. (CNS photo/Gregory A. Shemitz)

With the Covid-19 pandemic forcing millions of students in public schools into online learning, some Catholic schools that have resumed in-person teaching report bumps in enrollment. But this temporary advantage may not be the lifeline that Catholic elementary and secondary schools need to reverse years of declining student populations and closures across the country.

At St. Paul of the Cross School, in suburban Chicago, just over 600 preschool-through-eighth-grade students have begun the new school year in person. The public schools in the cities and towns that the school draws from are still in online mode, a situation Principal Erika Mickelburgh said prompted about 30 families to switch to St. Paul. Many of the families told Ms. Mickelburgh they had already been considering Catholic schools before the availability of in-person teaching helped them make the decision.

“We had to completely re-envision the way the school day looks,” Ms. Mickelburgh told America. Communication was key, she said, pointing to a 35-page reopening plan posted on the school’s website this summer. “Our parents have been so supportive, so understanding, with an attitude of ‘We want our kids back to school,’” she said.

What happened at St. Paul of the Cross seems to be taking place around the United States, at least to some degree. In Detroit, several Catholic schools report longer waiting lists than normal. Some Catholic schools in New Jersey anticipated losing students over the summer, as has become common, but instead reported increases in enrollment. Catholic schools in Virginia reported an increase of about 8 percent across the school system, with parents seeking spots after public schools announced virtual learning policies.

But these increases in enrollment may reflect only a temporary reprieve to struggling Catholic schools, as the pandemic may hasten the demise of other schools, ones that were struggling before the coronavirus and have not seen any improvement this year.

Catholic school closures are actually up this year, with about 150 shutting their doors for good in recent months, according to the National Catholic Education Association. That is an increase of about 50 percent compared with this time last year.

“That bump is being seen in suburban Catholic schools, not so much in urban or rural schools.”

Kathy P. Mears, the interim head of the N.C.E.A., said that while enrollment data is still being gathered, she has heard stories similar to St. Paul’s playing out across the United States. But she cautions that the phenomenon of waiting lists at certain Catholic schools does not tell the whole story.

“That bump is being seen in suburban Catholic schools, not so much in urban or rural schools,” Ms. Mears said. She also cautioned against reading too much about a school’s financial health by looking at waiting lists. Because of the pandemic, some schools have reduced class sizes to help achieve social distancing. That means they may not be filled to normal capacity but still have to turn away students—along with their tuition payments.

Ms. Mears said schools that are financially stable may be able to weather the uncertainties associated with the pandemic, but others may not survive the slowdown in the economy. If parents lose their jobs and cannot pay tuition, overall enrollment will continue to decline. Schools that are barely scraping by today could be in even deeper trouble tomorrow.

Still, the bump this fall has been a shot in the arm for some Catholic schools.

“People are hopeful, and it’s great to have a waiting list. It’s great to feel that people want to come to your school,” Ms. Mears said. “But it’s very uneven where it’s happening.”

If parents lose their jobs and cannot pay tuition, schools that are barely scraping by today could be in even deeper trouble tomorrow.

One place where it is happening is the Archdiocese of Boston. Last year, schools there saw one of the worst on record in terms of enrollment. About 5,700 students, or more than 15 percent of the total student enrollment, left the system’s 110 schools.

Thomas W. Carroll, the superintendent of Boston’s Catholic school system, said that beginning in July, news reports suggested that most public schools in Massachusetts would begin the year with remote learning. When Catholic schools announced in-person teaching, he said, Boston parents scrambled to enroll their children in those schools.

What they had to do to reopen safely was require masks for most students, disinfect the buildings regularly and enforce social distancing. Parents have the option for virtual learning if they are still uncomfortable sending their children to school. And if a local health department deems conditions too unsafe for in-person learning, perhaps because of an uptick in coronavirus cases, the schools will go remote until it is safe to return to the classrooms.

Some public school teacher unions, such as in New York and Houston, have called for remote learning because they say administrators have not taken adequate steps to ensure the safety of students and staff. But teachers in many Catholic school systems, including Boston, do not belong to unions, and Mr. Carroll acknowledged that not everyone was on board with the return to in-person instruction.

The turnover rate of teachers at Boston’s Catholic schools, which the superintendent said is a perennial challenge given the better salaries of teachers at public schools, is higher this year than in previous years. “Some people have decided they didn’t want to be in the classroom this year,” he said. “We’re in the process of replacing teachers who made that decision.”

Still, the archdiocese has seized on the interest parents showed for in-person instruction, launching a website aimed at helping parents find schools with open spots and ensuring that proper safety protocols are in place for the start of the academic year.

The surge in enrollment was not enough to make up for the roughly 5,700-student drop-off from last year, but it was close.

I am a Catholic school parent. Please save our urban schools.
Lance Lee

Why our Jesuit High School is returning to in-person learning this fall
Christopher J. Devron, S.J.

Nearly 4,000 students enrolled in Boston’s Catholic schools this summer. Some of those students are enrolling in different schools after their previous Catholic schools shut down for good in the spring. But Mr. Carroll said the majority are students who have not been part of the Catholic school system. He believes that parents and students will be impressed by their experience in the archdiocese’s schools, which he hopes will keep enrollment steady whenever public schools return to in-person learning.

Over the coming weeks, both Mr. Carroll in Boston and Ms. Mickelburgh in Chicago said, flexibility will be key. Parents are being asked to monitor their children’s health and to keep them home if they show signs of illness. Protocols are in place to track Covid-19 cases.

“That’s what it’s going to take to keep us all in school and safe and healthy,” Ms. Mickelburgh said. “I don’t know who is more excited to be back, the parents or the kids.”