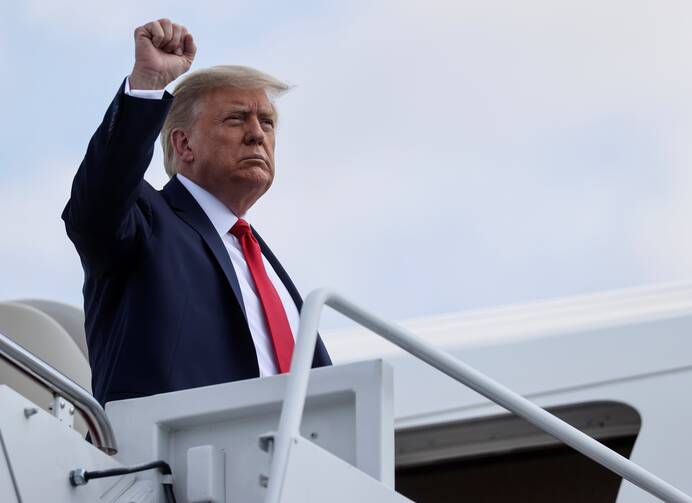 President Donald Trump boards Air Force One at Joint Base Andrews in Maryland, Sept. 8, 2020, as he departs for campaign travel to Florida and North Carolina. (CNS photo/Jonathan Ernst, Reuters)

A small pleasure of life under the pandemic has been a late-afternoon walk around the block with my kids. Sometimes it happens when I am in the middle of a beer, and I bring it with me, which is illegal. I did just this the other day, and when we rounded the corner a neighbor skateboarded by, a young Black man. I am white. I shuddered, with the scenes flashing in my mind of police killings this summer, and the unequal consequences of minor infractions. The beer in my hand transmuted from an instrument of relaxation to a vicious boast—that for me the law is a more negligible threat.

In this sense, at least, a neighborhood stroll echoed the message proclaimed at this year’s Republican National Convention, as President Trump led his cabinet and staff in flagrant, orchestrated defiance of the Hatch Act, which bans federal employees from using federal property for political activities. “We’re here and they’re not,” the president boasted from the White House lawn, referring to his political opponents.

Officially, the administration defended the legality of politicizing the White House and performing formal naturalization ceremonies during the convention. But these acts follow a pattern of sanctioned law-bending—and are of a piece with the president’s willingness to issue pardons and offer clemency for racist policing,political allies,war criminals and border agents illegally turning away asylum applicants. After campaigning on the promise to prosecute Hillary Clinton for using a private email server while holding public office, Mr. Trump has stood by as members of his family and staff have repeatedly done just that. The president’s closest associates keep doing things that merit criminal convictions.

“Law and order” is a promise for some at the expense of others.

This is the president of “LAW & ORDER” tweets. What sense does that make?

There is a crooked solidarity when people do wrong together. It is a tie that binds gangs, mafias, corporate raiders and paramilitaries. On college campuses that espouse liberal values, as I have argued before, the toleration of underage drinking serves as training for white-collar crime. In the case of this administration, law-breaking is a campaign pitch. It is a naked declaration that the outcome of this election will determine who has the power to bend the law their way—who can break it and who cannot. The convention’s Hatch Act performance binds members of the administration to the uphill battle of winning the election: Win or else they lose their protection. “Law and order” is a promise for some at the expense of others.

Selective enforcement is not an offer unique to the Trump administration. Democrats are running on that promise, too, if less flagrantly so. This is a basic question we can ask of any aspirant to power: What kinds of law-breaking will you tolerate?

This election poses a number of such choices. Joe Biden expresses a willingness to accommodate undocumented migrants entering the country, particularly refugees; Mr. Trump has stretched both the law and the moral imagination in his administration’s crackdown on such migrants. While condemning acts of violence, Mr. Biden expresses sympathy for rowdy, sometimes destructive protests for racial justice; Mr. Trump signals support for a teenager illegally carrying an AR-15 into one of those protests and firing it. Democrats have tended to support civil disobedience against fossil-fuel pipelines like the Keystone XL; Mr. Trump celebrates the Keystone XL’s progress, although the Rosebud Sioux Tribe views it as an illegal treaty violation.

The predictable irony is that the “law and order” president is the one who makes political theater out of showing that the law does not apply to him and his allies.

Mr. Trump has welcomed intervention from foreign governments in his campaigns, without consequence from his party; Democrats increasingly call for laws that give citizens convicted of felonies the right to vote. Mr. Biden and other leading Democrats claim to hold international law dear, despite their enabling role in such atrocities as the war in Iraq and assassinations by drone; Mr. Trump dismisses international law altogether, having recently imposed financial sanctions and travel restrictions on members of the International Criminal Court.

What is the law, anyway? Ever since St. Paul left us with paradoxes about what Christians owe to the law of Moses—and surely before that, too—people have recognized that truth lies somewhere in tension with the law, not merely within or outside of it. As the philosopher Giorgio Agamben has long argued, the meaning of sovereignty is the power to suspend the law, to decide who is vulnerable and who can expect protection. This kind of sovereignty, in an era of the imperial presidency, is what now hangs in the balance.

Who will be vulnerable, then, and who can expect protection? As a general pattern, Mr. Trump opts for those already with power when given the choice—the citizen over the refugee, the well-armed militias over the protesters, the oil companies over the tribes, the dictators over the disenfranchised, powerful nations over the international community. The most glaring exception may be Mr. Trump’s willingness to use his powers for the cause of the unborn, although we may disagree over the calculus of vulnerability. Overall, the laws he flaunts are chiefly those that rein in the powerful, not those that oppress the poor. Mr. Biden appears to harbor an opposite bias—but is less eager to flaunt it.

Civil disobedience is for citizens, not presidents.

I should be careful not to overstate an equivalence between Mr. Trump and Mr. Biden on their tolerance for law-breaking. The predictable irony is that the “law and order” president (along with Richard Nixon, who previously trumpeted the phrase) is the one who makes political theater out of showing that the law does not apply to him and his allies.

So we can decide which style of law-breaking we prefer. But what is truly troubling about where we find ourselves is the extent to which we have invested in the presidency the status of sovereign, which should belong (if anywhere under God) to the people. Civil disobedience is for citizens, not presidents. To the extent that this election has become a contest between possible sovereigns, we have given up on a functioning democracy. The presidency itself has become a signal of American decline.

The law against taking a stroll with a can of beer is a dumb law, regardless of how it is enforced. So are the laws that prevent reasonable police accountability, humane immigration policy, climate action, gun control or equitable taxation. There are a lot of dumb laws out there, and because legislative gridlock leaves little hope that they will change, people hope for a sovereign’s protection from the mess we have found ourselves in. We have too few freedoms and too little progress.

In November, Americans will be voting for a president—hopefully not a savior. May this calamitous period remind us that real democracy should not depend on a renegade presidency.