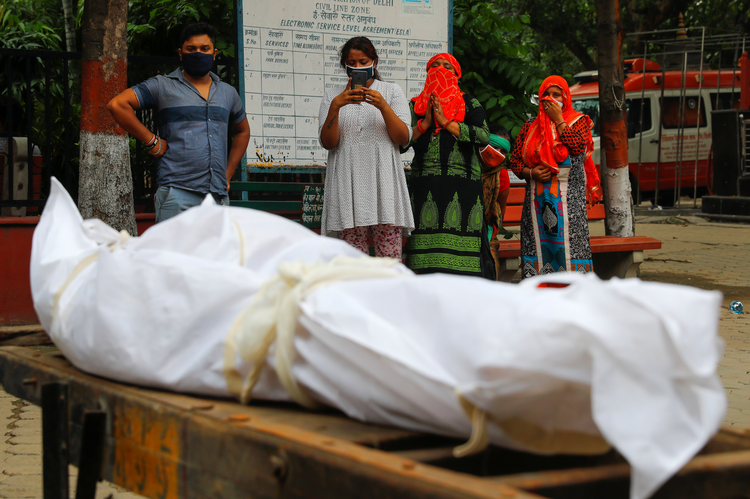 At a crematorium in New Delhi Sept. 7, 2020, relatives mourn a man who died of COVID-19. In India, traditionally Christians only bury the dead bodies, while cremation is seen as a Hindu tradition. The pandemic has changed that. (CNS photo/Adnan Abidi, Reuters)

THRISSUR, India (CNS) -- The Synod of the Bishops of the Syro-Malabar Catholic Church has recommended setting up crematoriums in dioceses amid the worsening Covid-19 pandemic.

"Though burying the dead bodies is the practice in the church, the (Eastern-rite) canon law permits cremation in times of pandemic," said a statement from Cardinal George Alencherry, major archbishop of the church.

The synod said cremains should be buried in cemeteries, said the statement, read in churches Sept. 6.

The Covid-19 situation in India has been worsening; India, with more than 4.3 million cases, is now second after the United States.

"Burying the Covid bodies poses a serious challenge to the church in Kerala due to our high density of population and crammed cemeteries," Syro-Malabar Bishop Pauly Kannookadan of Irinjalakuda told Catholic News Service Sept. 9.

Kerala state, a 360-mile strip of land on the Arabian Sea coast, has a population density three times the national average. The state has nearly 35 million people, 18 percent of whom are Christian.

The church cemeteries are short of burial space for Covid-19 protocols, which call for deep graves.

"I proposed (in July) cremation before burying the ashes in the church cemetery with the funeral prayers. I had to face a lot of brickbat for that," Bishop Kannookadan said.

Police registered a criminal case and even arrested a Catholic for making a derogatory video against the bishop and sharing it on social media for his proposal of adopting the Hindu tradition of cremating the dead.

Bishop Kannookadan said he was "relieved" that the synod, held in late August, took up his concern.

When one 45-year-old dialysis patient died of Covid-19 Sept. 6, his body was taken to the government crematorium with the consent of the family.

"The ash (kept in the urn and placed in the coffin) was buried in our church," Father Joy Kadambatt of Little Flower Parish told CNS.

Archbishop Kuriakose Bharanikulangara, who heads the Syro-Malabar diocese based in New Delhi, told the CNS that cremation of Christians who died of Covid-19 and conducting the final part of the funeral service with the "urn" in the church is becoming the norm in big cities.

However, the archbishop, a former member of Vatican diplomatic corps, questioned the proposal for setting up crematoriums in the dioceses in Kerala.

"There are several public crematoriums in Kerala. The (electric) crematorium is very expensive ... Do we really need Christian crematoriums?" he asked.