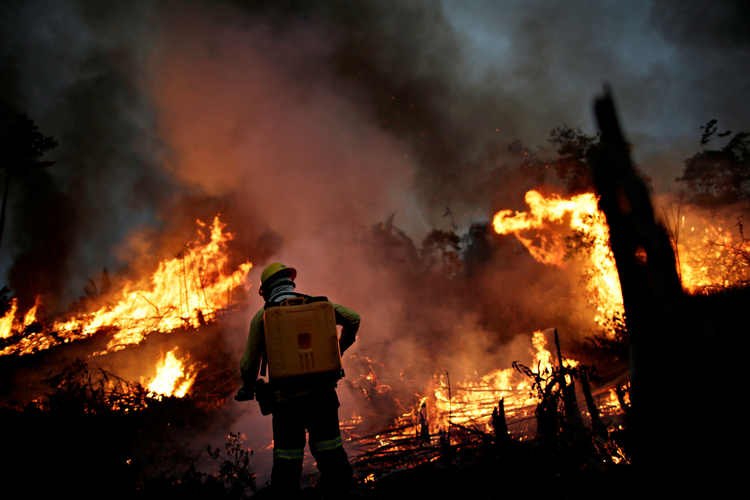 A member of the Brazilian Institute for the Environment and Renewable Natural Resources fire brigade attempts to control a fire in a tract of the Amazon jungle in Apui, Brazil, on Aug. 11. (CNS photo/Ueslei Marcelino, Reuters)

Exactly one year ago, Brazil experienced deforestation and fire indexes in the Amazonian forest that reached then record highs. Escalating during the first year of President Jair Bolsonaro’s government, this environmental crisis cast Brazil as a major global eco-villain.

This year conditions are even worse. Deforestation alerts issued by a satellite-based monitoring system report that losses this year may be about 35 percent higher. From Aug. 1, 2019 to July 31, 2020, more than 9,205 square kilometers, about 3.554 square miles, of Brazilian Amazon forest are threatened.

But those ecological offenses have been overshadowed by an arguably graver crisis, according to members of the local church, the government’s disastrous response to the Covid-19 pandemic. “The government has shown that it has little or no interest in providing adequate health care,” Cardinal Cláudio Hummes, the president of the Pan-Amazonian Ecclesial Network (known as Repam), told America by email.

In an allusion to the fires last year that burned the largest tropical forest in the world, Pope Francis said that the Amazon really needed the “fire that comes from the love of God.”

But at least a few global leaders have been able to keep their eyes on two Amazonian crises at the same time. Asked if Pope Francis were aware of the increasing degradation of the Amazon, Cardinal Hummes replied: “Absolutely.”

The Synod of Bishops on the Amazon in 2019 defined the current economic model applied to the region as unjust and unsustainable. In an allusion to the fires last year that burned the largest tropical forest in the world, Pope Francis said that the Amazon really needed the “fire that comes from the love of God.”

According to Cardinal Hummes, the nation’s reputation for ecological stewardship has been severely undermined by the Bolsonaro administration. “The world no longer trusts the justifications of the Brazilian government,” he said.

Mr. Bolsonaro and his environment minister, Ricardo Salles, have declared that they plan to relax Brazil’s environmental laws and prefer looser interpretations of restrictions in Amazonian territorial preserves. At a presidential cabinet meeting in April, Mr. Salles made headlines when he said that it was necessary to take advantage of media distraction with Covid-19 to “run the cattle herd” over environmental laws. Rules must be “changed and simplified,” he said.

Mr. Salles later argued that he had been misinterpreted and that the media distorts information about the Amazon. "What I said is that this moment allows us to have a little more time to remove excessive bureaucracy," he told CNN Brasil.

Brazil’s once-effective investigation and prosecution of rainforest destruction by ranchers, farmers and miners has come to a virtual halt, “even as this year’s burning season picks up.”

But according to a recent investigation by The Associated Press, Brazil’s once-effective investigation and prosecution of rainforest destruction by ranchers, farmers and miners has come to a virtual halt, “even as this year’s burning season picks up.”

In May, Brazil bishops’ conference (C.N.B.B.) launched the “Amazoniza-te” campaign—a neologism that translates as “Amazonize yourself.” They seek to raise awareness among the general Brazilian population about the plight of the people in the Amazon region. “Mining and deforestation for soybean monoculture and cattle for exportation have been increasing alarmingly in recent years,” says the campaign’s introductory letter.

The bishops denounced a “notorious easing of inspections” as a consequence of “the federal government’s continuing political discourse against environmental protection and indigenous areas protected by the Federal Constitution.”

According to Cardinal Hummes, the church should accompany Amazonian peoples “in their historical journey, especially Indigenous peoples,” he said. Among the proposals that emerged from the Amazon synod in 2019, he highlighted the need to promote “self-determination of the original peoples so that they may be protagonists in their history, and not the object of projects by those who only seek to extract wealth from their soil, their forests and their biodiversity.”

As the Covid-19 crisis has progressed, deaths among Indigenous people in Brazil’s Amazon region are nearly 250 percent higher than in the rest of the population. Especially vulnerable to disease imported from outside the region, Indigenous people have endured escalating territorial incursions from farmers and miners who believe they have the support of public authorities, especially Mr. Bolsonaro, to invade and exploit Indigenous reserves. Some isolated Indigenous communities are at risk of being wiped out.

As the Covid-19 crisis has progressed, deaths among Indigenous people in Brazil’s Amazon region are nearly 250 percent higher than in the rest of the population.

Beginning in 2019 real-time monitoring satellites have tracked a surge in deforestation in the Amazon. Scientists, environmentalists and most of Brazilian media have blamed it on the tacit acceptance by the national government. Mr. Bolsonaro has disputed his own government researchers’ findings on deforestation and fired the head of the country’s National Institute for Space Research for exposing the extent of it.

Criticism from various sides, especially from abroad, forced Mr. Bolsonaro to accept more measures to combat deforestation in 2020. He had threatened to withdraw Brazil from the Paris Climate Agreement but backed down.

He also appointed his vice president, General Hamilton Mourão, to head the Amazon Council, set up to coordinate environmental policies in the region and attract international grants from countries like Germany and Norway, sponsors of a $500 million fund for ecological preservation initiatives.

Adding on the pressure for Mr. Bolsonaro to do more about deforestation, agribusiness exports have become endangered by Brazil’s increasingly poor environmental reputation. The bad press also threatens a trade agreement with the European Union. French President Emmanuel Macron, who has emerged as one of Brazil’s main international critics, even backed an international intervention in the Amazon during a G-7 summit.

Responding to critics in July, Mr. Mourão acknowledged that the Bolsonaro government’s preservation work “started late,” but he charged that “simplistic and skewed narratives” about deforestation do not accurately reflect the government’s policies.

Cardinal Hummes: “Rebuilding Brazil’s credibility before the world will take a lot of time and concrete results.”

“Rebuilding Brazil’s credibility before the world will take a lot of time and concrete results,” Cardinal Hummes said. For now, he said, “one cannot believe in a real change in direction by this government.” He added that, even if the official discourse is softening, “the real intention is to distract” from the ongoing ecological degradation of the Amazon.

The Observatório do Clima, a group that brings together several environmental organizations, said that Mr. Salles “is directly responsible for the uncontrolled deforestation, which turns Brazil into an international pariah and threatens to take away investments when they are most needed [for] the recovery in the post-pandemic era.”

Cardinal Hummes believes that Mr. Salles’ statements are “a dishonest way to leave everything as it is and even to speed up the devastation of the territory, while distracting public opinion with many meetings, speeches, theoretical, ideological and political discussions.”

The ecologist Ima Vieira, who was an expert at the synod, told America that creating a development model for the Amazon cannot be an isolated project but should be comprehensive and shared by all civic actors and concerned Amazonian states. According to Ms. Vieira, a researcher at the Emilio Goeldi Museum and an advisor to Repam, the main conflict in the region is between powerful multinational economic interests, especially in agribusiness and mining, and local communities that wish to promote ecologically sustainable initiatives.

“There is an interest in the appropriation of regional goods by the private sector, ignoring the needs of local actors,” she said. “It is necessary to question whether it is possible to build a new development paradigm in the Brazilian Amazon, reconciling and converging such diverse interests. I do believe it is.”

Ms. Vieira confirms that the inspection, control and monitoring of forests have decreased over the past two years. She believes the government stewards of the Amazon should aim for “zero deforestation and degradation.”

Sustainable forest management techniques have been applied on a small scale by many communities. She also proposes the formal demarcation of Indigenous lands and areas that for centuries have been home to Afro-Brazilian communities (known as quilombola). In most cases, demarcations have been pending for years.

“Mining and illegal logging bring huge risk to Amazonian communities, and this has been [adversely] impacting the territory and the peoples by perpetuating high deforestation and fire indexes,” she said. “We should be encouraging a forest economy that preserves local peoples’ rights to use and manage their lands, avoiding the clearing of native forests, as well as promoting justice, social equality and respect for cultural diversity,” Ms. Vieira said.

[Read this next: What the Catholic Church is doing to protect the Amazon in Bolsonaro’s Brazil]