How Covid-19 made sex trafficking in Latin America much worse 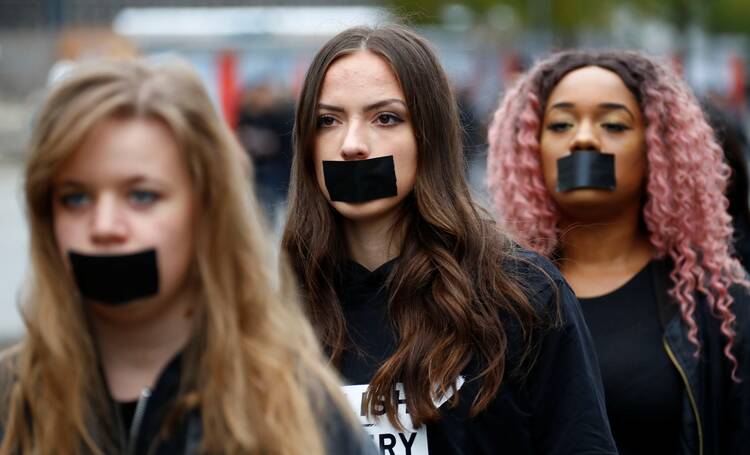 Activists in Berlin take part in a "Walk for Freedom" to protest human trafficking in 2018. Caritas Internationalis issued a statement July 28, 2020, that said insufficient attention "was paid on the collateral damage of the ongoing pandemic, especially on migrants and informal workers, who are now more exposed to trafficking and exploitation." (CNS photo/Fabrizio Bensch, Reuters)

The trafficking of women in Latin America has increased with the Covid-19 pandemic, according to church activists who support the victims of sexual and labor exploitation in the region. Perpetrators have also changed how they lure and abuse young women, mainly by using digital devices.

“The economic crisis left many women without any income. Poverty, confinement and amplified violence generated a situation of more vulnerability for them,” said Carmen Ugarte García, an oblate sister and coordinator of Red Rahamim, a Mexican network of religious people who support victims and work on prevention.

Sister Ugarte’s movement is part of the Rome-based Talitha Kum, a network of initiatives led by women religious congregations against human trafficking. On July 30, the World Day Against Trafficking, several of the Latin American Talitha Kum members reported an escalation in activity, Sister Ugarte told America.

“Reporting [it] has always been something hard and scary for those women. Now it’s even more difficult, given that throughout the continent the police and the courts are much more inaccessible, with the imposition of social distancing measures,” she said.

“Many women are homeless, so they have to prostitute themselves to pay the rent."

Traffickers transport women from Central and South America through Mexico, Sister Ugarte said. Even though travel through Latin America is now restricted because of the pandemic, traffickers continue to victimize migrants and refugees. Within Mexico’s borders, young women have been abused in several ways.

“Many women are homeless, so they have to prostitute themselves to pay the rent. Others are forced by their own husbands to do so—something that has increased during the Covid-19 crisis,” she said.

At the beginning of the pandemic, with hotels shut down, trafficked women were forced to meet with men on the street or in their own homes. In Mexican coastal tourist destinations, Sister Urgarte reported, there has been a sharp climb in violence against women. At the same time, the confinement brought about by the pandemic boosted digital forms of recruiting and abusing teenagers and young women.

“We received several reports concerning fake modeling agencies that required the girls to expose themselves through a webcam,” Sister Ugarte said. A five-minute online video interaction may suffice for traffickers. After recording them in a compromising state, they pressure their victims to give into their demands.

That situation led Colombian Catholic activists to change their strategy, explained Gisell Rivera Melo, a member of the Defenders of Lives network, an initiative of the Daughters of Charity of St. Vincent De Paul against human trafficking.

“The demand for webcam pornography allegedly grew by 30 percent with the pandemic. Reports on sexual exploitation related to that industry abound. So we had to increase our presence on the internet in order to work on prevention,” she told America.

Despite their adaptation to the web, the usual recruitment mechanisms are the same. Traffickers look for girls and young women, ages 12 to 25, and offer them a job in a big city like Bogotá or Medellín, Ms. Rivera explained. “Normally the victims have dysfunctional families and many times have suffered abuse, which impacts their self-esteem and body image,” she said.

In Colombia, many trafficked and exploited women are Venezuelan immigrants. The Catholic organizations that form the Red Tamar (Tamar Network) against human trafficking have implanted operative centers at strategic spots near the border over the past few years, but now things seem to be out of control. “In Bogotá, there’s a tolerance zone for prostitution where such activities occur with total freedom. There’s a large concentration of immigrants and teenagers there,” Ms. Rivera added.

Indeed, immigrants and refugees are particularly in danger of human trafficking, abuse and exploitation. According to Sister Ugarte, as they flee their own country, Venezuelan women are being forced into prostitution throughout Latin America.

“We have given refuge to 12-year-old girls who worked from 6 in the morning to 11 in the night and were also sexually abused in Brazil.”

The same happens with Central American immigrants. In El Salvador, criminal gangs frequently try to exploit undocumented immigrants and Salvadoran women who have been deported from Mexico and the United States, according to Carmela Gibaja, a member of the congregation of the Sisters of the Guardian Angel, who works against human trafficking.

“Little can be done now with the quarantine. But we’ve been trying to act in the marginalized communities where we’re present. Church institutions that help deportees, asylum seekers and migrants have been making an effort to deal at least with the emergencies,” she told America.

Sister Gibaja said that reported violence against women in El Salvador has increased by 70 percent during the pandemic. Between March and May a woman was raped every seven hours according to the country’s National Civil Police.

The lack of control on Latin American borders has long facilitated international human trafficking in the region. The pandemic left victims even more vulnerable, despite authorities, in many cases, having closed the borders and deployed teams to enforce anti-pandemic protocols.

“Since the Covid-19 emergency began, at least 100 teenagers have been abandoned at the Friendship Bridge [which connects Paraguay and Brazil],” María Julia Villalba, a sister with the Congregation of Our Lady of Charity of the Good Shepherd, told America. Most of the teenagers had been taken to São Paulo, the largest city in Brazil, to work in the textile industry. With the economic crisis, many businesses closed, and they were taken back to the border by the human traffickers.

“We have given refuge to 12-year-old girls who worked from 6 in the morning to 11 in the night and were also sexually abused in Brazil,” said Sister Villalba, whose congregation runs a shelter for girls who suffered from human trafficking in Asunción, Paraguay.

The most impacted areas are the ones closer to Ciudad del Este, on the border, she said. “The operations of the human trafficking gangs are only possible because of the total absence of control on the border. The girls tell us that they just come and go, and nobody asks them anything,” Sister Villalba said.

The Sisters of the Good Shepherd’s shelter works with the Paraguayan government to give temporary housing to rescued victims. The teenagers spend up to six months at the facility, studying and receiving medical and psychological attention.

“Some of them are pregnant. Others arrive with several wounds,” Sister Villalba said. “We give them shelter while the situation with their families is resolved. Sometimes their own parents had been involved in the crime, so we have to look for another relative who can be with them.”

With the pandemic, the shelter had to suspend some of the educational courses that are normally offered to the girls. Newcomers must be isolated for two weeks until they are taken to the collective house.

In Brazil, the pandemic forced São Paulo’s Marginalized Women Pastoral Commission to establish a communication group with the women it supports, following the events in the community at distance. The commission works with human trafficking victims and prostitutes.

“In our last in-person meeting, in March, they agreed they would try to help each other and would tell us what’s going on. When somebody is infected or dies, they inform us,” according to Sister Elizângela Matos dos Santos, coordinator of the group.

Two times a week, the victimized women visit the commission’s office to get food supplies and hygiene kits. “It’s sad, because they want to talk, to be heard. Many of them are suffering violence at home,” she said.

Sister dos Santos affirmed that the economic crisis has made many women desperate, and they end up accepting phony job proposals that involve moving to other Latin American countries. “They often don’t recognize a dangerous situation. I try to warn them of the risks, but they tell me: ‘My life is worse here.’ Many women are being trafficked to Peru, Bolivia and Mexico,” she said.

Sister dos Santos believes that the economic crisis in Brazil makes even more women vulnerable. “We now have massive unemployment in the country and our government doesn’t do anything for those people,” she said.

Throughout the continent, Catholic organizations have been distributing food, medicines and hygiene kits for vulnerable women and for the victims of human traffickers. In Argentina, the Kawsay Network has been working with community organizations to provide basic support to women who had to prostitute themselves.

Argentina’s National Program of Rescue and Accompaniment of Human Trafficking Victims has rescued 200 people since the pandemic started—67 percent of them subjected to labor trafficking and the rest to sexual trafficking.

According to Sister Ugarte, hundreds of female Catholic organizations are currently involved in the fight against the problem in Latin America. For different reasons, women have taken the lead in the process. “It was a man who deceived and subjected each victim, so it’s hard for many women to trust any man again. They prefer to talk to us,” she said.

Slowly, however, things have been changing. “Lately, religious men have been joining us, and a few bishops are committed to work on this issue,” she said.