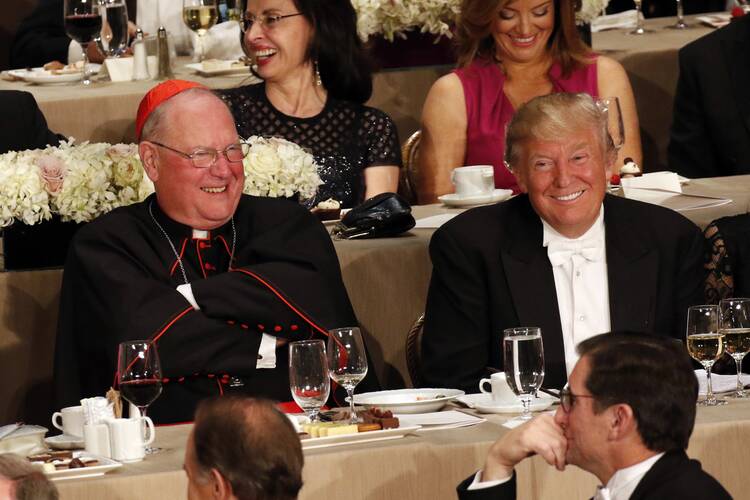 CLEVELAND (CNS) -- Cardinal Timothy M. Dolan of New York confirmed he has accepted an invitation from the Republican National Committee to offer a prayer at the party's nominating convention.

The convention opens Aug. 24 with limited attendance by delegates and party officials and runs through Aug. 27. The proceedings will be livestreamed.

Cardinal Dolan will offer the prayer as the convention opens, the same day President Donald Trump and Vice President Mike Pence will be nominated as the Republican Party's candidates for a second term.

"As a priest, one of my most sacred obligations is to try and respond positively whenever I am invited to pray," Cardinal Dolan said in a statement Aug. 18. "Prayer is speaking to God, offering him praise, thanking him for his many blessings, and asking for his intercession; it is not political or partisan.

"That is why I have accepted an invitation to pray at the Republican National Convention," the statement continued. "My agreeing to pray does not constitute an endorsement of any candidate, party, or platform. Had I been invited to offer a prayer for the Democratic National Convention, I would have happily accepted, just as I did in 2012."

Cardinal Dolan added that he hoped "during this tumultuous time in our nation’s history" religious and nonreligious people "might join together in seeking peace and reconciliation in our hearts, in our cities, and in our country."

The convention has been scaled down to be in line with North Carolina limits on gatherings under the coronavirus pandemic.

In April, Cardinal Dolan was among a group of prelates who joined a conference call that included 600 Catholic leaders and educators with Trump to press for federal support for Catholic schools, which continue to face economic hardships because of the pandemic.

[Related: Cardinal Dolan defends comments about Trump, argues he has critics on both sides]

Both the cardinal and the president spoke of their long friendship during the call.

Addressing political conventions is not new for Cardinal Dolan. In 2012, he offered prayers at both the Republican and Democratic national conventions.

Then president of the U.S. Conference of Catholic Bishops, Cardinal Dolan prayed for the unborn, alluded to same-sex marriage and urged a renewed commitment to religious liberty. A week later during the Democratic National Convention, he also prayed for the unborn in his closing benediction "that they may be welcomed and protected."

The GOP's platform on abortion is generally viewed as closer to the Catholic Church's teaching than the Democrats' platform, which supports legal abortion.