Cardinal Dolan defends comments about Trump, argues he has critics on both sides 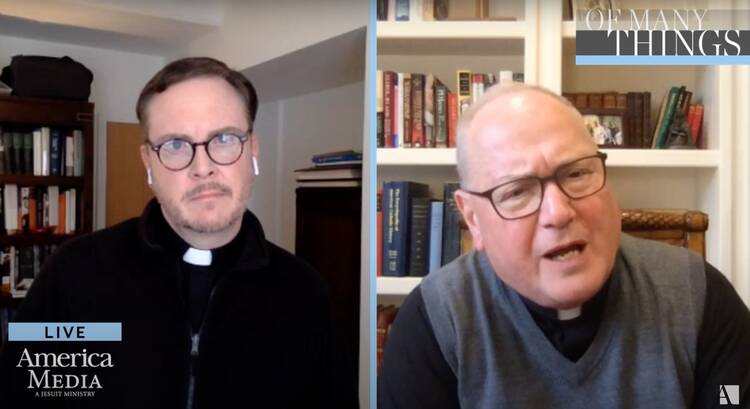 Cardinal Timothy Dolan, facing criticism because of his complimentary words about President Trump during a recent conference call with the president and again during an appearance earlier this week on Fox News, defended his engagement with the White House in an interview with America on May 1.

“I just say, look, are we in the sacred enterprise of accompaniment and engagement and dialogue?” the cardinal said. “When you do it, you risk criticism on both sides.”

The New York archbishop said he has also been criticized for his cooperation with Democratic political leaders, including Sen. Chuck Schumer and Mayor Bill de Blasio.

Cardinal Dolan said he has not read any of the critical comments, though he said he was aware they exist, and added that Catholics are called to participate in political life without becoming overly partisan. He did not address his comments on the “Fox & Friends” show in which he praised Mr. Trump’s handling of the coronavirus pandemic.

“We are...in politics without being part of it,” Cardinal Dolan said. “We are very interested in political principles. We’re not all that interested in partisanship. When you get kind of singed from either side, that’s not a bad place to be,” he said.

”Are we in the sacred enterprise of accompaniment and engagement and dialogue?” Cardinal Dolan asked. “When you do it, you risk criticism on both sides.”

Catholics, who were for decades reliably Democrats, the cardinal said, are more politically diverse. He described that political diversity as healthy. “I kind of think it’s good when sociologists speak and say the Catholic vote is not monolithic. I guess that means we’ve got thoughtful, reflective people who are trying to apply Catholic principles to the moral decisions they’re making,” he said. “Not bad.”

Some critics said that they were disappointed that Cardinal Dolan and other Catholic leaders on the call, which was convened to highlight the financial challenges facing Catholic schools, did not raise issues where the church has clashed with the Trump administration, such as immigration, health care and climate change. They noted that Mr. Trump used his remarks on the call to ask for Catholic support in November’s presidential election, citing his work on abortion and religious liberty.

The progressive advocacy group Faith in Public Life, for example, released a letter on May 1 expressing disappointment with Cardinal Dolan’s appearance on Fox News.

“Your recent phone call with President Trump and appearance on Fox News sends a message that Catholic leaders have aligned themselves with a president who tears apart immigrant families, denies climate change, stokes racial division and supports economic policies that hurt the poor,” said the letter, signed by 1,000 Catholics. “There is nothing ‘pro-life’ about Trump’s agenda.”

“Please speak truth to power and refrain from giving even the appearance that bishops have their hands on the scales in this election,” the letter continues.

And an editorial in the National Catholic Reporter said while past presidents have enjoyed varying levels of friendship and engagement with U.S. bishops, Mr. Trump’s record should give pause to church leaders considering engaging the White House.

“Certainly, it is without precedent that the leadership would cozy up so cravenly to a president whose most consistent attribute is an uncontrollable propensity for lying, continuously and about everything. He is dangerously disconnected from reality and is defined by characteristics that normally are condemned from pulpits,” the editorial reads.

Others defended Cardinal Dolan’s engagement with Mr. Trump, including Matt Malone, S.J., the editor-in-chief of America who interviewed the cardinal on Friday.

While acknowledging that “some Catholics have criticized the bishops for how they conducted this call,” Father Malone wrote on April 28, “the bishops made a good tactical choice” in choosing to engage with the White House.

“They had 30 minutes with the man who, for better or for worse, is president of the United States,” he wrote, adding that the bishops were correct to focus on aid to Catholic education, an area in which Mr. Trump is “inclined to agree with them and might be willing to do something.”