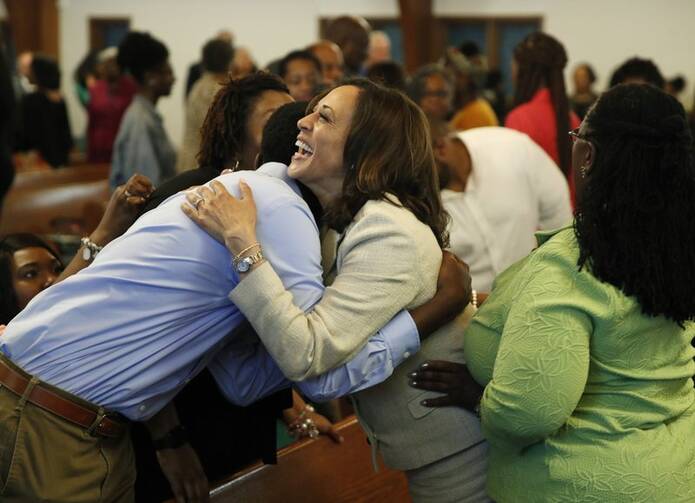 Kamala Harris, tapped on Tuesday as Joe Biden’s running mate, attended services at both a Black Baptist church and a Hindu temple growing up – an interfaith background that reflects her historic status as the first Black woman and woman of South Asian descent on a major-party presidential ticket.

The 55-year-old first-term Democratic senator, whose name means “lotus” in the Sanskrit language, identifies as a Baptist as an adult and brought another faith into her life in 2014 when she married Douglas Emhoff, a Jewish attorney. Their wedding featured the breaking of a glass, a Jewish tradition, and Harris’ stepchildren gave her the nickname of “Momala,” a rhyme with her name that recalls the Yiddish term “mamaleh.”

During a 2017 speech at a historic Black church in Atlanta, Harris invoked both of the faiths she encountered as the daughter of immigrants from Jamaica and India.

Attending Oakland’s 23rd Avenue Church of God as a child, Harris said, “we’d learn about caring for the least of these. And I sang in the choir about how faith combined with determination will always see us through difficult times.”

Harris added that her mother also took her and her sister to a Hindu temple “to see that all faiths teach us to pursue justice.”

She also used that speech to portray her approach to high-profile prosecutorial positions, first as San Francisco district attorney and later as California’s attorney general, as rooted in the biblical “concept of redemption.”

Review: Kamala Harris in her own words
Brandon Sanchez

“(W)e will all make a mistake, and for some that mistake will rise to the level of being a crime,” Harris said. “But is it not the sign of a just society that we allow folks a way to earn their way back? That is the concept of redemption.”

Harris attends services at the Third Baptist Church of San Francisco, led by pastor Rev. Amos Brown, who lauded her as “a quintessential scholar” who would unite “the spirituality, the genius and the nonviolent traditions” of her parents’ backgrounds and of the African American community.

While she has not spoken about her faith as frequently as Biden, Harris at times invoked biblical values during her Democratic presidential primary bid, which ended last year. During remarks at a forum hosted by the Poor People’s Campaign, a national effort to combat poverty co-chaired by the Rev. William Barber, Harris pointed to the parable of the Good Samaritan as a guidepost.

That biblical parable is “about defining who is neighbor,” Harris said, as not someone “who shares your zip code” or “drives the same kind of car,” but about connecting with the needy and those seeking refuge and “understanding that we are all each other’s brothers and sisters.”

Religious groups that weighed in on Harris’ selection largely split along ideological lines, with the Jewish Democratic Council of America hailing her selection while the Republican Jewish Coalition decried it. Harris’ support for abortion rights also sparked criticism from Priests for Life, an anti-abortion group led by a Catholic priest and longtime backer of President Donald Trump.

Elana Schor, Associated Press
Provide feedback on this article
Join the conversation: Login or create an account
Before you can comment, you need to update your profile to include your first and last name, as required in our comments policy. Then reload this page and you'll be set up for commenting. Update your profile