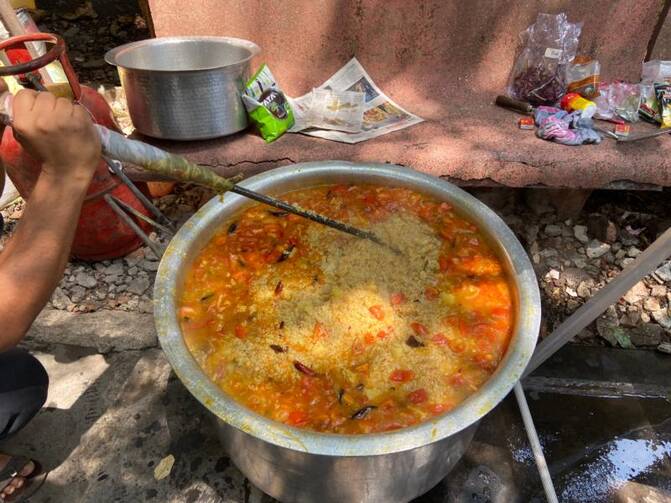 PHOENIX (CNS) -- On the international level, Covid-19 is not just a public health issue, but it also is a hunger issue, said the Rev. Nicta Lubaale in an online webinar about the current status of world hunger during this pandemic.

"Let us pull together and know that we are living in a world where malnourishment has been spiking up from levels of 2015. With the disruptions of Covid-19, we can see more hunger," said Rev. Lubaale, who is general secretary of the Organization of African Instituted Churches.

He was one of three speakers participating in a July 8 webinar sponsored by Georgetown University's Berkley Center for Religion, Peace and World Affairs and focused on worldwide hunger and how the Covid-19 restrictions have gravely affected the areas where hunger already was at the forefront.

A continent where many countries have been affected by hunger prior to this pandemic is Africa, but now with Covid-19 lockdowns, the economy globally is taking a hit and making hunger a more fatal reality.

To address hunger, agriculture must be a top priority, because it is what most people rely on for income, said Rev. Lubaale.

"No. 1, put agriculture at the center," said Rev. Lubaale. "In Southern Africa, over 70% of the population derives its livelihood from small agriculture -- that is the priority for the governments."

Lister Nynag'anyi, director of development services with the Anglican Diocese of Central Tanganyika, based in Dodoma, Tanzania, said the pandemic caught the country in the middle of famine season.

"The Covid-19 has come in a time where Dodoma is in a critical state," said Nynag'anyi. "For us, much is in the middle of the famine season. It happened in not the best time. You can imagine how farmers were disrupted."

Asma Lateef, director of Bread for the World Institute and interim executive director for the Alliance to End Hunger, said this current crisis has brought to light the issue of world hunger.

"Five years ago, the world agreed on the (U.N.) sustainable development goals including the goal to end hunger" by 2030, said Lateef. "That set of goals really put people and the world at the center. Ever since then, we have seen an increase in hunger in almost every year since we have agreed to honor these goals. That should have been a wake-up call. COVID has gotten the attention. We cannot waste this moment where every single person in this world is experiencing this."

"There have been 820 million hungry prior to this crisis," Lateef added. "The alarm has grown, but the head of the (U.N.) World Food Program is really making the case that we have 130 million who are in food crisis. If we do not act now, that number can double by the end of the year. There is an urgency to act, and I think as advocates we are trying to make that case with U.S. decision-makers."

Rev. Lubaale said it is the faith community that provides hope to its people and this community is working to bring this hope back into Africa's poorer communities.

"The issue is to reenergize the hope," said Rev. Lubaale. "That is what the faith communities do -- to bring back the hope and people being in church. That is one of the areas that we have been working on and strengthening."

Nynag'anyi said church attendance has declined since the pandemic began. This has hurt the sense of community and does not help rebuild the hope that Rev. Lubaale described.

In the majority of countries, Covid-19 has forced houses of worship to close. Only in recent weeks have some been able to reopen but with strict limits on congregation size and only if they adhere to strict protocols to stop the spread of the coronavirus.

"In terms of faith, we have recorded a decline in church attendance," said Nynag'anyi. "Members feels that they might contract the illness from attending church. We are also seeing a decline in offerings (donations) from people. Those people are not coming to church as expected. ... Covid-19 has not allowed it."

Another aspect of community life affected by Covid-19 has been schools. The Diocese of Central Tanganyika runs the schools and Nynag'anyi said the pandemic has affected the students there.

"With a majority of our students coming from poor families, there has been a lack of access to resources like learning facilities," said Nynag'anyi. "There will be poor performance in areas within the schools."

He added that with some schools now open, teachers feel a need to catch up and rush through material for the students, who aren't really getting to learn with this "crash program."

The panelists also commented on how in the United States, there have not been sufficient protections from the coronavirus for those workers deemed essential and who continue to work while many other sectors have been in lockdown.

"Food systems and food productions are deemed essential here in the U.S.," said Lateef. "Yet the people who work in the food system, who are essential workers, are not afforded the protections they need to stay safe in this crisis. The anxiety that Nicta and Lister described are also felt here. We are seeing that play out in the meat packaging and agriculture section as well as the service sector."

In addition, Lateef said, service workers don't make enough income to put food on the table for their families, which creates inequities in American society.

Communities can demand a resolution to hunger and other issues, but it's the countries' leaders who have the power to mobilize solutions and get results, the speakers said.

"Africa's hunger and poverty is not a shame to the poor and hungry people," said Rev. Lubaale. "It is a shame to us -- the leaders. ... Prophetically, it is important for us to know that it is possible to end hunger. We should start with such vision rather than talk about what we don't want."

The groups in a July 1 letter urged lawmakers to boost provide $10 billion to $15 billion in aid for the more than 70% of countries the Centers for Disease Control and Prevention has described as ill-equipped to handle outbreaks of the illness caused by the novel coronavirus. Besides hunger, they said, these countries need economic assistance and funds to address humanitarian and developmental needs.

Juan Carlos Ramirez, Catholic News Service
@openpublish
Provide feedback on this article
Join the conversation: Login or create an account
Before you can comment, you need to update your profile to include your first and last name, as required in our comments policy. Then reload this page and you'll be set up for commenting. Update your profile