The Catholic Church’s fight against gender-based violence in Nigeria 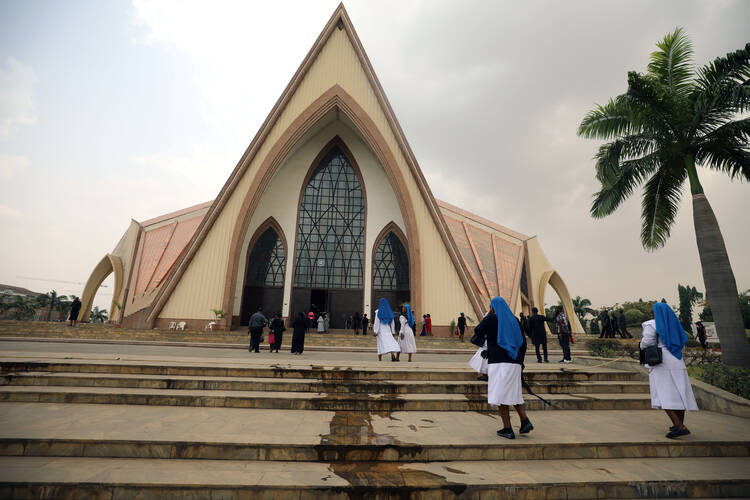 In June, Uwaila Vera Omozuwa was raped and murdered in a church in Benin, a city in midwestern Nigeria. Ms. Omozuwa, a 22-year-old university student, had gone to study inside the church where she was killed.

The police say a suspect linked to the killing has been arrested after fingerprints on a fire extinguisher used during the attack were examined.

The incident sparked protests across the country, with activists and campaigners calling for justice for Ms. Omozuwa and other victims of gender-based violence in Nigeria.

The Nigerian governors’ forum declared a state of emergency—and Amnesty International urged the national government to do the same—because of the upsurge of violence against women, and its 36 governors promised to participate in a national sex offender registry in response to the protests.

Gender-based violence happens frequently in Nigeria. According to a Unicef survey, 25 percent of Nigerian girls say they have experienced sexual violence before the age of 18; 10 percent of boys report the same.

The Nigerian governors’ forum has declared a state of emergency because of the upsurge of violence against women.

An anti-gender-based violence law signed in 2015 has been poorly implemented, said Olu Omotayo, a human rights lawyer who heads the Civil Rights Realisation and Advancement Network.

“Some states have not used the provisions of the law to prosecute offenders, and this can be seen in the rise in these cases [gender-based violence],” he said.

Of Nigeria’s 36 states, only 13 have ratified and signed the law.

Less than a week after Ms. Omozuwa’s killing, another student was raped and murdered by gunmen. Since the coronavirus lockdown started on March 30, more than 3,600 cases of rape have been reported, along with homicides and other acts of brutality against women, according to Pauline Tallen, Nigeria’s minister of women affairs and social development.

The African Faith and Justice Network, a Catholic advocacy group based in Washington that sponsors a strong local program in Nigeria, has responded by hosting online workshops to raise awareness about gender-based violence and its prevention among young people.

“The increasing violence against women is a violation of who we are as a human community,” said the Rev. Aniedi Okure, A.F.J.N.’s executive director. “It is a crime against nature, and it unsettles me to see gender-based violence being reported in this pandemic.”

“I have seen victims and you can see that they are literally out of themselves,” Father Okure said. “They would wish they could get another body and reject the one they are currently in after they have been violated or abused.”

Since it was established in 1983, the network has been working with Nigeria’s Catholic dioceses, religious communities and sisters from 28 congregations to promote peace, advocate for human rights and dignity, and advance social justice. It also offers moral and legal support for victims of abuse.

“We want to promote the dignity of the human person, that each of us is created in the image of God,” said Father Okure. “Whatever we do, we must understand and appreciate the foundation of the human community because when we violate one another, we are indeed violating God. So we are called to uphold that dignity of each person.

“I have seen victims and you can see that they are literally out of themselves,” Father Okure said. “They would wish they could get another body and reject the one they are currently in after they have been violated or abused.”

The group recently held a two-day virtual workshop for about 70 young people selected from across Nigeria that explored advocacy against gender-based violence and hosted discussions about combating rape and other physical and psychological attacks against women. A.F.J.N. often had to pay for internet access so these young Nigerians could join in.

“We told them that you cannot be seeing this [violence against women] happening and continue to keep quiet,” Father Okure, who was one of the moderators at the workshop, said. “Because when you see something and do nothing, then you are empowering it and becoming a part of it. When these things happen, we cannot be neutral; when you refuse to do something about evil, you are indeed participating in that act.”

“Now, whenever I see cases of rape, I ask myself why we keep seeing this every day, and what can we do to make our world free from violence and rape cases and child molestation.”

Nobody is too small to make a difference, he added. “We tried to tell them they can be part of the movement to end violence against women. We told them that younger people around the world like them are making things happen, so they can do it.”

The Rev. Jude-Mary Owoh, a Dominican priest and head of the social media department at Dominican University in Nigeria’s southwest region, led a discussion on how to use social media for creating dialogue and advocacy around gender-based violence.

Before Covid-19 put an end to in-person instruction, A.F.J.N. trainers had been able to visit Nigerian communities “to talk with elders and community leaders on the need to act as vanguards to eliminate gender-based violence,” said Eucharia Madueke, a Sister of Notre Dame de Namur who is the coordinator of A.F.J.N.’s African Women project. “If the community leaders and parents cannot perform their duties of protecting children and girls, then there is a problem.

One week after the training, the A.F.J.N. sponsored an evaluation session where participants shared their experiences of the virtual engagement. Many had already started to take action against gender-based violence in their local communities and opened conversations on social media.

“They are now recruiting new members and organizing small groups in their communities and visiting villages around them where they teach them what they learned during the training,” Sister Madueke said. “They are networking and living up to the realities around them. At the end of the workshop, the first thing they said was that ‘We have to start speaking out,’ and they are doing that now.”

“The workshop was an amazing learning experience and I gained a lot on how to fight gender-based violence,” said Iyah Abraham. “Before now, I always saw cases of rape on TV and social media and I felt little concerned [about them] or showed concern for victims. But after the training, I feel I have a responsibility to humanity to be part of the movement to end rape and bring about a changed society.”

Mr. Abraham said he has formed a team with four of his friends to begin a social media campaign against rape and gender-based violence.

“Now, whenever I see cases of rape, I ask myself why we keep seeing this every day, and what can we do to make our world free from violence and rape cases and child molestation.”

The training “opened our eyes to the history of this abuse of women and the extent to which it has gotten,” Chisomebi Ilodigwe, one of the female participants, said. “The church is actually doing a lot, but I feel they should do more because just a few people know that they have a right to speak up. Some people are scared, while some want to speak up but feel they don’t have the support to do that.”

The society sometimes mocks victims, which discourages them or makes them feel they made wrong choices, Ms. Ilodigwe explained. “But the church can reach out more to these victims to speak to them and encourage them and show them that they have [our] support.”