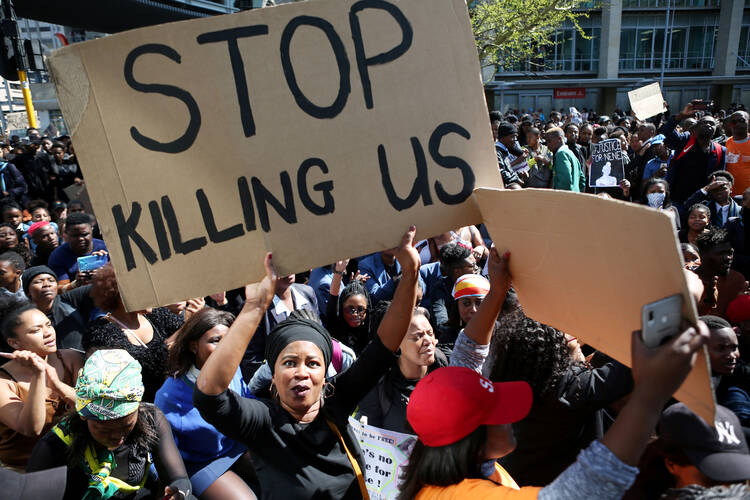 A woman holds a sign as demonstrators gather in September 2019, at the World Economic Forum on Africa in Cape Town during a protest against gender-based violence. (CNS photo/Sumaya Hisham, Reuters)

On June 20, Amahle Quku’s bruised body was found in the street in Browns Farm, Philippi—a large semi-urban area in Cape Town. Her clothes had been ripped off; she had been raped and murdered. A 25-year-old man, Leonard Mzingeli, was taken into custody by the police in connection with her murder.

Ms. Quku, 17, an 11th-grade student at Sinethemba High School, was the pride of her family. They learned about her death when her picture began circulating on social media.

South Africans were outraged by the gruesome murder. Social media hashtags trended with calls for justice and stronger action to protect women and children from killers and sexual predators. Sadly, Ms. Quku is not alone.

A wave of killing of women and children has horrified the country in recent weeks since the gradual easing of the coronavirus lockdown restrictions on June 1. The police say the end of the nine-week ban on alcohol sales contributed to a spike in crime and gender-related violence directed at women and children.

A wave of killing of women and children has horrified South Africans in recent weeks since the gradual easing of the coronavirus lockdown restrictions on June 1.

With one of the highest rates of violence against women in the world, gender-based violence is not a new problem in South Africa. A woman is murdered in South Africa every three hours.

According to the South African Police Service, gender-based violence against women has been trending higher over the last two years. Altogether almost 180,000 crimes against women were recorded in 2018 and 2019.

More than 2,700 women were murdered, and almost 3,500 were victims of attempted murder. South African women were victims of almost 83,000 cases of assault; more than 54,000 of these were recorded as assault with the intent to cause grievous bodily harm.

In early June, Altecia Kortjie, 27, and her 7-year-old daughter, Raynecia, were found dead in South Africa’s Western Cape province. Ms. Kortjie had suffered multiple stab wounds while her daughter was found on the bathroom floor. The police who found their bodies confirmed that a 28-year-old man who is known to the victims had been arrested.

The country was still reeling from the shock of their murders when a funeral was held for Naledi Phangindawo on Youth Day, a national public holiday that commemorates the 1976 Soweto youth uprising. Ms. Phangindawo, 25, died after she was attacked with an ax and a knife by her ex-boyfriend. The suspect later handed himself over to the police.

South African bishops: “We continue to witness shocking incidences of mindless and callous killings of innocent women and girls which amounts to a civil war.”

In the wake of the killings, the South African Catholic Bishops Association’s Justice and Peace Commission said it “strongly and unreservedly condemns the recent surge of gender-based violence and femicide that has once again reared its ugly head nationwide since the country entered alert level 3 of Covid-19 lockdown. We continue to witness shocking incidences of mindless and callous killings of innocent women and girls which amounts to a civil war.”

“We fear men. We trust no men,” they chanted as they demonstrated.

In recent weeks, 21 women and children have been killed, President Cyril Ramaphosa confirmed during a televised presidential address on June 17. Mr. Ramaphosa referred to the killings as a second pandemic.

“It is with the heaviest of hearts that I stand before the women and girls of South Africa this evening to talk about another pandemic that is raging in our country—the killing of women and children by the men of our country,” he said during the address. “As a man, as a husband and as a father to daughters, I am appalled at what is no less than a war that is being waged against the women and the children of our country.

“At a time when the coronavirus pandemic has left us all feeling vulnerable and uncertain, violence is being unleashed on the women and children of our country with a brutality that defies any form of comprehension,” he said. “We will not forget them,” he added, speaking of the victims of femicide, “and we will speak for them where they themselves cannot.”

“If you are a woman in South Africa, it’s not just dignity and equality that you worry about but also your life,” said Russel Pollitt, S.J., the director of the Jesuit Institute of South Africa and a contributor to America. He sees the violence as a “kind of soul sickness” infecting the men of South Africa “in the dark places that we don’t venture into or talk about.”

“It’s scary how many women in my life have been victims of rape or attempted rape. Victims should really get justice, and the government should be stricter with penalties.”

Father Pollitt notes that South Africa has a history of violent repression, which could be contributing to contemporary violence.

“The cultural norms in South Africa see women as ‘less’ than men. We have to confront our cultural bias,” he said. “I think that the high rate of religious adherence in the country means, too, that the roles of men and women are interpreted through religious systems and beliefs.” In those systems, he added, “women are often portrayed as subservient, which can give rise to violence from men who see a need to assert their dominance.”

Mpumelelo Mnyamana was raped when she was 9 and suffered an attempted rape in high school when she was 17. Now 21, she believes violence against women in South Africa has become worse and hopes for a stronger response to the problem from the criminal justice system.

“South African men still have the traditional gender-roles mindset about women,” Ms. Mnyamana told America. “They feel women are meant to be under them to cook, wash and clean, and that’s why they are perpetuating the stereotype and crimes.

“This problem has always been there, but the lockdown is just exposing the extent of what we have been facing because the victims are sometimes trapped with their abusers with no help,” she said.

Ms. Mnyamana struggles with the lingering trauma of her experiences. “I’m scared of men now and I’ve been careful since then,” she said.

“I feel safer when I’m with a group of girls than boys, and it’s scary how many women in my life have been victims of rape or attempted rape. Victims should really get justice, and the government should be stricter with penalties.”

The South African government has been responding to gender-based violence in the country by collaborating with activists and civil society organizations to find solutions. Last year, the Gender-Based Violence and Femicide Declaration was launched by Mr. Ramaphosa.

Violence against women in South Africa “has always been there, but the lockdown is just exposing the extent of what we have been facing because the victims are sometimes trapped with their abusers with no help.”

The declaration develops a national strategy to respond to gender-based violence in the country that grew out of discussions at the National Gender-Based Violence and Femicide Summit. Activists say so far the government’s efforts have not been effective.

South African bishops say an “aggressive and holistic approach” is needed to tackle gender-based violence. “We are calling for a process of rethinking the approach to gender-based violence and femicide, drawing parallels from the response to the Covid-19 pandemic that witnessed the involvement of government departments, business sector, civil society and ordinary citizens in their efforts to flatten the infection curve,” the bishops said in their statement.

“Whilst we are encouraged to date by the way the government has responded to gender-based violence in the recent past, which has seen the introduction of harsher punishments for perpetrators, introduction of sexual offenses courts and appointment of a steering committee which has come up with National Strategic Plan, we are of the view that more can and should be done to deal with this scourge.”

The bishops say the church must preach a clear message that God abhors violence against women and children.

“We must also work towards the healing of the victims,” the bishops said. “Our work must be to educate and to prevent gender-based violence. We as church have contributed to this scourge through our denial, our silence, our resistance, and our lack of preparation. Forgive us.”

Father Pollitt said that the church itself needs to reflect more on the problem and how its structures may contribute to it.

“We should also look in our own backyard and ask ourselves in what ways have we used our faith to engender gender violence,” he said. “In many of our faith-based traditions, we have transmitted a message that says being male is prized over being female. We use male images of God; men are in charge of religious institutions and traditions; men interpret sacred texts in which they legitimize the exercise of male power.”

“It’s a problem that men have to face, and this is the most difficult because for the most part, men don’t want to face it. They don’t want to talk about it because men’s attitude toward women has been ingrained in our culture.”

To tackle gender-based violence, Father Pollitt said South Africans need to face the problem in solidarity with victims and all those who want to see an end to it. He added that “healing is an important thing, not just for victims but for men as well who clearly are suffering from something that is leading to this.”

The church could intervene by providing women counselors for victims of gender-based violence, he said. “I see the church having two very distinct roles here—healing the victims but also helping men discover what’s going wrong and helping them come to healing.”

At the site where Ms. Quku’s body was discovered, her friends and fellow students laid wreaths and waited a minute in silence with their heads bowed.

“She was full of life and very vibrant,” Nasiphi Mayathula told local media. “It hurts a lot, and I’m still in shock because I can’t believe that it is true. I’m angry, and I’m also traumatized because that happened near my home.”