After Supreme Court win, what’s next for Dreamers? 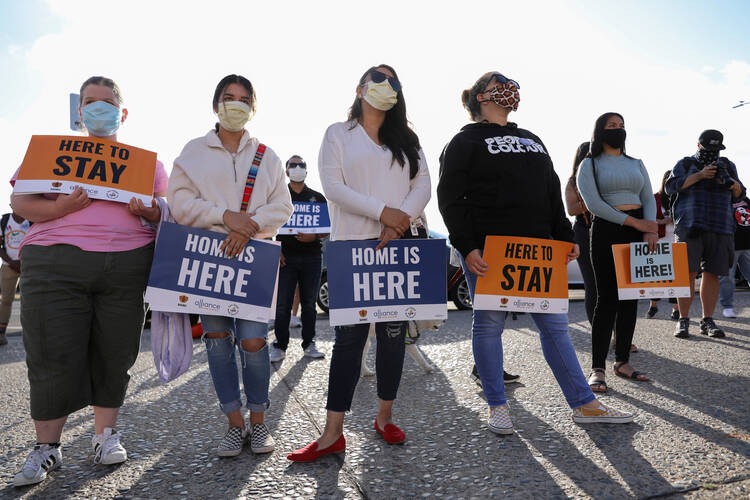 Last month, the Supreme Court halted the Trump administration’s plan to end the Deferred Action for Childhood Arrivals policy. DACA, instituted by the Obama administration, protects undocumented immigrants brought to the United States as children from deportation. But advocates for DACA recipients, known as Dreamers, did not take much time off to celebrate.

The court decision came as a surprise, according to José Arnulfo Cabrera, the director of education and advocacy for migration for the Ignatian Solidarity Network. He called it a positive development, but he also noted that it has taken pressure off Congress to protect Dreamers.

“DACA was always a temporary Band-Aid on a deep wound in our immigration system,” Mr. Cabrera said. An estimated 650,000 immigrants are currently DACA recipients. And on Friday, a federal judge ruled that the Trump administration must now accept new DACA applications.

“DACA was always a temporary Band-Aid on a deep wound in our immigration system.”

But Mr. Cabrera, a DACA recipient himself, noted that the Supreme Court decision suggested there was a proper way to end the policy through executive action. In its 5-to-4 decision, the court simply found that the Trump administration did not follow proper procedures when it announced an end to the program in 2017.

For his part, President Trump has sent out mixed signals. The day after the Supreme Court loss, Mr. Trump threatened on Twitter to try again to end DACA. But last week, he said he would “take care of DACA” as part of a “very, very big merit-based immigration action.” Mr. Trump said that would happen “in the not too distant future, pretty soon.” And earlier this month, he said, “We’re going to have a road to citizenship” for Dreamers.

“Trump is the only one that’s been saying anything,” Mr. Cabrera said, expressing his doubts about a legislative solution. Advocates for Dreamers have been lobbying the Senate to take action, but the pandemic has complicated those efforts, he said. In June, 15 representatives of Jesuit parishes and organizations organized a virtual day of action to lobby for support on Capitol Hill, joined by an aide to Senator Bob Menéndez, a Democrat from New Jersey.

Advocacy efforts will continue until Dreamers are given a pathway to citizenship.

“Just because you’re undocumented, that doesn’t mean you can’t advocate for yourself,” Mr. Cabrera said. “Living undocumented, you’re told you don’t have any rights. But advocating gives them a new sense of hope.” Advocacy efforts will continue until Dreamers are given a pathway to citizenship, he said.

“The quagmire we have at the moment in Congress is that we have so much partisanship,” said Mario Villanueva, the executive director of the Washington State Catholic Conference.

In Washington State, the church has set up a network of legal resources and other financial support for Dreamers, Mr. Villanueva said.

Joe Cotton, the director of pastoral care and outreach for the Archdiocese of Seattle, has helped organize events in Catholic parishes where the faithful can hear directly from Dreamers. Before the pandemic, the archdiocese also set up networking events for Dreamers and facilitated fellowship through dinners and retreats.

DACA recipients: “We still have this target on our backs.”

“We were surprised and delighted that didn’t happen,” he said, adding that Dreamers “are still in a place of uncertainty.” He said that DACA recipients have told him, “We still have this target on our backs.”

Estela Landaverde, the coordinator of Hispanic youth ministry for the Diocese of Charleston, S.C., said the church there has been educating the faithful about DACA and the Dream Act, which would offer a path to citizenship to Dreamers. They are circulating a petition to urge their state’s U.S. senators to pass the Dream Act and are offering legal services to Dreamers through Catholic Charities.

“We have been organizing prayer vigils, online rosaries and online prayer gatherings to strengthen our Dreamers’ spirituality and to show them that their church stands with them and is walking through this process with them,” she said in an email to America. “We want them to know they are not alone.”

“We have been organizing prayer vigils, online rosaries and online prayer gatherings to strengthen our Dreamers’ spirituality and to show them that their church stands with them.”

Ms. Landaverde said DACA recipients have maintained a “hopeful and positive” outlook despite their uncertain future. “I really admire their faith and their resilience,” she said. “They don’t take anything for granted.”

The current status of Dreamers is not sustainable, according to Christopher Kerr, the executive director of the Ignatian Solidarity Network.

“It’s a mixed bag. It’s hard for them to find trust in the president’s remarks the last few weeks,” he said. “Everybody is extremely cautious. What else will be a part of the executive action that could impact their families?”

Many DACA recipients, who have an average age of 26, have children who are U.S. citizens. Six percent of Dreamers are married to U.S. citizens, and 4 percent are married to lawful permanent residents. Many have parents who are undocumented immigrants.

“Their families are still facing a challenging reality and are feeling marginalized by the current administration,” Mr. Kerr said.

According to a Politico/Morning Consult poll from June, most Americans—including most supporters of Mr. Trump—support protecting Dreamers from deportation. Nearly 70 percent of those who voted for Mr. Trump in 2016 are in favor of protecting Dreamers.

In 2012, President Obama took executive action to put DACA into place. While the Trump administration announced plans to rescind DACA in 2017, lower court rulings had temporarily blocked the termination of the program.

The U.S. House passed legislation to create a pathway to citizenship for Dreamers last year, but the Senate has yet to take it up.