Holy Communion: Not banned in Toronto 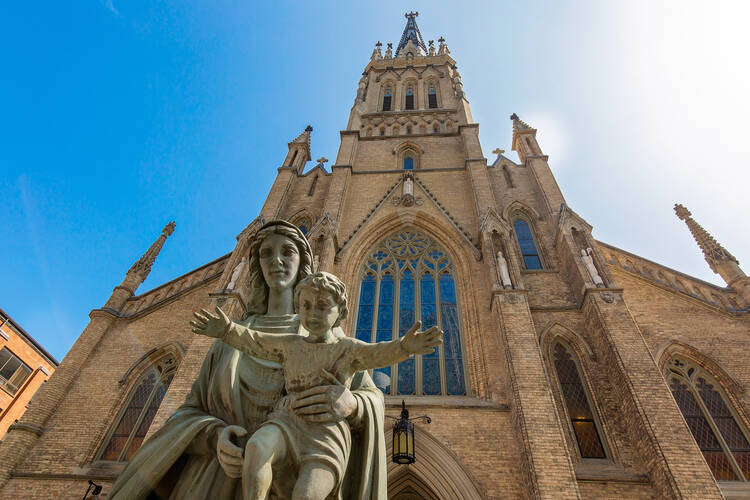 A Catholic-themed Twitter-stoked controversy deflated this afternoon with a couple of raging disputes firmly resolved: Toronto is in Canada, not the United States; and, no, Toronto has not outlawed Communion among the city’s Catholic faithful.

A bemused Neil MacCarthy, the director of Public Relations and Communications for the Archdiocese of Toronto, was caught off-guard by a sudden alarm over religious liberty, fielding calls all morning from reporters across North America demanding to know how the church intends to counter the municipal government’s coronavirus-inspired lockdown of holy Communion.

His response: What lockdown?

Catholics in Toronto, he explained, have been receiving Communion on the hand for the last month since parishes reopened and will continue to do so, following health and safety protocols established by the diocese itself in response to the pandemic. Those protocols have indeed eliminated for the foreseeable future Communion on the tongue and suspended or modified other parish and liturgical practices, among them sharing microphones and filling holy water fonts, with the aim of curtailing the transmission of the coronavirus.

But holy Communion has not been banned in Toronto, he hastened to say.

Church officials had been in regular conversation with Toronto and Ontario officials and received enthusiastic approval of the plan the diocese put in motion to reopen churches and restore Communion at Mass.

Church officials had in fact been in regular conversation with both municipal officials in Toronto and Ontario provincial health officials and received enthusiastic approval of the plan the diocese has already put in motion to reopen churches and restore Communion at Mass.

The city of Toronto had issued public health guidance that called for the suspension of Communion and other communal liturgical practices during the pandemic, but Mr. MacCarthy pointed out that “the city is giving direction not just for Catholics but for everybody.”

Unfortunately, the broadly worded document from Toronto public health officials was seized on by some commentators who reported that Communion in Toronto had been outlawed. That erroneous report, in turn, was amplified by the conservative commentator Laura Ingraham in a tweet on July 17, suggesting that presidential candidate Joe Biden would not vigorously defend religious liberty if he were elected president of the land south of the Canadian border (hence a hashtag trending today on Twitter sarcastically noting that #TorontoisinCanada.)

The phone calls soon followed, according to Mr. MacCarthy.

But in the less dramatic reality inhabited by folks in Toronto, Mr. MacCarthy said, city health officials not only unreservedly approved the diocesan proposal for reopening and the restoration of Communion, they complimented the church proposal for its comprehension and attention to safety. “They said, ‘This is more than we have seen from other faith communities.’”

According to the diocesan plan, communicants must wear masks and approach eucharistic ministers while remaining socially distant from each other, a space described as two meters in this faraway land; they maintain that two-meter distance from ministers until it is time to step forward to receive Communion on the hand.

Communicants “are to leave their mask on when they reply ‘Amen’ (physically distanced) and during the period when the priest or Minister of Holy Communion places the Host in their hand. Then they step to one side, and at that point remove the mask in order to consume the Holy Eucharist, affixing the mask after consumption and returning to their place.”

On June 12 as the province began phase 2 of its four-part coronavirus reopening plan, all houses of worship in Ontario were permitted to open with physical distancing in place and attendance limited to no more than 30 percent of the building capacity. As Communion continues to be received by Catholics in Ontario, provincial health officials maintain an advisory to houses of worship to suspend activities that increase risk of disease transmission, including sharing “books, communion, microphones, prayer mats, prayer shawls, water, etc.”

“Faith community leaders are strongly encouraged to carefully consider how and when to re-establish in-person activities,” Ms. Dubey said. “This is because we know that religious gatherings tend to occur in indoor settings and are generally attended by older populations who are more likely to experience severe impacts from Covid-19.”