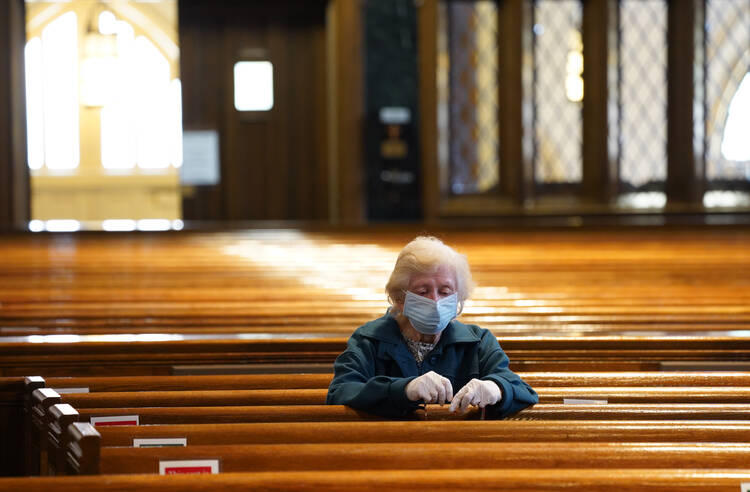 Alice Claus prays the rosary at St. Kevin Church in the Flushing section of the New York City borough of Queens on May 26, the first day the Diocese of Brooklyn, N.Y., permitted its churches to reopen amid the COVID-19 pandemic. (CNS photo/Gregory A. Shemitz)

Social distancing and other restrictions related to the coronavirus pandemic have kept doors at Catholic churches across the country shut for months, and many of the sick and dying and their families have been cut off from the church’s sacraments at a time of acute spiritual need. Then the killing of George Floyd by Minneapolis police on May 25 opened floodgates of protests over racism and police brutality.

Unable to contain thousands intent on protesting despite stay-at-home or social distancing orders, municipal leaders and public health officials seemed to accept a de facto end to statewide lockdowns as city streets swelled with demonstrators. Many states by late May had already loosened coronavirus controls, but in some where restrictions against church services and other religious gatherings were still enforced, the apparent contradiction raised hackles.

A letter released on June 4 and signed by 1,200 public health and medical professionals denounced “white supremacy” as “a lethal public health issue that predates and contributes to Covid-19” and offered guidance on how demonstrations could be most safely conducted. Some commentators found the statement and comments and decisions of local politicians irresistible evidence of hypocrisy or discrimination by secular authorities, arguing that churchgoing was being held to a different standard than other forms of social gathering or expression.

Dr. Shacham has a simple message for people eager to return to church. Do not be confused. The safest course of action continues to be to stay at home unless you have to venture out.

Enbal Shacham acknowledged the apparent contradiction but perceived a more nuanced balancing act of public freedoms against the ongoing threat of the coronavirus pandemic. Dr. Shacham is a professor at the College for Public Health and Social Justice at Saint Louis University and the associate director of the university’s Geospatial Institute.

“Individuals are engaging in their communities in a variety of ways,” she said. “Participating in police brutality protests is one way to recognize the role that racism plays in public health. The privilege of leisure, such as going to bars and restaurants, does not feel to public health officials that it has the same urgency.”

Dr. Shacham shares the concern of many protesters that racism itself can be described as a public health menace because of the structural deficits it contributes to, deficits ironically brought into focus by the coronavirus pandemic. “Covid is a public health disaster,” she said. The pandemic has shown all the “cracks in our society.”

She has a simple message for people eager to return to church as other social interactions appear to be restored. Do not be confused by what you are seeing or hearing as some states allow bars and restaurants to reopen and Black Lives Matter and other demonstrations to continue. The safest course of action, Dr. Shacham emphasized, continues to be to stay at home unless you have to venture out.

The majority of U.S. churchgoers appear ready to follow that guidance. According to a recent survey from the American Enterprise Institute, 64 percent of Americans said they were “somewhat uncomfortable” or “very uncomfortable” attending in-person worship just now. A spokesperson for the U.S. Conference of Catholic Bishops said the U.S.C.C.B. would not be issuing guidelines on reopening parishes, leaving those decisions to “the local bishop who takes the local circumstances of his diocese, balanced with the local government and health guidelines, and acts accordingly.”

The risks of outdoor protests or recreation cannot be compared to the heightened threats of attending Mass indoors, where person-to-person transmission is more efficient.

Though she has been encouraged by the amount of mask-wearing at most demonstrations, Dr. Shacham believes there will surely be new cases of Covid-19 just as she expects other recent notable breaches of social isolation she has observed—like vacationers risking exposure at the Lake of the Ozarks over Memorial Day weekend—will express themselves before long as new Covid-19 cases to track.

“You’re making these decisions based on your health and how [well] you protect yourself from Covid,” she said. “I don’t think leisure is a public health crisis, but maybe there is a need there. There’s hopefully a psychological health and mental health improvement” that might justify the risk.

But Dr. Shacham does not believe the risks of outdoor protests or recreation can be compared to the heightened threats of attending Mass indoors, where person-to-person transmission is more efficient. Churches had already produced some of the pandemic’s most notorious exposure incidents, and new outbreaks this month have already been tracked back to church gatherings in Alabama, Kansas and West Virginia.

U.S. courts have also perceived a risk differential that overrides First Amendment claims during the continuing health crisis. A Las Vegas federal court on June 9 refused to overturn Nevada’s 50-person cap on religious gatherings, and on May 30 the U.S. Supreme Court concluded that state governments were within their rights to regulate head counts at churches during the Covid-19 public health emergency.

Since those rulings, states have continued to ease restrictions, and that has created opportunities for churches to reopen, if at limited capacity and with social distancing practices in place. But by mid-June many states that had hurried to “return to normal” and relax pandemic restrictions were experiencing sharp spikes in new Covid-19 cases—even as states like New York, Connecticut and Massachusetts, which had extended restrictions, continued to see Covid-19 cases and deaths decline.

Will we normalize Covid deaths in the same way we tolerate gun violence?
Michael Rozier, S.J.

With numbers trending the right way, New Jersey eased restrictions on social gatherings this week, and Gov. Phil Murphy said that outdoor demonstrations protected by the First Amendment, including religious services and protests stemming from George Floyd’s death, could be held, regardless of the number of attendees. Even previously hardest-hit New York has moved into the third phase of a four-step reopening process that allows churches to restore services with social distancing protocols and at 33 percent capacity.

Speaking before Congress on June 23, Dr. Anthony Fauci, director of the National Institute of Allergy and Infectious Diseases, issued a plea for Americans to avoid crowds and put on masks before leaving their homes. He told Congress the next few weeks will prove critical to tamping down the resurging coronavirus. On June 24 nearly 37,000 new cases were confirmed nationally—the highest daily toll since the worst days of the beginning of the pandemic in the United States.

Dr. Fauci noted another worrisome trend: a sharp increase in infections among young adults. He testified that Covid-19 tends to be less severe among younger people, but some do become seriously ill and some die. Younger people are also more likely not to exhibit symptoms of coronavirus, unwittingly infecting others.

If people say, “‘I’m young, I’m healthy, who cares?’—you should care, not only for yourself but for the impact you might have” on someone more vulnerable, Dr. Fauci said.

He told lawmakers that he understands the pent-up desire to get back to normal after months of stay-at-home orders and business shutdowns. But he said the nation’s reopening has “to be a gradual step-by-step process and not throwing caution to the wind.”

“Everyone’s losing a piece of their identity in some ways with the things that we find so important in our lives that we haven’t been able to fully engage in,” Dr. Shacham said. But the longer Americans hold off, “the safer we’ll be to fully engage,” she said. “That’s what our hope is in public health.”