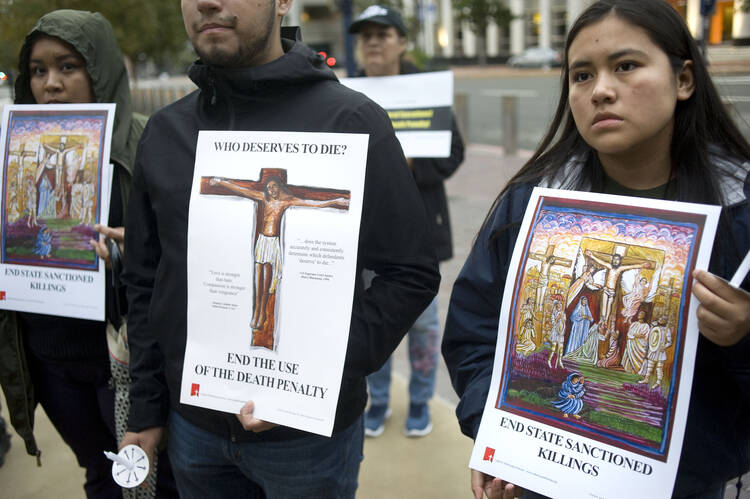 In the spirit of Elijah, Micah, Isaiah, Jeremiah, Jesus and my own Catholic faith, I am compelled to speak out about the present rush by the U.S. Department of Justice to resume federal executions, which have lain dormant for 17 years.

In Terre Haute, Ind., on July 14 at 8 a.m., Daniel Lee died by lethal injection after lying strapped to the death gurney for four hours. He lay there awaiting death as Attorney General William Barr, in the wee hours of the morning, vigorously negotiated with the Supreme Court to override lower courts’ stays of execution to facilitate his death. Following on Daniel Lee’s death, Wesley Purkey was executed early the morning of July 16, and Dustin Honken was executed on July 17. Also slated soon for execution in the federal pipeline is Keith Nelson on August 28.

What is the moral imperative behind the government’s urgency to hasten the death of its citizens?

“Let federal killings resume,” orders the current occupant of the White House, having appointed Mr. Barr to carry out his mandate. Why the rush? I can’t help but wonder. What is the moral imperative behind the government’s urgency to maximize its jurisdictional power to hasten the death of its citizens? Granted they may have the legal power to do so, but why the moral righteousness?

Especially as we witness the dramatic decline of executions across the land and the palpable loss of desire for government killing by the American people. And especially seeing how most citizens now recognize that the government “machinery of death” (to use former Justice Harry A. Blackmun’s famous phrase) is riddled with a staggering number of mistakes, flaws and unconscionable biases, which have resulted in 168 wrongful death sentences thus far—and counting.

Most citizens now recognize that the government “machinery of death” is riddled with a staggering number of mistakes, flaws and unconscionable biases.

Is anyone with even the slightest leaning of support for the death penalty not stunned—shocked, flabbergasted—that, since the resumption of executions in 1977, for every 10 executions carried out in this country, one more wrongfully sentenced person on death row has had to be freed? Would anyone be inclined to book a flight on an airline with that kind of track record?

Noticing the careful prioritized selection for execution of federal inmates, Denny LeBoeuf, an astute criminal defense lawyer, pointed out to me that, in order to make the rush for federal executions more acceptable to the public, the first three condemned for execution are all white males, whose crime was the murder of children, the most egregious of crimes, which causes any decent person to gag with disgust. (Ms. LeBoeuf admits this is a cynical view.) She adds that the government’s rationale seems to be that, following the executions of these most despicable killers, the federal killing track will be well greased to smooth the way to execute inmates whose racially-driven selection to die is apt to raise more morally troublesome questions.

Of the 61 condemned persons on federal death row, almost 60 percent are persons of color.

First, grease the tracks with the “worst of the worst” of the supposed “worst of the worst” (the Supreme Court’s criterion for deciding who should die, which was ill-conceived from the start and proven impossible to apply in a way that respects Constitutional protections), and the rest will be more palatable to the public. So says Denny LeBoeuf, with more than 30 years of anti-death penalty litigation under her belt, and I believe her.

After hearing of her client’s surprising death under cover of night, Daniel Lee’s devastated defense attorney, Ruth Friedman, said: “It is shameful that the government saw fit to carry out this execution when counsel for Danny Lee could not be with him, and when the judges in his case and even the family of his victims urged against it. And it is beyond shameful that the government in the end carried out this execution in haste, in the middle of the night, while the country was sleeping. We hope that upon awakening (emphasis mine), the country will be as outraged as we are.”

That telling phrase, “upon awakening,” is worth noting, even as our nation is now freshly awakening to the systemic racism by local law enforcement in unlawful killings of people of color across the nation. (No surprise: Racism in the selection of citizens for death in the flawed federal system is as bad, if not worse, as state systems. Of the 61 condemned persons on federal death row, almost 60 percent are persons of color.)

I am especially alert to “awakening,” having recently published River of Fire, my spiritual account of gradually awakening to Jesus’ radical call to justice, which led me to death row —and witnessing six executions, which set my soul on fire with the ministry to abolish the death penalty for, lo, these 30 years—and which leads me to raise my voice.

This article has been updated to note the executions of Wesley Purkey on July 16 and Dustin Honken on July 17. Also, Mr. Honken’s name was misspelled as “Honkin” in this article as it was first published, and the phrase “machinery of death” was attributed to former Supreme Court Justice Antonin Scalia, though its first prominent use was by Justice Harry A. Blackmun.

Helen Prejean, C.S.J., is the author of Dead Man Walking, The Death of Innocents and River of Fire.

@helenprejean
Provide feedback on this article
Join the conversation: Login or create an account
Before you can comment, you need to update your profile to include your first and last name, as required in our comments policy. Then reload this page and you'll be set up for commenting. Update your profile