Despite resistance first federal execution in 17 years conducted in Indiana 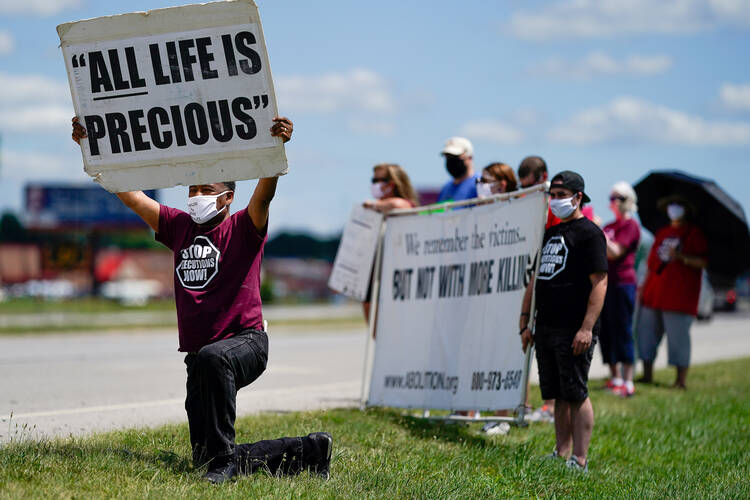 Helen Prejean, a Sister of St. Joseph of Medaille, who is a longtime death penalty opponent, tweeted: “I’m appalled to hear that the federal government executed Daniel Lee early this morning after the U.S. Supreme Court issued a seemingly unprecedented opinion at 2 am. While we were all sleeping, the government killed a man under cloak of darkness.”

“By all measures, this execution was unnecessary and avoidable,” said Krisanne Vaillancourt Murphy, the executive director of Catholic Mobilizing Network, the national Catholic organization working to end the death penalty and promote restorative justice, in a statement released on July 14. “The federal government relentlessly plotted its course to execute Daniel Lee despite a historic decline in public support for the death penalty, clear opposition by the victims’ family, unwavering Catholic opposition to the restart of federal executions, and an unyielding global pandemic which has already taken more than 135,000 American lives.”

“What justice was served here?” asked Ms. Vaillancourt Murphy. “In restarting the practice of state-sanctioned executions, our federal leaders have demonstrated the pro-life values they profess are flimsy, performative, and wholly inconsistent.”

The Catechism of the Catholic Church states that “the dignity of the person is not lost even after the commission of very serious crimes.” It goes on to call the death penalty “inadmissible” in all cases “because it is an attack on the inviolability and dignity of the person.”

Helen Prejean: “While we were all sleeping, the government killed a man under cloak of darkness.”

“On this profoundly sad day, we lament the wrong-headed return of federal executions,” she said. “Despite the horrific action this morning, we know all life is sacred, and every person has dignity.”

Hannah Cox, the national manager of Conservatives Concerned About the Death Penalty, also criticized the resumption of capital punishment by the federal government. “Republicans at the federal level,” she said, “are out of step with the many Republican state legislators across the country who are sponsoring death penalty repeal bills, as well as the hundreds of conservative state-based activists who say capital punishment goes against their principles of fiscal responsibility, limited government and valuing life.”

In a July 14 statement issued by the Justice Department, Attorney General William Barr said: “Today, Lee finally faced the justice he deserved. The American people have made the considered choice to permit capital punishment for the most egregious federal crimes, and justice was done today in implementing the sentence.”

Lee’s attorney, Ruth Friedman, did not agree. She called it “shameful that the government saw fit to carry out this execution when counsel for Danny Lee could not be present with him, and when the judges in his case and even the family of his victims urged against it.”

She also said in a statement that it was “beyond shameful that the government, in the end, carried out this execution in haste, in the middle of the night, while the country was sleeping.”

Lee, 47, convicted of being an accomplice in killing three family members in 1996, was pronounced dead at 8:07 a.m. at the Federal Correctional Institution in Terre Haute, Indiana.

His last words, according to a pool reports were: “I didn’t do it. I’ve made a lot of mistakes in my life, but I’m not a murderer. You’re killing an innocent man.”

Federal executions have been challenged by death-row inmates since the Justice Department announced last year that these executions would resume with the use of one drug in the lethal injection. A challenge of this method continued right up until the last minute, and past it, for Lee, whose scheduled execution on July 13 was blocked by a federal judge’s order.

The Supreme Court's early morning ruling that cleared the way for the federal executions to proceed said a "last-minute intervention" to stop executions "should be the extreme exception, not the norm.”

The Justice Department immediately appealed the ruling by Judge Tanya Chutkan of the U.S. District Court for the District of Columbia, who had issued a preliminary injunction against Lee’s scheduled execution describing the “extreme pain and needless suffering” caused by the government's lethal injection protocol.

But several hours later, the Supreme Court’s unsigned majority opinion said the plaintiffs, Lee and three others in federal prison appealing the manner of their death sentence, had “not established that they are likely to succeed on the merits of their Eighth Amendment claim” in their dispute about the specific drug protocol to be used in the executions.

The Department of Justice first announced its plan to resume federal executions in July 2019, launching a barrage of legal challenges. On July 7, a joint letter signed by more than 1,000 faith leaders was delivered to President Trump and Mr. Barr urging them to halt the planned restart in federal executions. Catholic leaders including Archbishop Paul S. Coakley, Archbishop Charles C. Thompson, and the Catholic Bishops of Iowa also issued statements upholding the church’s anti-death penalty teachings.

Lee’s execution had already been previously halted over pandemic concerns raised by relatives of Lee’s victims who said people who would normally have been present at the execution would not want to risk Covid-19 exposure.

The Supreme Court’s early morning ruling that cleared the way for the federal executions to proceed said a “last-minute intervention” to stop executions “should be the extreme exception, not the norm.”

This Lent, U.S. Catholics are called to reckon with the sin of capital punishment
Krisanne Vaillancourt Murphy

The opinion also said it was the court’s responsibility to ensure that challenges to the method of execution “are resolved fairly and expeditiously” so the death penalty issue can remain “with the people and their representatives, not the courts, to resolve.”

Breyer’s dissent echoed his previous concern about the constitutionality of the death penalty.

Breyer wrote that Lee’s case “illustrates at least some of the problems the death penalty raises in light of the Constitution's prohibition against ‘cruel and unusual punishment,’”noting that Lee spent more than 20 years on death row, which itself can cause “severe psychological suffering.”

He also said the death penalty is “often imposed arbitrarily,” pointing out that Lee’s accomplice received a life sentence for committing the same crime.

Sotomayor wrote that the majority opinion in its acceptance of the government’s “artificial claim of urgency” to stop judicial review in this case sets a “dangerous precedent.”

Two additional federal executions are scheduled for July 15 and 17, with a fourth to follow in the month of August.