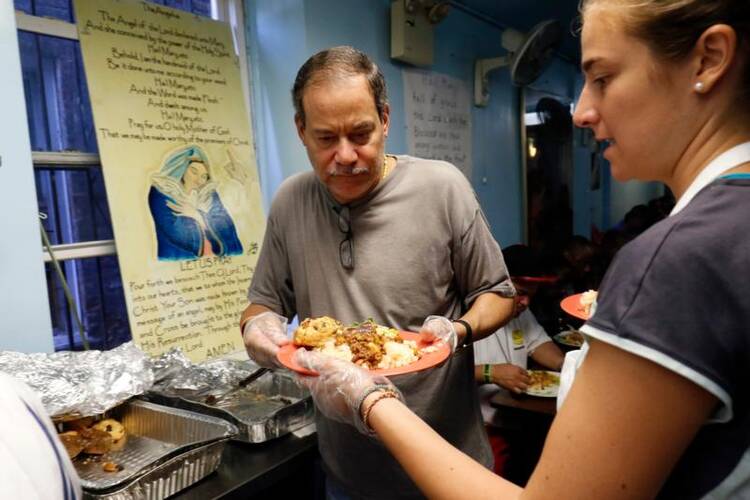 A soup kitchen run by the Missionaries of Charity in an apartment building in the South Bronx section of New York is seen in this 2016 file photo. (CNS photo/Gregory A. Shemitz)

DETROIT (CNS) -- As the coronavirus spreads, many Catholic-run soup kitchens and food pantries are not sure what will come next. But one thing is certain: Their guests need them, and many say they will continue to serve food to those in need for as long as possible.

In the Detroit Archdiocese, although some soup kitchens have had to close down, others such as the Pope Francis Center, St. Leo's Soup Kitchen and St. Christine's Christian Services remain open, but with new sanitation procedures and processes for serving their guests meals.

"Given the new concerns, we are doing carryout meals only, which we normally don't do," said Larmender Davis, executive director of St. Leo's in Detroit. "We are trying our best to make sure that people who depend on us for maybe their only meal of the day are at least able to have one hot meal."

The center's executive director, Jesuit Father Tim McCabe, said the center also has set up sanitation stations and portable toilets, but has had to shut down other services including showers, laundry and rotating free clinics such as dentistry and legal services.

As businesses, nonprofits and families across the state practice social distancing, charities and programs offered to the poor have had to cut back on some services in an effort to keep clients, staff and volunteers safe, he said.

A longer-term, and more pressing concern is that donations could dry up as need rises if economic stability is affected by the length of the quarantine.

"The issue really is that, as the economic downturn happens, we are going to see fewer donations, and we will see a higher number of people experiencing homelessness as people lose their jobs, lose their income and then lose their homes," Father McCabe told the Detroit Catholic, the archdiocesan digital news service. "We are bracing for numbers to go up, and we have to find a way for people to get their basic human needs met."

The priest said the Pope Francis Center already has seen an increase in the number of guests in recent days, especially as families with children have found themselves in need of meals that were once provided at schools.

My year of service sent my parents into a panic. It sent me deeper into the heart of Mercy.
Tinamarie Stolz

Meanwhile, St. Leo's is seeing fewer guests, and Davis is concerned this might be because people are unaware the soup kitchen is still open, just operating differently.

"I am really concerned because some of our guests are homeless, some are living in homes without electricity and water and without the means to go out and purchase food," Davis said. "I am very, very concerned because I know a lot of soup kitchens have already closed down, and we are one of the few that are trying to weather the storm."

Even if some guests are able to acquire food elsewhere, they might not have the means to cook or access to water, Davis said.

But as much as St. Leo's guests need to eat, the soup kitchen also has a responsibility to keep guests, staff and volunteers safe.

"I think this pandemic is just highlighting the needs and our gaps in services and resources," Davis said. "These needs are every day, and you don't really hear about them. We are doing the best we can during this pandemic, but when it's not a pandemic, we still need donations and volunteers and things to keep the soup kitchen running because there is a population out there that still exists that does not have access to healthy, hot meals."

Through all of this, Father McCabe said he is inspired by the resilience of the people who frequent the center, and their optimism despite the gloomy situation.

"The thing that I am overly amazed at with the folks that are homeless is how resilient they are and how willing they are to accept whatever restrictions we put out there," the priest said. "It's cold out in the morning, and they have to just stand out there in the cold and eat their meals, and they are just so accommodating and so grateful."

The situation is similar in the Archdiocese of Baltimore where several Catholic soup kitchens remain in operation but with closed dining rooms and "grab-and-go" arrangements in response to government orders to close bars and restaurants and recommendations to limit the number of people in one space.

Lee Martin, a program director at Our Daily Bread, which serves meals to those in need in several Baltimore locations, spoke to the Catholic Review, Baltimore's archdiocesan news outlet, March 17, a few hours after it had served its last meal, for now, in its dining room. Even before that, service was restricted.

"Normally, we can sit 108 people at a time," Martin said of a service that on a typical day averages 700 meals served. "We limited that to 72 seats, and then 36 (before closing it). We're not sure when the dining room will reopen, but we're going to continue our meal program.

"When we knew the pandemic was going to happen, one of the first decisions the agency made was to do everything in its power to continue the meal program. We've never missed a meal in 39 years," he said.

Prepackaged meals are being distributed from Our Daily Bread, with staff monitoring lines to ensure social distancing.

Beginning March 18, Our Daily Bread was ordering volunteers to stay home. Asked if it still needed food donations, Martin said: "We're still in need of casserole donations. That's a big assistance to us. Any monetary or food donation is going to help us."

At the Franciscan Center in Baltimore, executive director Jeffrey Griffin and his staff have taken similar measures. The agency, founded by the Franciscan sisters, has set up a similar grab-and-go meal operation, maintained its mail drop for more than 400 people and added three portable toilets, among other adjustments.

"We do a lot under one roof," Griffin said on Facebook Live March 17. "We have a calling to be there for our neighbors in need throughout this crisis situation."

Gabriella Patti - Catholic News Service
Provide feedback on this article
Join the conversation: Login or create an account
Before you can comment, you need to update your profile to include your first and last name, as required in our comments policy. Then reload this page and you'll be set up for commenting. Update your profile
Show Comments ()
Comments are automatically closed two weeks after an article's initial publication. See our comments policy for more.