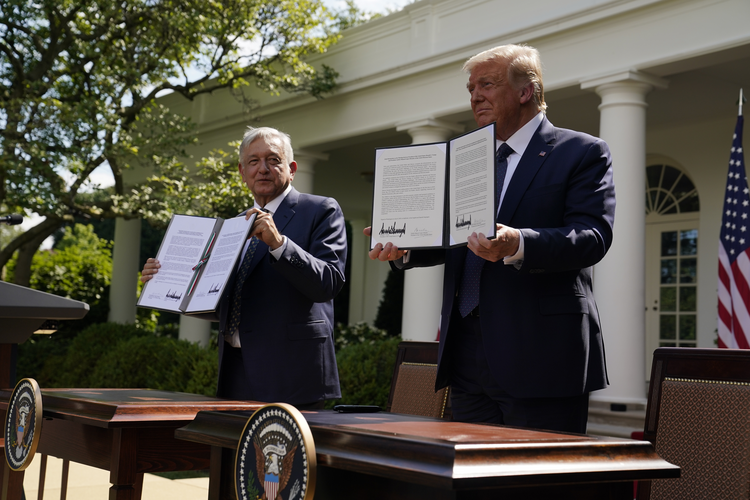 President Trump and Mexico’s President Andrés Manuel López Obrador met Wednesday, July 8, to celebrate the new United States-Mexico-Canada Agreement, which the countries enacted on July 1. The two leaders also signed a joint declaration, calling the new trade agreement “the ideal instrument to provide economic certainty and increased confidence to our countries, which will be critical to the recovery that has begun in both of our nations” amid the Covid-19 pandemic.

“Our countries are linked by trade and travel, by history and culture, by faith and family,” Mr. Trump said in his remarks. “The United States is home to 36 million incredible Mexican-American citizens. Mexican-Americans uplift our communities, and they strengthen our churches and enrich every feature of national life. They are hardworking, incredible people.”

Mr. Trump’s remarks struck a decidedly different tone than those he made in June 2015, when he announced his presidential candidacy. “When Mexico sends its people, they’re not sending their best,” he said then. “They’re sending people that have lots of problems, and they’re bringing those problems with us. They’re bringing drugs. They’re bringing crime. They’re rapists. And some, I assume, are good people.”

Mr. Trump seemed to acknowledge the problematic beginning of his relationship with Mr. López Obrador when he said their friendship developed “against all odds.”

President Trump seemed to acknowledge the problematic beginning of his relationship with President López Obrador when he said their friendship developed “against all odds.”

Mr. López Obrador, who flew coach on this, his first international trip, has met with criticism both in the United States and in Mexico for taking the meeting. In his 2017 book, Oye, Trump, Mr. López Obrador wrote, “Trump and his advisers speak of the Mexicans the way Hitler and the Nazis referred to the Jews, just before undertaking the infamous persecution and the abominable extermination.”

Judging from his public statements yesterday, the Mexican president seems to have shifted his stance toward Mr. Trump. “You have not tried to treat us as a colony,” he said. “That’s why I’m here to express to the people of the United States that their president has behaved with us with kindness and respect. You have treated us just as what we are: a country and a dignified people; a free, democratic and sovereign people.”

The two leaders did not publicly mention asylum seekers or the Migration Protection Protocols, better known as the “Remain in Mexico” policy, which empowers immigration officials to return asylum seekers to Mexico while their cases are decided by the U.S. immigration court system.

“Asylum and protection of the vulnerable should be a focus of such a meeting between the two leaders, and, sadly, it sounds like it wasn’t,” said Ashley Feasley, the director of policy at the Office of Migration Policy and Public Affairs at the U.S. Conference of Catholic Bishops. “Asylum seekers are people, and we as the church must never look away from the human suffering they are enduring.”

Citing concerns over the spread of Covid-19, Mr. Trump issued a proclamation in April suspending the entrance of immigrants and asylum seekers for 60 days, granting few exceptions. On June 22, he extended the suspension of entry through the end of the year.

“It’s vital to remember that many of these asylum-seeking families that are waiting in danger in Mexico could be easily tested and screened for public health issues and then paroled into the U.S. and reunited with families,” Ms. Feasley said. “They could be enrolled in alternatives to detention with case management and could be allowed to comply with their immigration proceedings in a more dignified and humane way.”

U.S.C.C.B.’s Ashley Feasley: “Asylum and protection of the vulnerable should be a focus of such a meeting between the two leaders, and, sadly, it sounds like it wasn’t.”

The situation has grown more dire for asylum seekers on the U.S.-Mexico border, according to Giulia McPherson, the director of advocacy for Jesuit Refugee Service. “We’ve become very disheartened with this administration’s approach to asylum,” she told America, adding that she hoped Mr. Trump and Mr. López Obrador would work together to revisit existing immigration policies. In May, J.R.S. released a comprehensive report on the topic, “Stranded: The Impact of U.S. Policies on Asylum Seekers.”

Ms. McPherson shared the story of a Honduran woman who was sent back to Mexico because of the Remain in Mexico policy. She had been kidnapped in Mexico on her way to the U.S. border. She gave up her asylum claim because she feared she might be kidnapped again.

J.R.S. provides legal and psychological support to migrants in Tapachula, a Mexican city just north of the border with Guatemala. Ms. McPherson said many migrants and asylum seekers from Central America are no longer attempting to travel north to the United States. Mexico has also stepped up enforcement on its southern border.

“At the end of the day, the U.S. goal [of discouraging immigration] was working,” she said. “We believe the U.S. government needs to put into place access to asylum on our border and put safety measures in place to deal with Covid-19. Other countries are doing so. We believe you can do both: asylum and safety.”

Ms. McPherson noted that there are exemptions in place for those coming into the United States, including for permanent residents, U.S. citizens and trade. “We believe that asylum seekers should be included among the exemptions,” she said.

Even before the pandemic, Mexico had begun efforts to stem migration, according to Patricia Hernández López, the director of J.R.S. programs in Mexico. “They began implementing strong measures due to pressures being placed on them by the United States government,” she said. “They have dramatically militarized their southern border.”

Those who do make it into Mexico are seeking asylum there more often, Ms. Hernández López said. “Making the journey through Mexico was hard enough before. Now with Covid, it’s even more complicated,” she said.

With fewer migrants, Tapachula’s economy has suffered, Ms. Hernández López said, noting an escalation of unemployment. It was hard for migrants to get a job in Mexico before the pandemic, and now it has become even more difficult, she said.

But, despite increased enforcement, the circumstances in Central America have not changed, Ms. Hernández López said. Asylum seekers are fleeing a legitimate fear of violence in their home countries and can prove it, she said.

“They want to live in safety in their home countries,” she said. “They’d prefer to stay there, where they have their homes and their families. But because of violence, largely due to gangs, it simply isn’t a decision they can make. They feel forced to come to Mexico or to the United States so that they can feel safe.”

The Asylum Cooperative Agreements the United States has signed with Guatemala, Honduras and El Salvador enable asylum seekers to be returned to dangerous circumstances in these Northern Triangle countries. According to the agreements, asylum seekers are supposed to begin their appeals in one of these Central American states rather than in the United States. But these countries, beset by gang and political violence, are far from safe.

A final party to the trade agreement, Justin Trudeau, Canada’s prime minister, did not make the trip to Washington.