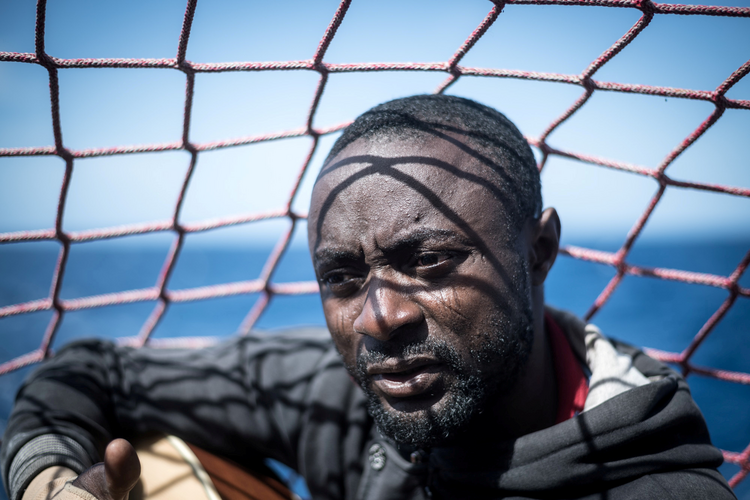 A migrant is seen in a file photo holding his guitar aboard the Sea Watch 3 German charity ship off the coast of Lampedusa, Italy. (CNS photo/Nick Jaussi, Sea-Watch via Reuters)

On July 8, 2013, Francis made his first journey outside the Vatican as pope to visit the remote island of Lampedusa, near Sicily, to draw attention to the plight of migrants and refugees. There he threw a wreath of flowers into the sea in their memory and wept for the thousands who had died on the Mediterranean during perilous sea-crossings as they sought refuge in Europe. Then, in a powerful homily at Mass on the Lampedusa sports ground, he denounced “the globalization of indifference” in the face of the worst humanitarian crisis since World War II.

Today, exactly seven years later, Francis recalled that visit as he celebrated Mass in the chapel of the Santa Marta guesthouse where he lives in the Vatican. During his homily, Pope Francis reminded believers that “the encounter with the other is also an encounter with Christ. He himself told us. It is he who knocks on our door, hungry, thirsty, naked, sick, imprisoned, seeking an encounter with us and requesting our assistance. And if we still had any doubt, here are his unequivocal words: ‘I say to you, whatever you did for one of these least brothers of mine, you did for me’” (Mt 25:40).

Commenting on the words of Jesus, “whatever you did,” meaning “for better or for worse,” Francis said they are “a warning” to us today, and he suggested that we should use them “to examine our conscience on a daily basis.”

In this context, he drew attention to the dramatic situation in Libya today, “the detention camps, the abuses and violence that migrants are victims of, journeys of hope, rescue operations and push-backs. ‘Whatever you did, you did it for me.’”

Pope Francis drew attention to the dramatic situation of refugees in Libya today, “the detention camps, the abuses and violence that migrants are victims of, journeys of hope, rescue operations and push-backs.”

The pope used the anniversary to continue to shine the spotlight on the still dramatic plight of migrants and refugees from North Africa, the Middle East and other parts of the world, which has been made worse by the Covid-19 pandemic. The United Nations International Organization for Migration reports that between 2014 and 2019 at least 33,361 migrants and refugees have drowned in the Mediterranean Sea as they sought refuge and a new life in Europe. The pope is aware that in other continents, too, vast numbers of migrants and refugees suffer greatly as they flee from war, violence, poverty and climate change in search of a new life elsewhere but often only meet hostility in their attempts to find refuge.

Departing from his prepared text, Francis remembered how some of the refugees and migrants that he met in Lampedusa “recounted for me their own stories and how much they had suffered to arrive there.”

He recalled that “one of them told me of terrible things in his own language, he spoke and spoke at length, but the interpreter gave a short translation.” But when he got back to the Vatican, a woman in the reception who spoke Ethiopian and had followed the events in Lampedusa, who has since passed away, told him, “That Ethiopian interpreter didn’t tell you even a quarter of the tortures and suffering that the person had experienced.”

Francis commented, “They gave me a ‘distilled’ version then. The same happens today with Libya: They give us a ‘distilled’ version. War is bad. We know this, but you cannot imagine the hell that they live there.... And these people came [to Libya] only with the hope of crossing the sea.”

He invited members of the Vatican office for refugees and migrants, which he established in 2016 and which answers directly to him, to participate in this Mass, including the two undersecretaries of that section, Cardinal Michael Czerny and the Italian Scalabrini missionary priest, Fabio Baggio. All of them wore masks and respected the social-distancing norms of this period of pandemic at this simple Mass that included some singing.

He began his homily by reminding the roughly 20 persons present and his global audience who were following the Mass on television and online that “the ultimate goal of our existence is the encounter with God.” Indeed, he said, “to seek the face of God is an assurance that our journey in this world will end well. It is an exodus toward the Promised Land, our heavenly home. Our destination, our North Star helping us not to lose the way, is the face of God.”

Drawing on the first reading at Mass in which the prophet Hosea described how the people of Israel “were lost” because “they had lost sight of the Promised Land and were wandering in the desert of iniquity,” Francis remarked: “They had drifted away from the Lord because of abundance, prosperity and riches. These had filled their heart with falsehood and injustice.”

Today, too, he said, “we modern Christians are not immune” from this same sin. He quoted the words he had spoken seven years ago in Lampedusa to explain how we commit this sin: “The culture of comfort, which makes us think only of ourselves, makes us insensitive to the cries of other people, makes us live in soap bubbles, which, however lovely, are insubstantial; they offer a fleeting and empty illusion that results in indifference to others; indeed, it even leads to the globalization of indifference. In this globalized world, we have fallen into globalized indifference. We have become used to the suffering of others: It doesn’t affect me; it doesn’t concern me; it’s none of my business.”

He said the words of the prophet Hosea are for us “a call to conversion, to turn our eyes to the Lord and seek his face” and added that “to seek the face of God is motivated by the desire for a personal encounter with the Lord, with his immense love and redeeming power.”

He recalled how, as today’s Gospel tells us, the 12 apostles “received the grace to meet the Lord physically in Jesus Christ, the incarnated Son of God,” and how that personal encounter led to a mission to proclaim the Good News.

Pope Francis said, “Such a personal encounter with Jesus Christ is possible also for us, disciples of the third millennium” because “as we undertake to seek the face of the Lord, we may recognize him in the face of the poor, the sick, the abandoned and the foreigners whom God places on our way.” And this encounter “becomes for us a time of grace and salvation, as it bestows on us the same mission entrusted to the apostles.”

Pope Francis concluded by invoking the help of the Virgin Mary, “the solace or comfort of migrants”—the new title he has given her—“to help us discover the face of her Son in all our brothers and sisters who are forced to flee from their homeland because of the many injustices that still afflict our world today.”

Correction July 9, 2020: Father Baggio’s name was misspelled in an earlier version of this report.