How should the church respond when gay employees get married? 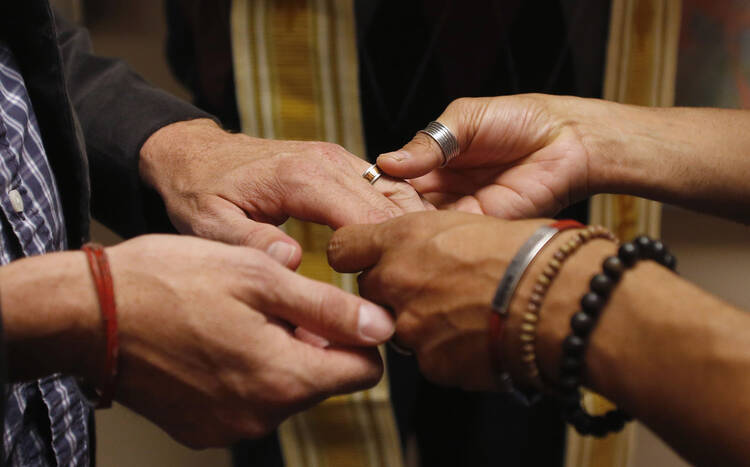 In May 2015, one month before the U.S. Supreme Court ruled in favor of civil marriage for same-sex couples, a series of unexpected events unfolded in Germany. By a two-thirds vote, the German Catholic bishops’ conference voted to change church labor law so that employees of Catholic institutions who divorce and remarry or who enter same-sex unions will not be subject to dismissal.

Civil unions for same-sex couples have been legal in Germany since 2001. What sparked last year's policy change? The bishops recognized that the previous church law, which included a “morals clause” for Catholic employees, was being selectively applied.

“People who divorce and remarry are rarely fired,” Cardinal Rainer Woelki, archbishop of Cologne, said at the time, citing another common violation of the morals clause. “The point is to limit the consequences of remarriage or a same-sex union to the most serious cases [that would] compromise the church's integrity and credibility.”

Under the new law, the church in Germany can dismiss an employee who publicly expresses “opposition to fundamental principles of the Catholic Church—for example by support for abortion or for racial hatred” or who disparages “Catholic faith content, rites or practices,” on the grounds that these infractions would constitute a “grave breach of loyalty.”

Here in the United States, same-sex marriage has been legal for over a year. Many same-sex couples have chosen to enter into a legal marriage, a number that will surely grow larger with time. At some Catholic colleges and universities, employees who enter into these marriages have been able to keep their jobs. On the parish level, however, many married gay employees have been dismissed, an action often met with sadness or anger from parishioners. In some particularly unfortunate cases, individuals have been secretly reported to their supervisors by other members of the community.

The Catechism of the Catholic Church, while teaching that homosexual acts cannot be morally accepted, also requires that homosexual persons be “accepted with respect, compassion, and sensitivity. Every sign of unjust discrimination in their regard should be avoided” (No. 2358). The high public profile of these firings, when combined with a lack of due process and the absence of any comparable  policing of marital status for heterosexual employees, constitute signs of “unjust discrimination,” and the church in the United States should do more to avoid them. In addition to any possible harm done to the employees who have been fired, the appearance of unjust discrimination weakens the church’s overall witness. The church will lose talented, devoted workers because of institutional decisions made under pressure or without sufficient discernment.

The church in the United States is living in a complex and challenging time. Regrettably, on a variety of subjects—from views on the death penalty to support for contraception and same-sex marriage—the teachings of the church and the practices of its members often do not match. Meanwhile, the church relies on a large number of lay employees to help administer parishes, schools and hospitals across the country. Very few of them subscribe to the totality of Catholic teaching. How can the church continue to sustain its ministries while bearing witness to the timeless truths of its teaching when its own employees do not accept them all?

The answer is not to downplay or gloss over these teachings. Catholics are called to preach difficult truths about a range of subjects, including but not limited to marriage and sexuality. But what is the best way to do that? It is true that sometimes an employee of a Catholic institution can cause scandal by his or her public words or deeds. But it is also true that treating employees unfairly, by holding them to different standards or dismissing them abruptly or without consultation, can itself cause scandal.

In a recent interview with America, Cardinal-designate Joseph Tobin offered some sound advice. First, it is wise to approach these cases one by one. Different standards may apply to a chief financial officer of a Catholic organization  than to a grade school teacher. It would be unwise to implement a one-size-fits-all policy for the entire U.S. church. Church leaders should rather circulate guidelines that can help people at the local level to navigate these difficult questions.

Formation is also critical. What does the training of employees look like at Catholic organizations? Do conversations about ethics and morals continue after a person is hired, or are they invoked only when there has been a violation? Do morals clauses account for a range of Catholic teaching, or do they give too much attention to an important but narrow range of issues related to sexual morality?

The church must be free to conduct its ministries without government interference and with room to challenge prevailing social mores. But we also have a duty to proceed with wisdom and mercy, attentive to the dignity of the individual and the common good.

This editorial is also available in Spanish.

Luis & Tim — this whole thread is not on-topic, since it began by using the question of discrimination as a jumping off point to something entirely different than the focus of the editorial. Also, these comments are starting to get longer than our comments policy allows for. If you want to continue this discussion, please take it into private conversation or onto your own social media pages, but it shouldn't go any further on this page. Thank you.

Ken Collins
5 years 10 months ago
The Catholic Church has a lot of experience with sexual immorality, but not the type that confers expertise. In any event, the rules of the church do not apply to non members: 1 Corinthians 5:12. The Catholic Church is way out of line. It should concentrate in loving their neighbors as themselves and stop the underpants inspections.
William Rydberg
5 years 10 months ago
Mr Collins, You wrote off one billion Christian souls...and it's not even...noon, your time. God forgive you. in Christ Jesus, the Lord...
THE CHRISTOFFERSONS
5 years 9 months ago
The editors have spoken with the kind of wisdom and discernment that bishops and pastors would be similarly wise to emulate. The value of focusing on "unjust discrimination" is that it brings the particular situation to light within a context which draws upon the judgment of the heart, where the Spirit resides. It is not that the law is not useful in its place, but its place is within a hierarchy of truths with love of God and neighbor at the top. The Church is in transition, trying to grapple with what in the end amount to conflicts between love of God and neighbor and subordinate laws. Jesus preached a reign of God where the human heart submits to the Spirit. It is not simply "unjust discrimination" that scandal from violation of the principle of indissolubility does not lead to dismissal whereas scandal from violation of the principle that marriage is between a man and a woman does lead to dismissal. In both these "scandals" there is an underlying scandal that has been difficult to negotiate. Francis has approached this difficulty by a pastoral approach, and Cardinal Tobin is following that lead by suggesting that these cases be handled one by one. The underlying difficulty is that, in particular circumstances, these principles are in violation of love of God and neighbor but the conflict can be swept under the rug by a focus on law. Perhaps greater clarity will emerge as the pastoral approach builds a track record of justice that resonates in the hearts of the people.