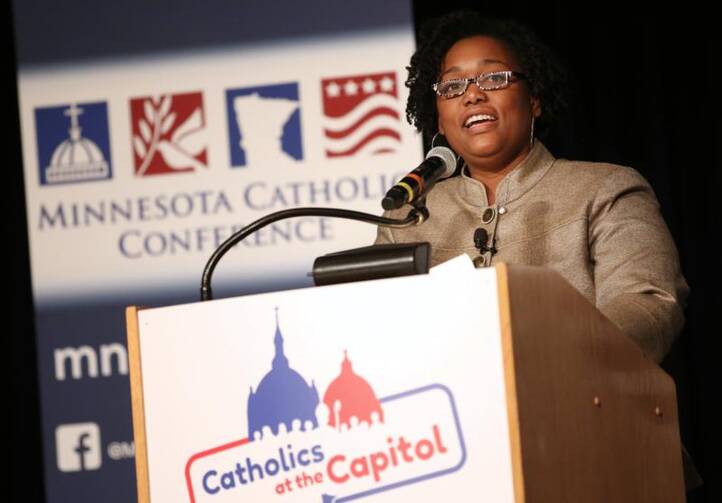 Gloria Purvis, a co-host of "Morning Glory" on EWTN Radio, is seen in this 2017 file photo. (CNS photo/Dave Hrbacek, The Catholic Spirit)

One day in early June, John Thordarson released a short video he had finally finished. Under a black and white filter, the aspiring filmmaker from Boston walks on screen and takes a long pause before he begins.

"This video took me a really long time to make," he says. "With everything that's been going on. ... I feel like it's important to say something, but I wasn't quite sure what that something was."

"That something" Thordarson was seeking to express was in response to the death of George Floyd, an African American man, who died May 25 after being pinned down for nearly nine minutes by a Minneapolis police officer.

Floyd's death, captured in a video posted on social media, sent shock waves across the country and the world, as thousands of protesters took to the streets to express their outrage. The protests, sometimes turning violent, exposed long-simmering issues of racial unrest, from economic inequalities to institutional injustices to prejudice within communities, including, at times, the Catholic Church.

After half a dozen attempts at writing a script, "I realize that what’s really important right now is that we have conversations," Thordarson said in an interview with Angelus, the online news outlet of the Archdiocese of Los Angeles.

To start that conversation, he decided to share the story of his parents, an African American woman and an Irish American man who fell in love and married in a time of segregation.

"It just felt right," he explained about his decision to tell this story. "It dealt with things that are happening ... (but) the nice thing about stories is that if people can relate to a story, it doesn't pass judgment on them."

Told through photographs and Thordarson's narration, the film does not address the events surrounding Floyd's death directly. Rather, it highlights a relationship in which love triumphed over an environment steeped in prejudice.

"The whole reason that (my parents) got married is because they didn't look at each other as what they were supposed to be," Thordarson said. "They just looked at each other as people.
"
For Paul Thordarson, his father, that moment of encounter is especially important for Catholics, who are called to spread hope and joy.

"(The faith) is not a bunch of negatives," he told Angelus, "but rather living the Christian life ... a life of love."

Amid the turbulence since Floyd's death, such words point to a message of healing that the Catholic Church can offer its faithful -- and the rest of the world. But in the age of social media and so-called "cancel culture," what real-life problems is that message supposed to address, and what kind of action does it lead to?

Gloria Purvis was barely able to get through watching the video of Floyd's arrest.

"It's trauma," she told Angelus. "And I wish almost I hadn't seen it."

As a Catholic, pro-life activist and Black woman, Purvis, a host for EWTN's "Morning Glory," felt the tragedy cut her to the core. In a June 5 panel organized by Georgetown University, she likened the experience of watching the video to "watching an abortion."

Since then, Purvis has faced another source of pain: the sense of disconnection from many of her fellow Catholics.

"It's been bewildering," she said, "from the shock ... (and) the feeling of betrayal when you see prominent white Catholics who claim to be pro-life saying and doing everything to deflect away from dealing with the issue of police brutality and racism as it affects the Black community."

She's not alone in feeling this way. "I'm hearing from so many Catholics of color," she added. "Black, Mexican ... my Latino brothers and sisters ... I'm hearing from the Pan-African diaspora of Catholics that they feel betrayed."

Purvis has been on the receiving end of a backlash on social media since she began speaking out more strongly on racism in the wake of Floyd's death. Amid this reaction came a decision by the Guadalupe Radio Network to temporarily suspend airing Purvis' show from its lineup.

In a statement, officials of the network, which is EWTN's largest radio affiliate in the United States, said they are "not bothered in the least that "Morning Glory" took on the difficult, but needed, topic of the evil of racism. In fact, we feel our audience is looking for a clear Catholic response to all they are seeing in our society right now."

But in recent weeks, "we have heard a 'spirit of contention' growing among the hosts live on-air," the statement said. "Yes, it is a difficult subject and can become a spirited one for sure." The show was becoming "more and more awkward and uncomfortable to listen to," and network officials hope EWTN will address what they see as "a real disconnect" among members of the "Morning Glory" team, so they can once again proudly air this program across the GRN."

For Purvis' part, she said: "I will continue to speak the truth about the human person and that includes racism and other evils." Michelle Johnson, director of communications for EWTN, told Our Sunday Visitor news weekly that the Alabama-based Catholic media company, meanwhile, "has made no changes" regarding Purvis or her role on the "Morning Glory" show.

One source of division could be politics. Purvis suspects that some of her fellow pro-life Catholics are concerned about securing votes in the November elections and therefore emphasizing the abortion crisis at the expense of much-needed dialogue on the ugly reality of racism.

Louis Brown, executive director of the health care nonprofit Christ Medicus, thinks the two issues are not mutually exclusive. Brown, a Michigan lawyer who has previously worked as a staffer and adviser to various congressmen, described the pressure to support either the anti-abortion or anti-racism causes as a "false choice."

"Both abortion and racism are part of the culture of death," he told Angelus. "The right to life beginning with the unborn is the preeminent social issue of our time because of its gravity. But fighting against racism is an outgrowth of fighting to advance the right to life."

Brown's words echo those found in the Catechism of the Catholic Church's condemnation of racism as one of the forms of discrimination that "must be curbed and eradicated as incompatible with God's design."

Some have pointed out that Catholics have not always practiced what the church preaches on racism. Cases like that of Georgetown University, whose Jesuit priest leader traded slaves to keep the Catholic school afloat, mark a legacy of ties to that very evil the church has sought to fight throughout the centuries.
It's also no secret that racism has been an unfortunate reality in Catholic seminaries in the U.S.

While a student at Conception Seminary College in the 1960s, now-Supreme Court Justice Clarence Thomas recalled the racial prejudice that buffeted him on a regular basis, including the biting comment from a white seminarian after the Rev. Martin Luther King Jr. had been shot: "Good -- I hope the SOB dies." Such racial hatred drove Thomas from the seminary and, for a period, from Catholicism entirely.

Father Matthew Hawkins spent 20 years working in community economic development and teaching at several schools, including the University of Pittsburgh. On June 27, he was ordained a priest for the Diocese of Pittsburgh at age 63, the culmination of a journey that began when he left behind his Protestantism and became a Catholic in his youth.

Still, the first remedy that comes to the former social worker's mind for healing racism may come as a surprise.

"I think as Catholics, we're required to approach these kinds of controversies with wisdom," he told Angelus, "which means that what should inspire our action is really to enter into a life of prayer -- and the type of prayer that increases empathy."

In the face of tragedy, Father Hawkins believes prayer is crucial because it helps us feel accompanied in suffering. He personally encourages his parishioners to pray the sorrowful mysteries of the rosary and the Stations of the Cross.

By doing so, "You're entering into the passion of Christ and identifying with the suffering of all humanity, which creates a sense of solidarity in human suffering."
- - -

Sophia Martinson, Catholic News Service
@openpublish
Provide feedback on this article
Join the conversation: Login or create an account
Before you can comment, you need to update your profile to include your first and last name, as required in our comments policy. Then reload this page and you'll be set up for commenting. Update your profile