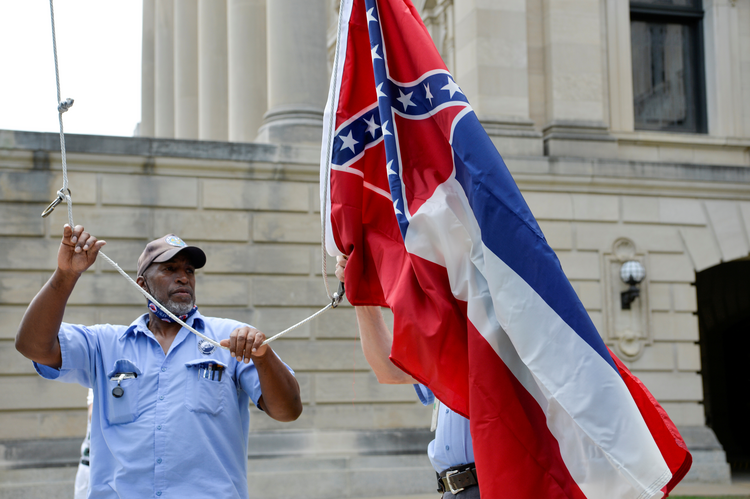 An employee at the Mississippi Capitol raises and lowers a commemorative state flag June 30, 2020, a flag that is purchased by people from all around the world. Hours later, Mississippi Gov. Tate Reeves signed a bill into law to replace the current state flag, which includes the Confederate emblem. (CNS photo/Suzi Altman, Reuters)

WASHINGTON (CNS) -- While America grapples with racism and bigotry and other social ills, Washington Archbishop Wilton D. Gregory said people must reach out to one another, learn about others different from themselves and rediscover that all religions teach that hatred is wrong.

"Ignorance of the other is the soil in which hatred and bigotry grow," he said. "If we do not know each other, share our fears and share our hopes, we make it possible for hatred to grow."

Archbishop Gregory's remarks came during a June 30 online discussion sponsored by the American Jewish Committee on the role faith can play in overcoming racial injustice. The talk was viewed by several hundred people via Zoom.

During the discussion, titled "Race in America: The Faith Perspective," Archbishop Gregory and Rabbi Noam Marans, director of the AJC's interreligious and intergroup relations, addressed racism, anti-Semitism and other problems facing America today.

Rabbi Marans noted the discussion was held "in the fourth month of quarantine time," which he described as an unprecedented period in which nearly 130,000 Americans had died from the illness caused by the novel coronavirus.

In addition, he said, the pandemic has widened economic insecurity and caused vast unemployment, and the country has experienced protests by Americans against racial injustice and the policing that led to the death of George Floyd and many other unarmed African Americans.

"At this time my heart is full of sorrow at the suffering of people in light of the pandemic, in light of the economic uncertainty caused by the pandemic and the unjust death of many people, but my heart is full of hope," Archbishop Gregory said. "I have a certain hope that maybe we have reached a plateau where we can address together some of the things that have reached a flash point, some of the events that have caused national anxiety and angst."

Archbishop Gregory said today's protests against racism differ from earlier struggles because American businesses and the sports community are responding. "The American media is covering this at a level I do not recall from before," he said.

"When we as a nation start to talk about these heavyweight realities that so influence our nation, it bespeaks a different moment, I hope, I pray," he said.

The protests and demonstrations across the country also differ from those of the civil rights era of the mid-20th century, Archbishop Gregory said, because "this moment offers us the possibility of changing hearts."

In changing hearts and turning away from hatred, racism and bigotry, he added, "we have to ask ourselves, 'What part in this do I play? Is there in me a need for conversion ... a commitment for me to do better?'"

In addition to the racism that "still rocks our country," Archbishop Gregory noted that "there is not only hatred against the African American community, but the Jewish community." Pointing to several shootings at synagogues, the archbishop said that rejection of all forms of hatred "hopefully has touched and is touching the hearts of people across the country and across the world."

The Holy Spirit is moving us to act against racism.
James Martin, S.J.

How can I explain the color of my skin—and racism—to young white students?
Alvan I. Amadi

The archbishop said today marks a time for all faiths to teach their young members that all religions call for respecting the lives of others.

"Whether we are Jewish or Catholic, there is a huge mountain we have to climb to make sure our young people know their religious heritage," he said. "But I think this moment is a hopeful time because we see so many of our young adults engaging in the protest of hatred and racism.

Rabbi Marans said that while "people of goodwill are coming together, people are worried that after this first flash of marching and coalition we cannot stay the course of change." He asked Archbishop Gregory what an effective "plan of action" would involve.

The archbishop responding by pointing to the U.S. Conference of Catholic Bishops' pastoral letter against racism of 2018, titled "Open Wide Your Hearts: The Enduring Call to Love." In it, the bishops said racism is "an attack on human life. ... We will not cease to speak forcefully against and work toward ending racism. Racism directly places brother and sister against each other, violating the dignity inherent in each person."

Rabbi Marans asked Archbishop Gregory what the proper role of religion in politics should be.

While stressing that the First Amendment guarantees the separation of church and state and ensures there is no established state religion, the archbishop said faith can "provide a moral voice based on the highest principles of our religious beliefs that challenges and encourages ... and will help our nation wind its way through the labyrinth of social challenges that we face," Archbishop Gregory said.

He also cautioned that religious institutions not be "co-opted and lose their platform of spiritual prophecy."

Archbishop Gregory said in addition to that document, relations were also improved by St. John Paul II, who lived through World War II and the Holocaust in Europe.

He said Pope Francis has continued that tradition, and "when he was archbishop of Buenos Aires, he developed a wonderful relationship with the Jewish community of Argentina."

Despite advances, Archbishop Gregory added, "we have to continue to be reminded to set aside anything that has any vestige of anti-Semitism. We still have work to do. We are not standing on the winner's platform yet, but we can see it from here."

Provide feedback on this article
Join the conversation: Login or create an account
Before you can comment, you need to update your profile to include your first and last name, as required in our comments policy. Then reload this page and you'll be set up for commenting. Update your profile
More: Racism / Race / Racial Justice / Ecumenism