Asylum at the border is ‘effectively over,’ El Paso bishop says

Asylum at the border is ‘effectively over,’ El Paso bishop says 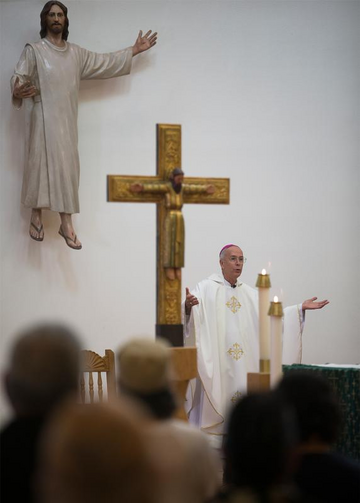 WASHINGTON (CNS) -- After visiting a group of pregnant migrant women on the Mexico side of the border, Bishop Mark J. Seitz of El Paso, Texas, issued strong words June 25 about the Trump administration's "Remain in Mexico" program and other restrictive immigration measures, saying that turning away those seeking asylum in the U.S. amounts to sending them to their death.

"During World War II, the United States thought it had learned after we felt the guilt of having returned a boat filled with Jewish refugees back to the extermination camps of Nazi Germany," he said referencing the ocean liner MS St. Louis, a ship with more than 900 Jewish people forced to return to persecution in Europe in 1939.

"But today, we send those who have escaped back into the hands of narco-trafficking gangs, ignoring the very laws we had written," the bishop said.

Today, he said, the U.S. has essentially put an end to asylum under the Migrant Protection Protocols, or "Remain in Mexico" policy, which forces asylum-seekers to stay on the Mexico side of the border until their cases are adjudicated in immigration court. Add to that, Bishop Seitz said, the fact the Trump administration has used Title 42 of the U.S. Code governing the "Public Health and Welfare" to instruct Border Patrol agents to expel anyone caught trying to enter the U.S. instead of processing them under existing immigration law.

Bishop Seitz's comments came in a statement released by the Hope Border Institute in El Paso.

"Respect for the truth demands that I speak up to say that this fundamental right to asylum here at the border really is effectively over," he said.

He accused the government of using the coronavirus as a cover "to turn the screw even more tightly on migrants at the border" and "to justify the near total suspension of due process."

Border Patrol agents and Customs and Border Protection officers daily "forcibly return migrants, brutally stripped of the protections of the law, including women and children, to this, now the second most dangerous city in the world," he said, speaking in Ciudad Juarez, Mexico, his neighboring border city, where he traveled to inaugurate a project supported by the diocese's Border Refugee Assistance Fund.

The project will help pregnant migrant women in Juarez, including some who met with the bishop.

"I came from a country where the moral fabric is literally fraying, exposed and naked before the Lord," he said. "And the racism which we are again forced to confront in the United States is not disconnected from the reality here. Racism enables us to look away from the mass of Black and brown people huddled at our gates in this city, kept at arm's length, denied due process, denied equal protection and denied a gaze or glance of love."

As the attention of the public in the U.S., and the media, has turned away from the border, there's a certain erosion of rights taking place there, he said.

"And even though many of us cannot see it, we may be living, right now, in the exact moment, when the American commitment to asylum-seekers and refugees has eroded away. Eroded is too deceptive a word. It obscures agency and responsibility. And we are all responsible," he said. "A future generation may look back and hang its head in shame that in this moment we did not act."

In the year since the "Remain in Mexico" policy was implemented, the organization Human Rights First said there have been more than 1,000 reported cases of rape, murder, kidnapping and torture of migrants who were not allowed to enter the U.S. to seek asylum, even as the government "has denied that it places migrants in danger," he said.

"Yesterday, asylum-seekers could be safely paroled into our El Paso community," Bishop Seitz said in the statement. "Today, those who are able to get over the 'demilitarized zone' that our border has become, go from being trapped in Ciudad Juarez to being trapped in detention centers which have become petri dishes for COVID-19."

The bishop said currently there is "a major and dangerous outbreak of COVID-19 in the detention centers in El Paso as well as throughout the country."

This is "unseen," he continued. "Unheeded. Who will pay attention? The threat here is not from the refugees themselves but from our insistence as a government that those who have fled here from places where there is a lower incidence of the virus and who are not accused of a violent crime must be detained in unsafe conditions."

Then those infected are forced to return, leading to more infections in their home countries because of "irresponsible and reckless deportations," Bishop Seitz said.

"Yesterday, we valued the life of babies, toddlers and youth. Today, we run roughshod over the law and forcibly return unaccompanied children, putting them at risk of exploitation, trafficking and coronavirus," he said. "I’m filled with fear and horror that with hardly a qualm of conscience we are returning these children back to the very threats from which they’ve fled. How long, O Lord?"

The bishop said he felt the need to raise his voice, as a Christian, as a pastor and as an American bishop "who has crossed this ‘demilitarized zone’ to kneel before and learn from Christ in the suffering. And I have learned that it is we who are causing him to suffer," he said.

Although there is much suffering, there also is a lot of good taking place, in the works by those who care for stranded asylum-seekers, he said, in the way different faith groups -- Catholic, Protestants and others -- have learned to work close with one another, and the hope of those who continue to struggle for a better life, including some of the moms he met, who are trying to provide a better future for their children.

"That hope shows me that the machinery of darkness which our immigration enforcement has become is not permanent," he said. "There will be a day when all of this pain will be no more, when the walls of hatred come tumbling down and when grace will transform the dark present into something better. But it is ours to undo. The Lord entrusts the present moment to our freedom and responsibility."

He added, "To transform racism and hatred into repentance and reconciliation. To transform divisions ancient and modern into occasions for encounter and forgiveness. To transform the weight of the law into the sweetness of mercy. To stop the suffering."

Show Comments ()
Join the conversation: Login or create an account
Before you can comment, you need to update your profile to include your first and last name, as required in our comments policy. Then reload this page and you'll be set up for commenting. Update your profile
Advertisement
More: Immigration / Racism / Mexico / Latin America