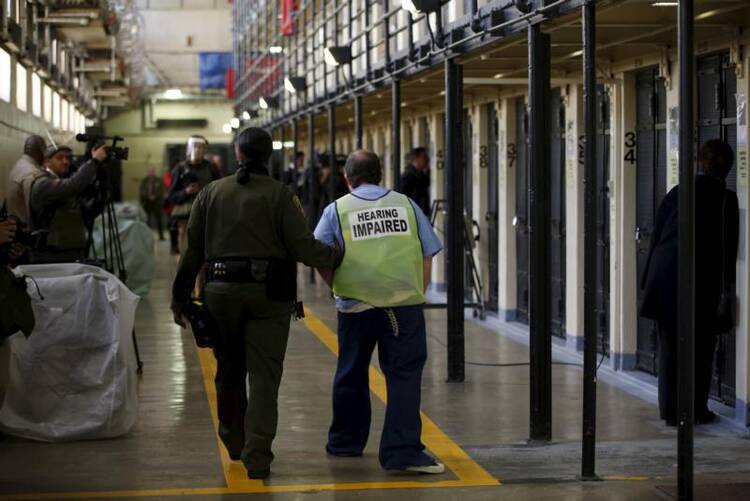 A guard escorts a hearing-impaired inmate down a corridor during a media tour of death row at San Quentin State Prison in California. File photo from Feb. 5, 2016. (CNS photo/Stephen Lam, Reuters)

Over 500 people imprisoned at the San Quentin State Prison in California have contracted Covid-19 as numerous U.S. states grapple with an influx of cases and the disease continues its assault on the nation’s incarcerated population. Richard Stitely, a 71-year-old death row inmate at the prison, died on June 24 after exhibiting Covid-like symptoms. Health experts now warn that the outbreak could affect the larger Bay Area, and California is already seeing an increase in cases as the state moves ahead with reopening.

George Williams, S.J., the Catholic chaplain at San Quentin, spoke with America about conditions inside the prison and what needs to be done to protect its especially at-risk inmates.

“The real issue isn’t Covid, per se. Obviously, it’s a catastrophic problem. But I think what it’s shedding light on is the systematic problem of just having so many people incarcerated in this country, especially overrepresented by communities of color,” said Father Williams, who said he has Covid-19 and became symptomatic last Saturday. “We’re seeing the result of just really bad policies that have made up our criminal justice system for the last 30 or 40 years.”

According to the latest figures from the Bureau of Justice Statistics, the U.S. prison population numbered 1,465,200 persons, a 1.6 percent decrease from the previous year. At the end of 2018, the imprisonment rate for black adults (age 18 or older) was 1,500 per 100,000 people. Contrast these figures with that same year’s imprisonment rate for white adults: 268 per 100,000.

By the end of 2018, California had 128,625 men and women behind bars. An April 2019 report by The New York Times states that the United States “still has the largest known incarcerated population in the world.”

Father Williams describes the five-tier San Quentin prison complex as overcrowded and distinguished by “decrepit” structures. Two-person open cells are windowless, poorly ventilated and extremely cramped. (He estimates their size as five feet wide by 11 feet deep and seven feet high.) Father Williams said that the transfer of some 100 men from the California Institution for Men in Chino, Calif., the site of another coronavirus outbreak, created the conditions for a health crisis at San Quentin.

Within two weeks, coronavirus cases at the prison skyrocketed from 11 to more than 500.

By the end of 2018, California had 128,625 men and women behind bars. An April 2019 report by The New York Times states that the United States “still has the largest known incarcerated population in the world.”

“It’s just like a breeding ground for any kind of disease. [The prison] was told, probably at the beginning of the pandemic, that they should cut their population in half,” said Father Williams. He blames inhumane policies, not the prison guards, for creating a situation where prisons are occupied past capacity and where elderly inmates, some incarcerated for decades, languish on death row.

“The whole criminal justice system we have is fundamentally unjust,” he said, arguing that the U.S. prison system needs to be rebuilt “from the ground up.”

He advocates for “a change in a cultural attitude of punitiveness” and sentencing reform, especially the reduction of harsh sentences for nonviolent criminal offenses. According to a 2018 report from the Sentencing Project, people “convicted of felonies in the U.S. are more likely both to be sentenced to prison and to serve more time in prison than in comparable nations.”

San Quentin is one of several U.S. prisons overwhelmed by Covid-19. At least 48,764 incarcerated people across the country had contracted the illness as of June 23. That number represents a five percent increase from the previous week, according to data from The Marshall Project. Cases have ballooned in states like Tennessee and Texas, which have conducted widespread testing of their prison population, and at least 585 inmates died this week nationwide.

“The whole criminal justice system we have is fundamentally unjust,” said George Williams, S.J., arguing that the U.S. prison system needs to be rebuilt “from the ground up.”

Covid-19 wreaked havoc at the nation’s largest maximum security prison, Louisiana State Prison in Angola, where testing was inadequate. At the Cook County Jail in Chicago, 553 inmates and 446 employees, including 22 correctional officers, tested positive for the virus. Seven inmates, two correctional officers and one deputy have died.

Jojo Goldman, detained at Rikers Island during a Covid-19 outbreak in March, described his experience in a makeshift quarantine unit to Jacobin: “It didn’t have none of our minimum standards: no hygiene products, no toothbrush, toothpaste, soap. [I] couldn’t get a shower.”

Earlier this month, the U.S. Supreme Court stopped an order from a federal judge demanding the government transfer over 800 inmates from the Elkton Federal Correctional Institution in Ohio. The A.C.L.U. informed the court that at least 20 percent of the prison’s detainees had contracted Covid-19. As of June 5, nine prisoners had died.