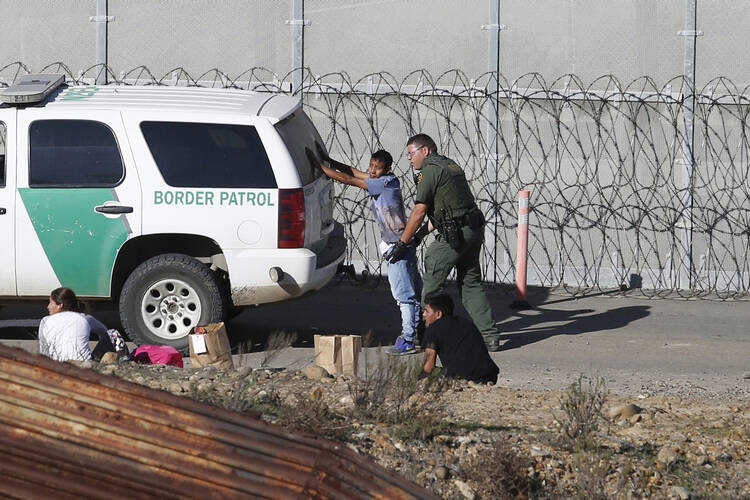 The Supreme Court ruled today that asylum seekers apprehended near the border do not have the right to appeal deportation rulings to a federal judge.

If these asylum seekers fail their initial asylum screenings, immigration officials deport them through a process known as expedited removal. Today’s decision upholds the existing procedure of not allowing asylum seekers to appeal those removal decisions.

“This closes the courthouse to asylum seekers without any check and balance to the Department of Homeland Security’s efforts to curtain asylum.”

“This closes the courthouse to asylum seekers without any check and balance to the Department of Homeland Security’s efforts to curtain asylum,” said Bradley Jenkins, a federal litigation lawyer with the Catholic Legal Immigration Network. The development is troubling, he said, given that deportation decisions can be matters of life and death.

“We had hoped the Supreme Court would recognize that in this circumstance there has to be a certain amount of scrutiny to ensure the system isn’t acting arbitrarily. But the justices have abdicated their judicial role,” he said.

Under U.S. law, asylum seekers need to establish a credible fear of persecution in their home country. Until 2017, the initial screening had been a summary process to “only weed out the most frivolous of cases,” Mr. Jenkins said. The expedited review screenings happen usually within 48 hours of the asylum seeker’s apprehension and often take around an hour.

Most asylum seekers do not have access to counsel. If they fail their credible fear screening, they are placed in the expedited removal process for deportation.

Most asylum seekers do not have access to counsel, he said. If they fail their credible fear screening, asylum seekers are placed in the expedited removal process for deportation. According to the United Nations 1951 Refugee Convention, which the United States signed, migrants can apply for asylum if they have a well-founded fear of persecution in their native country due to race, religion, nationality, membership in a particular social group or political opinion. The United States formally adopted this definition through the 1980 Refugee Act. Among those who pass the initial screening, some asylum seekers are released from detention but must appear before an immigration judge at a later date.

In 2017, the Trump administration changed the threshold that establishes a “credible fear” justifying asylum status. Previously, the “significant possibility” of persecution was enough to clear the initial screening; now applicants must show that a “preponderance of the evidence” points to their suffering persecution if they return to their native country. “They are doing so many things to functionally eliminate asylum,” Mr. Jenkins said.

Another problem, according to Mr. Jenkins, is that the attorney general, who is appointed by the president, oversees the Justice Department, which oversees immigration courts. This can lead to a lack of judicial independence, he said. Clinic and legal groups have advocated for an independent body, separate from the executive branch, to oversee the immigration court system.

“What’s worrisome about it is that there’s no constitutional check on the executive system if Congress doesn’t provide that check,” Mr. Jenkins said. He added that Congress must now ensure judicial independence from the Justice Department and the right to due process in the immigration courts.

“The asylum system as it is does not guarantee justice for people fleeing persecution.”

With the Trump administration curbing asylum approvals, Ashley Feasley, director of policy at the Office of Migration Policy and Public Affairs at the U.S. Conference of Catholic Bishops, is focusing on the circumstances of those fleeing danger. Asylum seekers coming from places like Syria and Central America fear for their lives, she said.

“The asylum system as it is does not guarantee justice for people fleeing persecution,” Ms. Feasley said. The Supreme Court decision erroneously presupposes a just immigration system, she said.

The Supreme Court decision overturns a ruling from last year, Thuraissigiam v. USDHS, in the Ninth Circuit Court of Appeals. That case involved Vijayakumar Thuraissigiam, who was jailed and tortured for political activity during the civil war in Sri Lanka, according to court documents. He fled the country in 2016 and eventually crossed the U.S.-Mexico border in 2017. After he made it 25 yards into the United States, a Border Patrol agent arrested him.

While Mr. Thuraissigiam requested asylum, he failed his credible fear interview. He said the agent rejected his claim after a cursory hearing and refused to hear important context. The court ordered his deportation back to Sri Lanka.

While the Supreme Court ruling has been called a victory for the Trump administration, the decision written by Justice Samuel Alito cited a 1996 law signed by President Bill Clinton. The Illegal Immigration Reform and Immigrant Responsibility Act transformed immigration enforcement by establishing “fast-track” deportation procedures.

“It was Congress’s judgment that detaining all asylum seekers until the full-blown removal process is completed would place an unacceptable burden on our immigration system and that releasing them would present an undue risk that they would fail to appear for removal proceedings,” Mr. Alito wrote in the decision.

Since taking office, President Trump has escalated immigration enforcement efforts. For example, the 2019 Migrant Protection Protocols—better known as the “Remain in Mexico” policy—empowers immigration officials to return a number of asylum seekers to Mexico while their cases are decided by the U.S. immigration court system.

In 2018, the Trump administration implemented a “zero tolerance” enforcement strategy on the border, leading to the separation of thousands of immigrant families at the border. Under that policy, the U.S. government would prosecute everyone who crossed the border illegally, including asylum seekers.

Later that year, the administration tightened the grounds on which immigration judges could grant asylum. The change led to an increase in denial rates, according to a study by Syracuse University.

The Associated Press contributed to this report.