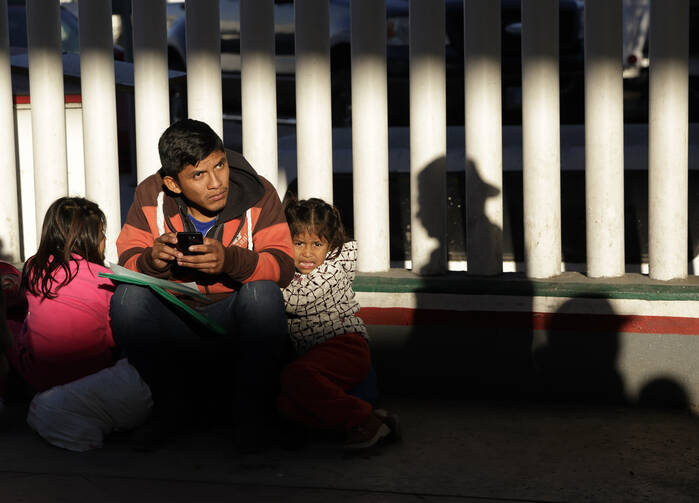 In this Jan. 25, 2019, file photo, a migrant who did not give his name looks on with his children as they wait to hear if their number is called to apply for asylum in the United States, at the border in Tijuana, Mexico. (AP Photo/Gregory Bull, File)

Migrants seeking asylum at the U.S. border must first convince an immigration judge or asylum official that they have a credible fear of persecution in their home country. If their claim of credible fear is rejected, they face immediate deportation. The question before an appeals court in California was whether asylum seekers have the right to challenge the result of the initial screening and make their case for asylum in federal court.

On March 8, a three-judge panel in the Ninth Circuit Court of Appeals ruled asylum seekers who fail the credible fear test have a right to appeal.

“The bottom line, from a lawyer’s perspective, is that the federal courts have to ensure checks and balances, which wasn’t the position of the executive branch,” according to Bradley Jenkins, an attorney with the Catholic Legal Immigration Network.

A three-judge panel in the Ninth Circuit Court of Appeals ruled asylum seekers who fail the credible fear test have a right to appeal.

Furthermore, the decision creates a “circuit split” with the Third Circuit Court of Appeals, which had ruled that asylum seekers do not have the right to appeal credible fear decisions, Mr. Jenkins told America.

“The Third Circuit made it about how much connection the person has to the United States,” he said. “We disagree with that.” The contradictory rulings could eventually lead to a decision from the Supreme Court, Mr. Jenkins said.

Giving asylum seekers the right to appeal is important, he said, because some immigration judges “are eager to get through cases. Some have taken what we consider to be unlawful shortcuts.” Mr. Jenkins pointed to a case in which the asylum seeker’s counsel was not allowed to speak in court.

“The historical and practical importance of this ruling cannot be overstated,” according to the deputy director of the A.C.L.U.’s Immigrants’ Rights Project.

“That’s the kind of claim that would need to be corrected by a court,” he said. The decision by the Ninth Circuit is based on the suspension clause in the U.S. Constitution, Mr. Jenkins said, adding that the decision found “Congress runs afoul of the Constitution in their suspension of habeas corpus.”

The Ninth Circuit decision has a direct impact on decisions in California and Arizona, he said. It is unclear what impact the ruling will have on decisions in Texas and New Mexico, which fall under the Fifth and 10th Circuit courts, respectively, Mr. Jenkins said.

The American Civil Liberties Union brought the case, Thuraissigiam v. USDHS, to court. According to court documents, Vijayakumar Thuraissigiam was jailed and tortured for political activity during the civil war in Sri Lanka. He fled the country in 2016 and eventually crossed the U.S.-Mexico border in 2017. After he made it 25 yards into the United States, a Border Patrol agent arrested him.

Mr. Thuraissigiam requested asylum but was denied after the credible fear interview. He said the agent rejected his claim after a cursory hearing and refused to hear important context. Mr. Thuraissigiam’s petition for an appeal was denied.

“The historical and practical importance of this ruling cannot be overstated,” according to a statement from Lee Gelernt, the deputy director of the A.C.L.U.’s Immigrants’ Rights Project. “This decision reaffirms the Constitution’s foundational principle that individuals deprived of their liberty must have access to a federal court.”

Mr. Gelernt told the Associated Press that the decision “will mean that thousands of current and future noncitizens will not be sent back to potential death without a federal court looking at their case.”

Immigration judges denied a record number of asylum claims in the fiscal year of 2018, according to Syracuse University. Last year, judges decided 42,224 cases, a sum that exceeds the 2017 tally by 40 percent. As of Jan. 7 of this fiscal year, judges denied asylum in 65 percent of such cases, marking the sixth year in a row that denial rates have increased.

The Associated Press contributed to this report.

How many billions could claim asylum? Why was a gentleman from Sri Lanka on our southern border? He must have passed through several countries. Why not seek asylum in India? Why use a photo of children above? Why doesn’t the author who has written about 90 articles on immigration ever propose a comprehensive immigration policy? Why doesn’t America the magazine ever propose a comprehensive immigration policy? What is the end game they want?

Legally, as many as want to can claim asylum. That's international law to which the US holds true. A gentleman from Sri Lanka is, by international law and US law, allowed to seek asylum in whatever country he chooses. Just like anyone else is afforded the same right. Why doesn't ANYONE on the far-right propose any kind of immigration policy that isn't inherently racist or xenophobic? What is the end game? People being safe. Shame on you for implying it's something else.

Thank you again for being so far off the truth, that you are actually endorsing my position. How is anything proposed racist? The answer it is not. Nearly all the immigrants for the last 50 years have been non European. Nobody is suggesting that this be changed in any dramatic manner. The less racism is a factor in our society the more people scream people are racist. I wonder why?

The end game is not people being safe or else they would be arguing against allowing illegal immigrants into the country. Instead they encourage this dangerous migration. The argument should always be finding a better life for them where they live since the US cannot take more than a small percentage. That is not the argument liberals and America, the magazine is making. They are encouraging extremely dangerous situations. So the shame is on them and those who accept their policies.

The end game is not people being safe or else they would be arguing against allowing illegal immigrants into the country. Instead they encourage this dangerous migration. Story