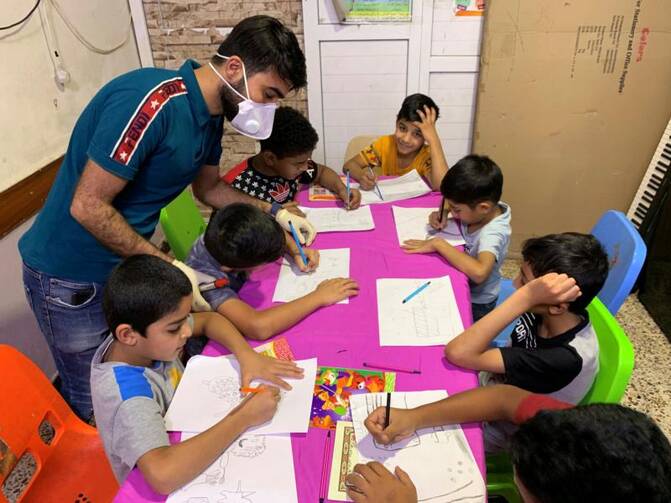 A man helps Iraqi children draw in the classroom of an orphanage in Baghdad June 3, 2020. A new Lancet report urges institutionalization of children to be phased out in favor of family-based care. (CNS photo/Maher Nazeh, Reuters)

CAPE TOWN, South Africa (CNS) -- A new report calling for the phasing out of institutionalized care for children confirms what Catholic Relief Services and its partners have been saying for many years, said a CRS director.

"Children belong in families, and we work to get this message to everyone," including governments, faith organizations and civil society, Anne Smith, CRS global director for Changing the Way We Care, told Catholic News Service in a June 22 phone interview.

A two-part report by 22 experts on reforming care for children was published late June 23 in The Lancet Psychiatry and The Lancet Child & Adolescent Health journals. It said the institutionalization of more than 8 million children worldwide should be phased out in favor of family-based care.

Institutions provide suboptimal care and are associated with many developmental delays, the report said. Children can rapidly recover when they are moved into a family environment, although some effects might last into adulthood, it said.

The report "confirms what we have been saying all along," Smith said, noting that CRS and its partners, Lumos and Maestral International, help support families around the world to keep their children with them and to reunite them with members from institutions.

In Zacapa City, Guatemala, for example, a mother was helped to take home her 10-year-old daughter and four grandchildren after losing them to a public orphanage when it was found that the 10-year-old was caring for the younger children while the mother went out to work.

Ana Maria Martinez wanted the children home with her and received the psychosocial and economic help she needed to be able to support and nurture them, Smith said.

Noting that poverty, illness and disability often influence family decisions, Smith said sometimes "families feel they have no choice but to have their child in institutional care."

The United Nations defines an orphan as a child under 18 who has lost one or both parents.

Because of lack of services and stigma, people often believe that their children with disabilities would be better off in institutions that provide access to schooling such as those run by communities of sisters, Smith said.

But "it's always better for children's development" to be with families, she said.

The new report gives this issue the attention it deserves, Smith said. Well-intentioned people donate to orphanages with their "support coming from the heart," and this report will help with the understanding "that there are other ways to support children that have better outcomes," she said.

In Kenya, CRS and its partners worked to strengthen government and civil society to help them address the needs of families with children in institutions, Smith said.

"We've seen policies change here as well as some children reintegrated with their families," she said, noting that "there is so much potential for positive change."

The report calls for child protection systems to gradually redirect funding away from institutions to community-based and family-based programs. The authors propose ways to ensure child safety, to protect children without parental care by providing high-quality family-based alternatives, and to strengthen systems for the care and protection of children.