What does Trump’s reversal of transgender health care policy mean for Catholic providers? 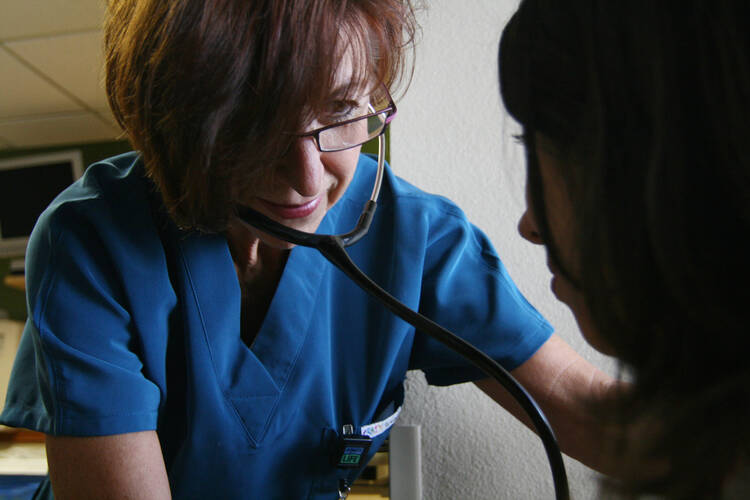 A nurse listens to the heartbeat of an unidentified woman at St. Joseph's Hospital and Medical Center in Phoenix. (CNS photo/J.D. Long-Garcia, The Catholic Sun)

A five-year conflict over an anti-discrimination clause within the Affordable Care Act appeared to conclude on June 12 when the Trump administration issued a final rule for Section 1557, reverting to a previous understanding of discrimination by sex that does not include gender identity or termination of pregnancy. The revision was deplored by advocates for L.G.B.T. rights, who said it could cut vulnerable communities off from health services, but it was welcomed by the U.S. Conference of Catholic Bishops.

The conference said in a statement on June 12 that the Trump administration’s final rule, first proposed in May 2019, “will help restore the rights of health care providers—as well as insurers and employers—who decline to perform or cover abortions or ‘gender transition’ procedures due to ethical or professional objections.”

The conference added: “Catholic health care providers serve everyone who comes to them, regardless of characteristics or background. However, there are ethical considerations when it comes to procedures. We greatly appreciate today’s important action.”

The Trump administration's rule was deplored by L.G.B.T. advocates, who said it could cut vulnerable communities off from health services but welcomed by U.S. bishops to “restore the rights of health care providers.”

The A.C.A.’s Section 1557 provides that individuals cannot be subject to discrimination based on their race, color, national origin, sex, age or disability. Under a revision proposed in 2015, the Obama administration included “gender identity” and “termination of pregnancy” without an exemption for religious providers.

Though religious liberty-based claims in declining to provide mandated or implied procedures are protected under existing federal law and other language included within the A.C.A. itself (Section 1303), that absence in Section 1557 worried Catholic and other religious health service providers unwilling to sponsor procedures like nontherapeutic abortion or gender reassignment therapy or surgery. The implementation of that expansion of Section 1557 was enjoined by a federal court in 2016, which concluded that its provisions were likely contrary to applicable civil rights law, the Religious Freedom Restoration Act and the Administrative Procedure Act.

Commenting on the Trump administration’s final rule, Luke Goodrich, vice president and senior counsel at Becket, a religious liberty law firm in Washington, said: “No doctor should be forced to perform a procedure she believes would harm a patient. The new rule will help ensure that all patients receive top-notch care without forcing doctors to perform potentially harmful procedures in violation of their religious beliefs and medical judgment.”

“Abortion is not health care and should never be mandated by the government,” said the organization’s president, Marjorie Dannenfelser.

But the final rule was criticized by the L.G.B.T. rights advocate the Human Rights Campaign, which charged that it will allow medical practitioners to turn away L.G.B.T. people, discrimination that would prove especially catastrophic during the coronavirus pandemic.

“We cannot and will not allow Donald Trump to continue attacking us,” said H.R.C. President Alphonso David in a statement on June 12. “Today, the Human Rights Campaign is announcing plans to sue the Trump administration for exceeding their legal authority and attempting to remove basic health care protections from vulnerable communities, including L.G.B.T.Q. people. And, to add insult to injury, the administration finalized this rule on the anniversary of the Pulse shooting, where a gunman killed 49 people in an L.G.B.T.Q. nightclub.

The Catholic Health Association “asked for conscience protections. But we do not want members of the L.G.B.T. community to be discriminated against or to be afraid to get health care.”

Some recent reports on medical access suggest grounds for those concern, particularly for transgender patients. Almost 30 percent of the respondents to a survey from the the National Center for Transgender Equality, released in July 2019, reported that they had postponed medical care after sickness or injury because of discrimination, and 19 percent reported being refused care due to their transgender or gender non-conforming status. According to the report, the numbers were even higher among people of color.

Almost 30 percent said they were subjected to harassment in medical settings, and 2 percent reported that they had been victims of violence in a doctor’s office. Half the respondents reported having to teach their medical providers about transgender care.

According to the report, “A staggering 41 percent of respondents reported attempting suicide compared to 1.6 percent of the general population, with unemployment, bullying in school, low household income and sexual and physical [assault] associated with even higher rates.”

A 2015 survey of L.G.B.T. adults living in long-term care settings from Justice in Aging found that almost 90 percent of respondents believed that nursing home staff would discriminate against an L.G.B.T. elder who was out of the closet—and more than half also predicted that staff would abuse or neglect the person. About 80 percent said that other residents would discriminate against or isolate them.

Roger Severino, head of the Department of Health and Human Services unit that enforces civil rights laws, told The Associated Press that transgender people continue to be protected by other statutes that bar discrimination in health care on account of race, color, national origin, age, disability and other factors.

“Everyone deserves to be treated with respect and according to the law,” said Mr. Severino. “Our dedication to our civil rights laws is as strong as ever.” He cited recent actions to safeguard access to treatment for disabled people in the coronavirus pandemic.

The Catholic Health Association has long pressed for unambiguous religious exemptions on new care standards created by the A.C.A. even as it has condemned discrimination in health care services. In a statement that acknowledged clarity on Section 1557 from the final rule, Mary Haddad, R.S.M., the C.H.A.’s president and chief executive, said: “The Catholic Health Association of the United States is committed to the principle that health care must be available to any person in need of care, without regard to race, color, national origin, sex, age, or disability, or any other category or status.”

The Catholic Health Association has long pressed for unambiguous religious exemptions on new care standards created by the A.C.A. even as it has condemned discrimination in health care services.

She added, “While we welcome the efforts to reaffirm the unique mission of faith-based health care providers, refusing to provide medical assistance or health care services merely because of discomfort with or animus against an individual on the basis of how that person understands or expresses gender or sexuality is unacceptable.”

In 2015, beginning with a letter to H.H.S. from then-President Carol Keehan, D.C., the Catholic Health Association sought an explicit religious exemption in Section 1557. She urged H.H.S. then “to make certain revisions to the proposal to ensure that nondiscrimination on the basis of sex is achieved in a manner that also preserves the religious liberty interests of covered entities.”

Though that exemption is still not part of 1557, the Trump administration’s final rule has, for now, obviated the conflict over competing rights claims.

In a 2019 letter commenting on the proposed final rule, Sister Haddad acknowledged revisions to Section 1557 that will protect Catholic providers from mandated care they object to, but she also expressed concerns about additional H.H.S. proposals to amend health regulations unrelated to Section 1557 that could affect insurance coverage for L.G.B.T. individuals or discourage L.G.B.T. individuals from seeking medical care when they needed it.

Citing a November 2017 survey conducted by the Robert Wood Johnson Foundation, N.P.R. and the Harvard T.H. Chan School of Public Health that found that 18 percent of L.G.B.T. people avoided medical care because of concerns about how they would be treated, the association spelled out its concerns:

C.H.A. believes strongly that individuals should not be denied access to needed health care merely because of their gender identity. Refusing to provide medical assistance or health care services because of discomfort with or animus against an individual on the basis of how that person understands or expresses gender is unacceptable.… We are deeply troubled that the overall effect of all of the proposed regulatory amendments could discourage or prevent individuals from seeking medical care out of fear that they will be mistreated or turned away because of their gender identity or sexual preference. We ask that H.H.S. not finalize the proposed conforming amendments and include in the final rule a commitment to taking whatever steps it can to make sure no one fears seeking or is kept from receiving health care.

Ina statement released on June 12, the American Hospital Association expressed concerns about the possible impact of the administration’s final rule: “Hospitals and health systems value every individual we have the privilege of serving, regardless of race, religion, national origin, sexual orientation or gender identity. That is why we urged the administration to not move forward with changes to non-discrimination protections.

“We are deeply disappointed that this rule weakens important protections for patients and could limit coverage. Treating all with dignity and respect will continue to guide us in everything we do.”