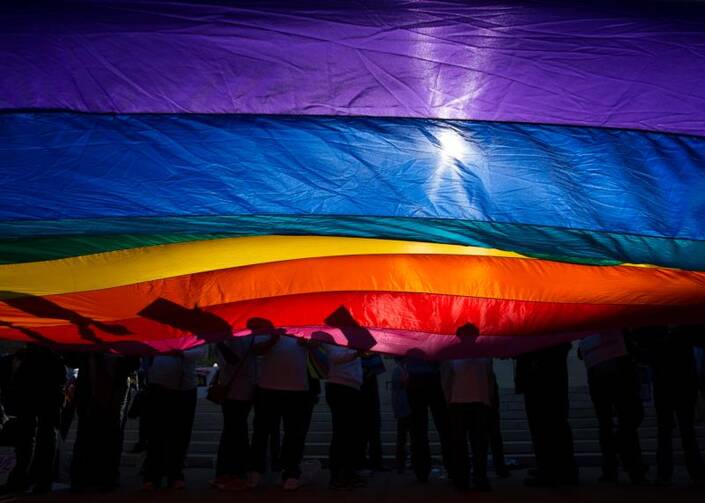 WASHINGTON (CNS) -- In a 6-3 vote June 15, the Supreme Court said LGBT people are protected from job discrimination by Title VII of the Civil Rights Act of 1964.

"An employer who fires an individual for being homosexual or transgender fires that person for traits or actions it would not have questioned in members of a different sex," said Justice Neil Gorsuch writing the opinion in the case argued at the start of the court's term last October.

He pointed out that when Congress enacted Title VII, it might not have expected "this particular result." But he also said Congress likely didn't see many interpretations of the federal law coming, including its prohibition against discrimination on the basis of motherhood or its ban on the sexual harassment of male employees.

"Only the written word is the law, and all persons are entitled to its benefit," Gorsuch wrote.

The decision was for two consolidated cases about fired gay employees and a separate case concerning a fired transgender worker who had sued for employment discrimination after being fired.

At issue in this case is the wording in the Civil Rights Act, which prevents employment discrimination based on race, religion, national origin and sex. The court had to determine if discrimination that was not allowed based on sex applied to sexual orientation as well as gender identity.

Federal appeals courts have been divided on this application of the law for the past three years since the U.S. Court of Appeals for the 7th Circuit became the first to rule that homosexuals should be protected from job discrimination by the civil rights law.

"Sex means whether you're male or female, not whether you're gay or straight," argued Solicitor General Noel Francisco for the Trump administration on the side of the employers during oral arguments.

But Justice Sonia Sotomayor said the issue of people being fired for their sexual identity had to be examined, noting: "We can't deny that homosexuals are being fired merely for being who they are."

Alito, joined by Thomas, wrote more than 100 pages in the dissent and said the court's majority seemed to be writing legislation, not law, in this decision.

"The question in these cases is not whether discrimination because of sexual orientation or gender identity should be outlawed," Alito said. "The question is whether Congress did that in 1964," and he said it "indisputably did not."

Kavanaugh, in a separate dissent, said the court was attempting to "rewrite ordinary meaning and remake American law," acting more like members of Congress than judges.

The decision, hailed by supporters, was questioned by its opponents who wondered how it would hold up in religious liberty cases. The opinion itself mentions this saying: "How these doctrines protecting religious liberty interact with Title VII are questions for future cases."

It also notes that "other employers in other cases may raise free exercise arguments that merit careful consideration, none of the employers before us today represent in this court that compliance with Title VII will infringe their own religious liberties in any way."

A number of religious groups including the U.S. Conference of Catholic Bishops weighed in with friend-of-the-court briefs in favor of the employers in this case. The USCCB brief said the added employee protection could impact faith-based schools, health care providers and homeless shelters that operate by "religious and moral convictions."

Dozens of companies and advocacy groups filed briefs in support of the employees.

In a statement released Monday, Archbishop José H. Gomez of Los Angeles, the president of the U.S.C.C.B., criticized the court's "redefinition" of sex under U.S. law. "Every human person is made in the image and likeness of God and, without exception, must be treated with dignity, compassion, and respect. Protecting our neighbors from unjust discrimination does not require redefining human nature," reads the statement. The U.S. bishops also added that sex is "part of God's plan" and that "[n]o one can find true happiness by pursuing a path that is contrary to God’s plan."

Currently, more than 20 states and the District of Columbia have laws in place to protect against employment discrimination based on sexual orientation and gender identity with exceptions for religious employers.

Luke Goodrich, vice president and senior counsel of Becket, a nonprofit religious liberty law firm, told reporters before the Supreme Court's term began that if the court views these employee cases as discrimination, there will likely be new lawsuits and "massive liabilities with churches, schools and religious organizations" that expect their employees to follow certain standards.

He said there are exceptions for those in ministerial roles with a religious function. But no matter how these exemptions are interpreted, there is likely to be a lot of confusion, he said.

Alliance Defending Freedom, a nonprofit legal group, which supports religious freedom and other issues, said in a June 15 statement: "Americans must be able to rely on what the law says, and it is disappointing that a majority of the justices were unwilling to affirm that commonsense principle. Redefining sex to mean gender identity will create chaos and enormous unfairness for women and girls in athletics, women's shelters and many other contexts."

New Ways Ministry, which advocates for L.G.B.T. Catholics, supported the court's decision as a step in the right direction. "While pro-LGBTQ Catholics, who are the overwhelming majority in the U.S. church, will obviously applaud this decision, even Catholics who take a negative stance toward LGBTQ people should welcome this decision because it is absolutely in agreement with Catholic teachings about the human dignity of LGBTQ people, anti-discrimination, and respect for workers’ rights," said the group Monday via a press statement. The organization added a note of caution regarding the decision, writing that this new law may not protect L.G.B.T. employees in church institutions from workplace discrimination.

"[I]t is sad that the Supreme Court is ahead of the Catholic Church when it comes to employment non-discrimination—a policy which should Catholic teaching speaks of eloquently in its words, but fails miserably in putting into practice," reads the statement.