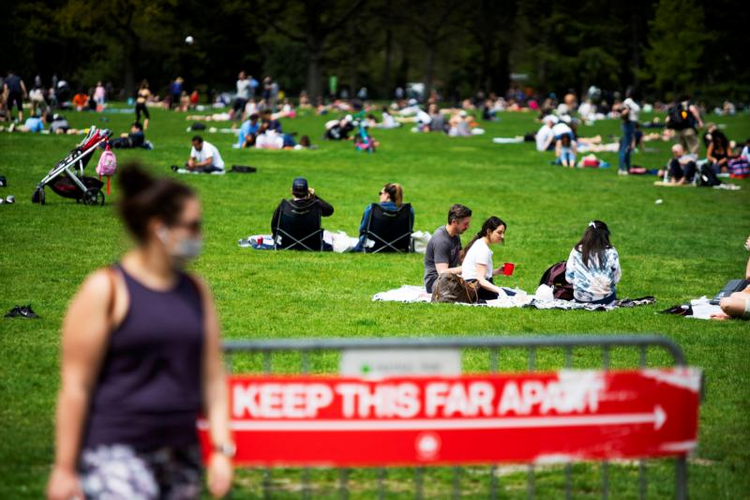 People are seen at Central Park in New York City May 2, 2020, during the the coronavirus pandemic. Blacks and Latinos have been affected by the pandemic at many levels, from losing their jobs and health insurance to getting sick and having limited or no access to health care, putting them in vulnerable situations, panelists said June 11 during an online roundtable sponsored by Georgetown University's Initiative on Catholic Social Thought and Public Life. (CNS photo/Eduardo Munoz, Reuters)

WASHINGTON (CNS) -- Latino immigrants and their families impacted by the pandemic and the outcry against racism lack the assistance networks that others have, but they are finding support in their relatives and parish communities, according to speakers on a June 11 panel.

Georgetown University's Initiative on Catholic Social Thought and Public Life sponsored an online roundtable of Latino young adults who discussed the topic "Justice and Faith, Family and Community: Latino Leadership in a Time of Crisis."

Blacks and Latinos have been affected by the pandemic at many levels, from losing their jobs and health insurance to getting sick and having limited or no access to health care, putting them in vulnerable situations, the panelists said.

"Knowing that my parents don't have health insurance, I knew I did not want to put them at risk of contracting COVID, knowing that if they did so the bills that they would get would be tremendous," said Juan Belman Guerrero, a program manager for the Kalmanovitz Initiative for Labor and the Working Poor at Georgetown University.

Guerrero's parents did not qualify to receive an economic impact check from the federal government because his mother does not have a Social Security number. The pandemic also forced him to postpone his wedding this spring.

"To the government, to businesses, we can be seen as disposable workers," Guerrero added.

At the same time, some Latinos and other communities of color also have endured the racism and injustice exposed by the death of George Floyd, an African American man who died while in police custody. The incident has sparked outrage and protests around the country.

Many bishops, priests, religious and lay Catholics have joined thousands of people expressing solidarity with the Black Lives Matter movement and the need to address and reject racism, injustice and police brutality.

"When they began to speak about Black Lives Matter, they were also referring (to) people who are crossing the border, people who have been immigrants here for years here, people who are just waiting to be approved in order to be documented workers in the United States," Bishop Dorsonville added.

The prelate went on to address the responsibility that societies share in the human drama that immigrants and others living in poverty experience. He stressed the need to find a way to promote and live out the essential Catholic social teaching of respecting the human dignity of every person.

Bishop Dorsonville, who chairs the U.S. Conference of Catholic Bishops' Committee on Migration, highlighted that immigrants are on the front line fighting the pandemic despite the impact on them and their families.

"Our 'Dreamers,' TPS people, people who have been working, are being the shining stars of this pandemic," the bishop said. "they are the front liners. We see them working in hospitals, on farms, in factories. They are bringing the good news of being faithful citizens."

"Dreamers" are the young people who were brought as children into the country illegally by their parents and are of the Deferred Action for Childhood Arrivals program, or DACA. "TPS" stands for Temporary Protected Status, a temporary immigration status provided to nationals of specifically designated countries that are confronting an ongoing armed conflict, environmental disaster, or other extraordinary but temporary conditions

The pandemic is disproportionately affecting Latino communities, but the disparities began long before the epidemic struck, said Michael Okinczyc-Cruz, executive director and co-founder of the Coalition for Spiritual and Public Leadership in Chicago.

"The conversation has to begin before COVID. We live in a society that has been ravaged by racism and vast economic disparities for generations," said Okinczyc-Cruz.

"We have millions of immigrants who contribute so much to this country and who were completely left out of the stimulus package when we gave over half a trillion dollars to corporations that in many respects still laid out their workers," stressed Okinczyc-Cruz.

Freelance writer Olga Segura stressed the importance of creating spaces for dialogue about race in communities and among families and friends, even if at first it makes everyone feel uncomfortable.

"It's OK to sit in that discomfort; it's OK to sit with your community and have those conversations, because that's the number one way that we're going to move forward," Segura said.

Those wishing to get involved can help support communities impacted by the pandemic and those working on anti-racism efforts by giving monetary donations to organizations working toward those causes, Segura added.

Like Guerrero, Segura also has helped relatives who have been negatively impacted by the pandemic.

And parishes across the country are doing a great job trying to help families that are affected, reported Bishop Dorsonville. Speaking from his experience at the Archdiocese of Washington, he said that parishioners have been incredibly supportive in providing food and assistance to those in dire need.

"The point is also to see that we do this because we're inspired by faith," the prelate said.

Norma Montenegro Flynn - Catholic News Service
Provide feedback on this article
Join the conversation: Login or create an account
Before you can comment, you need to update your profile to include your first and last name, as required in our comments policy. Then reload this page and you'll be set up for commenting. Update your profile