The U.S. is exporting Covid-19 to Latin America. We should instead be working with our neighbors. 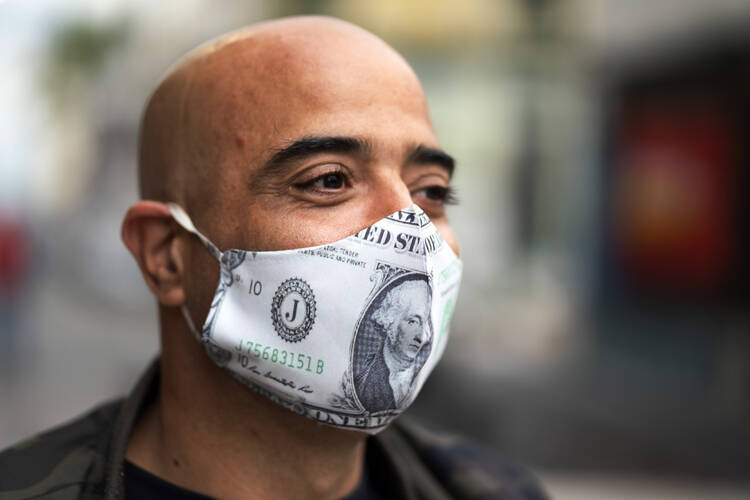 A man waits in line for food assistance during the lockdown to contain Covid-19 in Montevideo, Uruguay, on April 25. (AP Photo/Matilde Campodonico)

Covid-19 could not come at a worse time for Latin America. The region has been shaken by one crisis after another, from ongoing violence in Mexico to the millions of refugees who have fled political instability in Venezuela. The Covid-19 pandemic will exacerbate these challenges while creating new ones that could push the region’s political systems to the breaking point. In a possible sign of what is to come, Ecuador has been unable to collect the bodies of those who have died of the coronavirus. The harrowing scenes of bodies left on the streets for days could soon be repeated throughout Latin America—unless the United States acts.

For the moment, the United States is too preoccupied with its own outbreak to pay much attention to the dangers faced by our neighbors to the south. But any crisis in Latin America inevitably affects the United States. And rather than partner with our neighbors to coordinate a hemispheric response to the coronavirus, the Trump administration may make the situation in Latin America worse.

Deportees who have contracted Covid-19 in the United States may become vectors of the disease when they return to Latin America.

Nowhere is this more evident than in U.S. asylum and deportation policy. The coronavirus is already spreading through unsanitary and cramped U.S. immigrant detention facilities, with Immigrations and Customs Enforcement ignoring urgent calls from the Congressional Hispanic Caucus to release detainees. And deportees who have contracted Covid-19 in the United States may become vectors of the disease when they return to Latin America. The United States is effectively exporting the pandemic. At least 100 Guatemalan deportees from the United States have already tested positive. The Guatemalan health minister went so far as to compare the United States with Wuhan, China, where the Covid-19 outbreak first began. Deportations to Haiti are also continuing, though the medical system there is perhaps even less equipped to deal with a pandemic than the ones in Central America.

Similarly, President Trump’s “Remain in Mexico” policy created squalid and cramped refugee camps along the U.S.-Mexico border, where thousands of asylum seekers are at high risk of contracting the virus. The Trump administration is now using Covid-19 to justify turning away people seeking to exercise their international human right to seek asylum, making a humanitarian crisis even worse. As many public health experts argue, migrants need a safe place to shelter; forcing them to remain in these crowded and unsanitary conditions only makes it more likely that the virus will spread.

Cruel policies like deportations and border closures risk deepening a crisis that will affect not only Latin America but also the United States. The Americas are inextricably connected. For example, U.S. medical supplies depend on Mexican supply chains, while U.S. food security depends on largely immigrant farmworkers, most of them undocumented. A Covid-19 outbreak in the cramped and unsanitary conditions of the refugee camps along the border could devastate the Mexican border cities where Mexican workers build the ventilators the United States relies on. An outbreak anywhere in Latin America would be just one American business executive’s trip away from sparking the feared “second wave” of the disease in the United States. Meanwhile, a prolonged economic crisis in the region will no doubt worsen the root causes of Latin American migration, sending yet more people north in search of survival.

A prolonged economic crisis in the region will no doubt worsen the root causes of Latin American migration, sending yet more people north in search of survival.

The Trump administration seems unlikely to do any of this. As the U.S. election season kicks into high gear, Mr. Trump has so far treated the pandemic as an opportunity to return to his 2016 campaign themes of disparaging immigrants and building walls. His confusing attempts to “ban immigration,” ostensibly to “protect American workers,” are just the beginning. What he has called the “China virus” could become the 2018 midterm election’s Central American caravan panic all over again, even after the El Paso massacre made the danger of such rhetoric all too clear.

Americans with a more positive vision of the United States’ relationship with our Latin American neighbors must be ready to make the opposite case. With both my grandmothers living in Mexico City, doing so is personal for me, as it will no doubt be for the millions of Americans who have family south of the Rio Grande. This is perhaps enough people to swing an election, and there is certainly an opportunity to politically organize Latino communities already disproportionately hit by the pandemic’s effects at home.

There is no wall we can build against a virus. Nor is there a way for the United States to decouple economically from Latin America. But Covid-19 presents a rare opportunity for the United States to demonstrate principled leadership in the Western Hemisphere and to create some good will in a region where we have a checkered past. Congressional, state and local leaders should find ways to partner with our Latin American neighbors even if the president will not. Gov. Gavin Newsom of California, who visited El Salvador early in his term in office, might lead the way by sending any surplus medical supplies to Central America, as he did for Michigan and New York. Congress, recognizing the crucial role of remittances in many Latin American economies, should include tax-paying immigrants in future economic relief packages. And every American who depends on crops picked by Latin American hands, or goods made in Latin American factories, should take more time to reflect on just how interconnected our hemisphere is.

The World War II metaphor made by some world leaders in response to Covid-19 might be helpful here. After the attack on Pearl Harbor, most Latin American countries joined the Allies out of solidarity with the United States. Mexico would join shortly afterward, when German U-boats sank Mexican tankers carrying oil bound for the American war effort. Today, Latin America is again supplying much of the labor and resources the United States needs to “win.” The United States cannot allow Covid-19 to devastate the lands of our neighbors. It cannot continue policies that insult and endanger those who should be our partners in a shared struggle. We need now what we had then: the Americas united against a common enemy.

Antonio De Loera-Brust is a former Joseph A. O’Hare fellow at America Media. He most recently worked as a policy staffer on the Julián Castro and Elizabeth Warren presidential campaigns and has written on sports, politics and Latin America for America.