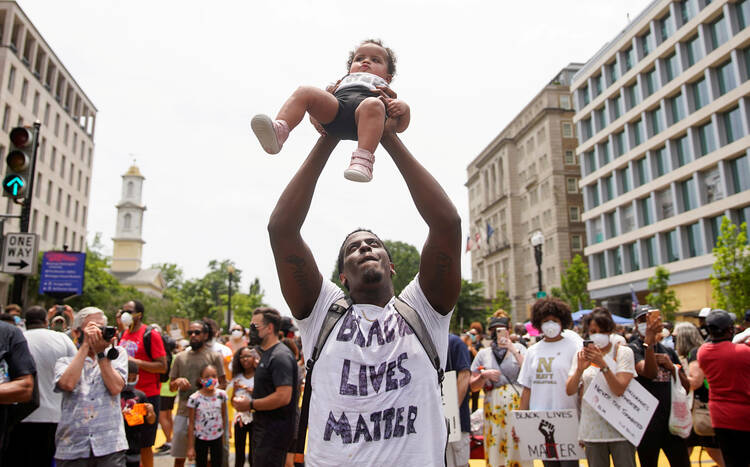 A man in Washington holds up a child during a protest against racial inequality June 6, 2020. Demonstrations continue after a white police officer in Minnesota was caught on a bystander's video May 25 pressing his knee into the neck of George Floyd, an African American, who was later pronounced dead at a hospital. (CNS photo/Eric Thayer, Reuters)

White Catholics need to be challenged by their religious leaders if the church is to be an effective partner in the fight against systemic racism because for too long “the Catholic Church has prioritized the comfort of whites over a commitment to justice.”

That is the message from the Rev. Bryan Massingale, an ethicist at Fordham University who has spent his nearly four decades as a priest working for racial justice in the church. In an interview with America on June 5, Father Massingale said the recent viral video of a white woman in New York calling the police to report an African-American man who asked her to obey park rules compelled him to reflect on how white supremacy operates in the United States.

“What Amy Cooper reveals are the dynamics of whiteness that sustain the entire system of racism,” Father Massingale said. “She assumed that her race would work in her benefit.”

He said the viral video was effective in showing how white privilege works because he thinks most white people believe they are not capable of carrying out the type of violence that resulted in the killing of George Floyd by a Minneapolis police officer. In Ms. Cooper’s case, calling the police on Christian Cooper and emphasizing his race was a reflexive act, the result of systematic racism that taught her and other white people how to use race to their advantage.

Bryan Massingale: “All too often in this church, we find a concern for pro-life being used to soft-pedal concern for racism.”

“We know how it works, even though we don’t want to admit it,” he added.

White people should feel discomfort when confronted with the reality of white privilege in the United States, Father Massingale said, and sit with that discomfort. “Let it be agonizing, let it be overwhelming because frankly it’s agonizing for me, too. It’s overwhelming for me, too,” he said. “It’s only when we become agonized enough, angry enough...that we begin to be invested in change.”

Asked about protests that have taken place in every U.S. state, Father Massingale said he is hopeful that this movement leads to change. He noted the large presence of white people attending rallies and protests and said while that is encouraging, voices of people of color need to stay front and center.

As for the church, he said Catholics who support the pro-life movement need to be aware of underlying motives.

“All too often in this church, we find a concern for pro-life being used to soft-pedal concern for racism,” he said. “And we’ve seen that in terms of people supporting the policies of a president—saying, ‘He’s a pro-life president’—despite the fact that his administration has enacted a draconian immigration policy, separating families, consigning brown children into cages, a president who has routinely insulted people of color. And yet Catholics will justify their support for him because he’s ‘pro-life.’”

He called President Trump’s visit to two Washington churches earlier this month “blasphemy and sacrilegious,” particularly the walk to St. John’s Episcopal Church that was preceded by the use of tear gas to clear a path through a peaceful protest, and he praised Archbishop Wilton Gregory, who has twice condemned the visits.

“I’m grateful that Archbishop Gregory called it for what it was,” he said, “and my hope and prayer is that his brother bishops would have the same courage and clarity of moral vision to do the same.”

“We want to put qualifiers, saying, ‘I’m for racial justice, as long as they’re not too angry,’ or we want to defend L.G.B.T.Q. people, but we always have to insert that their behavior is immoral,” he said.

Catholics and other believers have a unique role to play in the fight for justice, Father Massingale said, through prayer. He called white supremacy and systemic racism “a spiritual disorder.”

“This reflects a spiritual wound, and until we have the ability to engage in deep forms of prayer, not just saying prayers but deep forms of prayer...asking the Holy Spirit to come into our lives and to change our hearts and to make us willing to see what we’d rather not see, until we’re willing to do that, we’re going to be caught in these perpetual cycles,” he said. 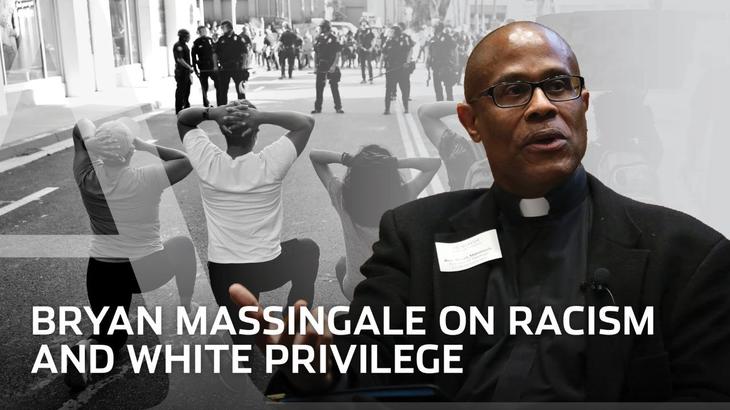