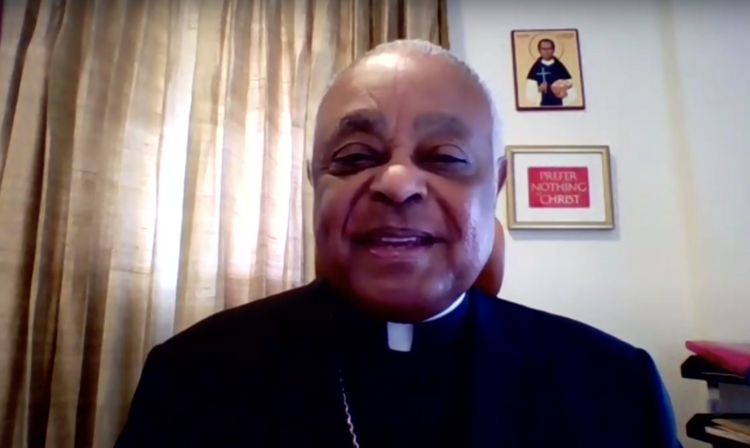 Archbishop Wilton D. Gregory of Washington, D.C. speaks during the panel discussion, "Racism in Our Streets and Structures," organized through Georgetown University. (Screenshot via YouTube)

Archbishop Wilton D. Gregory of Washington, D.C. likened racism to “a virus” that can spread through a society undetected, threatening lives and infecting communities. “We’re very much concerned...with the coronavirus. How did it develop? How is it passed on? Is there a response that will protect us? Those are exactly the same questions that we need to ask about racism,” he said.

These remarks came on June 5 as part of the virtual panel discussion, “Racism in Our Streets and Structures,” organized through Georgetown University’s Initiative on Catholic Social Thought and Public Life.

As nationwide protests rock the United States following the killing of George Floyd in Minneapolis, panelists drew a connection between the devastating impact of coronavirus on African-Americans, who are disproportionately affected by the illness, and the painful legacy of police brutality against African-American citizens.

The archbishop said that watching the murder of George Floyd reminded him of attending, as a child, the public funeral in Chicago for Emmett Till, a black teenager murdered by two white men in Mississippi in 1955. (The men were acquitted by an all-white jury.)

From Georgetown, associate professor of history and African-American studies Marcia Chatelain questioned how much Americans, especially American Catholics, may be willing to pay to dismantle structures that perpetuate racism. She noted that many of the people who were horrified by Georgetown’s selling of slaves in 1838 were not necessarily interested in paying more for tuition as reparations. “We fetishize the idea of social justice…[but] if justice is going to come, it’s going to cost us something,” she said.

Ms. Chatelain views George Floyd’s death not as an isolated incident of police brutality but as an example of how state-approved violence is tolerated in U.S. life. “That knee that was on that man’s neck was weighted by all systems that have sanctioned that behavior, and all of the people who depend on that behavior in order to secure their own personal property as well as their status in society,” she said.

Like the archbishop, Ralph McCloud, the director of the Catholic Campaign for Human Development, had a personal connection to the outcry over the use of excessive force. According to Mr. McCloud, his nephew was paralyzed after being shot in the back while walking away from police. Calling the killing of George Floyd “a déjà vu moment,” Mr. McCloud said that the action of four Minneapolis police officers confirmed “the protection that the system often provides for those persons who abuse folk for no other reason than because of their race.”

Gloria Purvis, co-host of EWTN’s “Morning Glory,” said she will likely never forget the traumatic image of George Floyd crying out for help under the knee of the police officer. “I said, ‘My God, what have we become? Please have mercy on us,’” recalled Ms. Purvis.

She called on Americans to repent of the structural sin of racism and for Catholics to utilize the sacraments, especially the Sacrament of Reconciliation, to atone for the direct practice and tacit acceptance of racism. Drawing a connection between the racial justice movement and the pro-life movement, she advocated for a turning towards “the gospel imperative that we must defend the vulnerable and the oppressed.”

In a surprise appearance, Cardinal Peter Turkson, prefect of the Vatican’s Dicastery for Promoting Integral Human Development, said that racism destroys the brotherhood to which God calls all people. The Book of Genesis, he explained, reminds us of the sacred bond of brotherhood through the story of Cain and Abel. “If we relate Christ’s coming to save humanity with reconciling us to God, then we must quickly tag on to the work of Christ, [which is] healing brotherhood,” the cardinal said.

The church considers racism a social sin and an evil that, in the words of the U.S. Catholic bishops in 1979, “divides the human family, blots out the image of God among specific members of that family and violates the fundamental human dignity of those called to be children of the same Father.”

On June 3, Pope Francis addressed U.S. unrest, decrying racism and criticizing the violent tactics of some protesters. “My friends, we cannot tolerate or turn a blind eye to racism and exclusion in any form and yet claim to defend the sacredness of every human life,” the pope said.