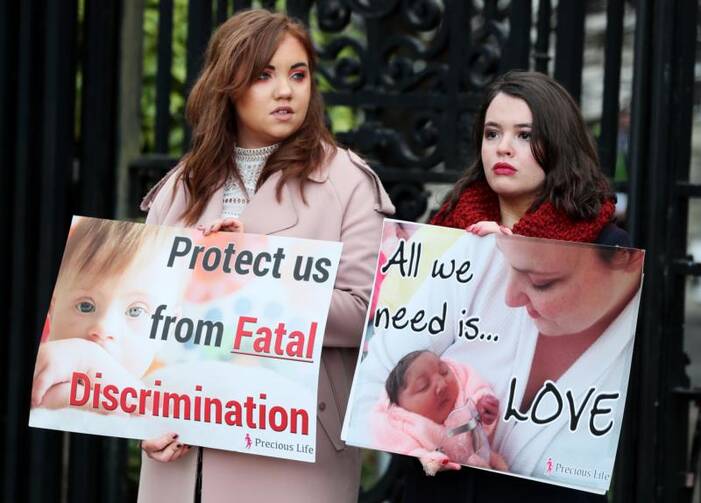 Pro-life supporters are seen in a 2019 file photo holding signs outside the High Court in Belfast, Northern Ireland. On June 2, 2020, politicians in Northern Ireland rejected an "extreme" new abortion law imposed on the province from Parliament in London. (CNS photo/Brian Lawless, Reuters)

Members of Northern Ireland's Legislative Assembly voted 46-40 to oppose a legal framework announced March 25 to permit abortion on demand in the first 12 weeks of pregnancy, abortions up to 24 weeks for undefined mental or physical health reasons, and abortion up to birth if the fetus is considered to be disabled.

The June 2 motion will not change the law directly, but it will put pressure on politicians in London to possibly revisit the legislation before abortion services are commissioned later in the year.

The vote was welcomed by the Catholic Bishops' Conference of England and Wales, which had previously objected to the imposition of abortion on part of the U.K., where a majority of the population and their elected representatives oppose the practice.

"It can't be right that this is going to be imposed by Westminster against the wishes of the people of Northern Ireland and their Assembly," she said in a June 3 statement.

According to Right to Life, a U.K. lobby group, in June the British Parliament must either approve or reject the new abortion framework, and the vote will make it difficult to impose law if the Northern Ireland Assembly has explicitly rejected it.

The group said there would be increased pressure to redraft the guidelines or to scrap them completely and refer the matter back to the Northern Ireland Legislative Assembly, since abortion ordinarily is a devolved issue. The new law was passed at a time when the Assembly was suspended.

The Catholic bishops of Northern Ireland intervened ahead of the vote by writing to every member of the assembly, asking them to oppose the new regulations, which they described as "extreme."

"We regard this to be an unjust law," said the letter signed by the five bishops and published June 1. They said they were eager for dialogue "in an attempt to explore, where possible, how new regulations can be formulated, which express the will of most people in our society to support and protect the lives of mothers and their unborn children."