Despite opposition, abortion is now legal in Northern Ireland 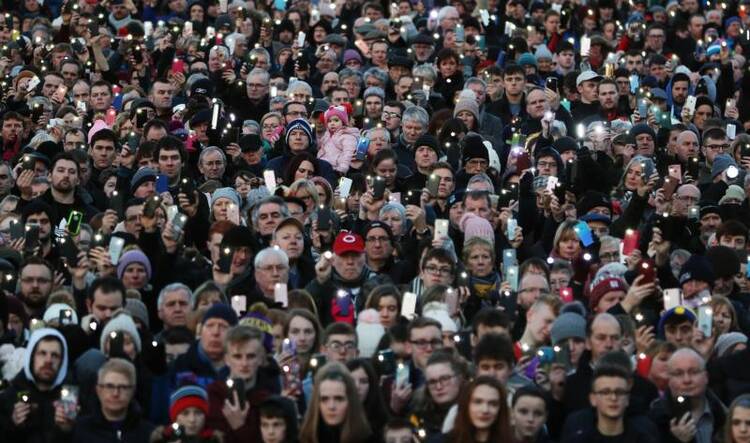 MANCHESTER, England (CNS) -- The British government has pressed ahead with the legalization of abortion in Northern Ireland.

A right of access to abortion was included in the Northern Ireland (Executive Formation) Act 2019, which passed into law last October, and a legal framework for abortion provision was announced March 25.

It allows abortion on demand in the first 12 weeks of pregnancy, abortions up to 24 weeks for undefined mental or physical health reasons, and abortion up to birth if the fetus is considered to be disabled.

The law permits abortions to be performed outside of hospitals and abortion clinics and limits the conscientious objection rights of medical staff. Nurses and midwives are allowed to carry out abortions along with doctors.

The regulations, which were opposed by 79% of respondents during a consultation with the public on how they should be framed, will take effect March 31.

Dawn McAvoy of Both Lives Matter, a pro-life group based in Northern Ireland, said: "The ground is moving beneath us. We are a nation in the midst of a pandemic, grieving for what is to come -- the loss of life, security and the futures we imagined."

"Given this season of grief we face, it seems somewhat fitting that it is now that the new regulatory framework for abortion provision in Northern Ireland has been announced," she said in a March 25 statement.

What is Ireland’s future after repealing its ban on abortion?
Kevin Clarke

"Tragically, too many abortions happen because, sadly, women fear life and choose death," she said. "It is more important than ever before that those of us who recognize and value both lives in every pregnancy offer better than abortion."

She said that pro-life activists would work to offer "the practical, material and emotional services" pregnant women needed "to choose life."

The Right to Life organization called upon the politicians of Northern Ireland, the majority of whom are pro-life, to repeal the "extreme change to the law" at the earliest opportunity.

Until this legislation, Northern Ireland was the only part of the U.K. -- and one of the few places within Europe -- where doctors could be prosecuted for providing abortions.

But politicians in London amended the bill on the governance of the province to introduce both abortion and same-sex marriage there unless self-government was restored within three months.

The deadline was missed, and a new power-sharing agreement between Irish Nationalist and Loyalist factions, which originated from the Good Friday Agreement of 1998, was signed in January -- almost exactly three years after self-government had collapsed.

Simon Caldwell - Catholic News Service
Provide feedback on this article
Join the conversation: Login or create an account
Before you can comment, you need to update your profile to include your first and last name, as required in our comments policy. Then reload this page and you'll be set up for commenting. Update your profile
Show Comments ()
Comments are automatically closed two weeks after an article's initial publication. See our comments policy for more.