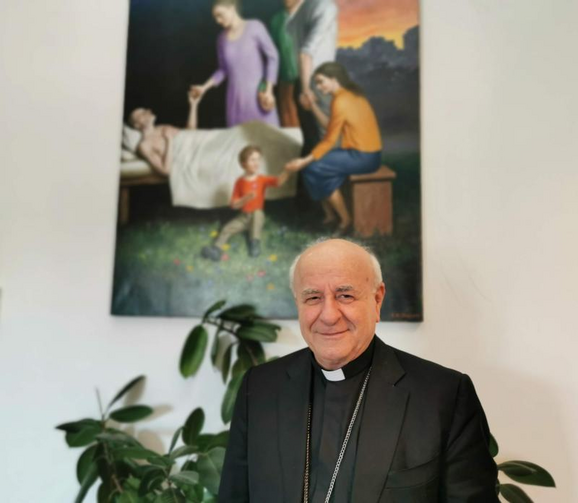 Archbishop Vincenzo Paglia, president of the Pontifical Academy for Life, stands in his office June 1, 2020. Archbishop Paglia said the coronavirus pandemic has forced humanity to confront its own mortality and is an opportunity for Catholics to reflect on death not as an end but as "a passage." (CNS photo/Junno Arocho Esteves)

VATICAN CITY (CNS) -- For Archbishop Vincenzo Paglia, president of the Pontifical Academy for Life, the coronavirus death toll, as well as the way the pandemic forced thousands to spend the last moments of their life alone, has opened the eyes of many to face a subject they usually avoid: death.

Despite humanity's so-called progress in the areas of science and economics, in the "blink of an eye," the coronavirus "brought everything and everyone to its knees" and forced everyone to confront their own mortality, Archbishop Paglia told Catholic News Service June 1.

In late May, the Italian archbishop published an op-ed in the Italian newspaper La Repubblica, calling for a national day of mourning in Italy to commemorate the tens of thousands of people who lost their lives to COVID-19.

The virus, he wrote, "has mercilessly reminded us of our mortal condition."

He also denounced attempts to censor public discussions about death as "signs of a clumsy attempt to remove what objectively appears as the most unbearable feature of our human existence: we are mortal."

In his office, not far from St. Peter's Basilica, the archbishop sat below what he described as a favorite and -- given recent events -- timely, painting. It portrays a man, in his final moments, lying in bed surrounded by loved ones, each holding the other's hand.

Each person represents a different age group or generation, he said, and the sun, which he said, "represented life," shines on the last one, a child.

The portrait stands in stark contrast to how death is explained to children, which he described as "hidden."

"The subject (of death) has been eliminated; it is gone; it has passed," Archbishop Paglia told CNS. "We don't say that a person is dead; we don't talk about death." Instead, people say the deceased has gone away, as if on a trip.

"This concealment, in fact, produces a short circuit because it's not that death doesn't exist; we see it on every news broadcast, every evening, every day," including repeated showings of the video of the death in the United States of George Floyd, he added.

"It's not that death doesn't exist, but it is never talked about because it's about someone else," he said. However, as COVID-19 spread across the world, there was no escaping the reality of death, especially in Italy in the early months of 2020.

As of June 3, an estimated 382,921 had died worldwide, of which 33,530 died in Italy and 108,062 in the United States, according to Worldometer, a statistical site monitoring the pandemic.

The pandemic, Archbishop Paglia said, "lifted the veil" off of humankind's frailty and struck indiscriminately, even against those who "wanted to close their eyes or didn't want to think about it or who were against certain regulations. Take the U.K. Prime Minister (Boris Johnson) for example."

In late March, after weeks of resisting calls to enact lockdown measures in the country, Johnson was among the first world leaders to contract the coronavirus.

"We have seen that frailty strikes us all; there is no position, there is no condition that escapes that innate frailty," Archbishop Paglia explained. "We discovered that we are very fragile and afraid in front of an invisible enemy," and "the only way to avoid it was to isolate ourselves from each other."

Nevertheless, he added, within the tragedy of the COVID-19 pandemic, there also lies an opportunity where people, especially Catholics, can reflect upon death not as an end but as "a passage."

He also said it was important to reflect on the meaning of the line in the Apostles' Creed, which says, "I believe in the resurrection of the body" -- something which many faithful fail to understand.

"It is a part of the Creed that is dry, arid. We lack the thought, we lack the reflection on the destination of life," Archbishop Paglia said. "Where are we going? What meaning does (this line) have? What is the goal? All of this must become a theological reflection, a catechetical reflection and an ordinary dialogue in our life."

In this reflection on death, Catholics have a great role to play and "have the responsibility of facing death with the eyes of God and not the eyes of desperate ones," the archbishop said.

"This a great lesson to learn, not because Christians are not afraid of death. Even Jesus was afraid of death," Archbishop Paglia told CNS. "We can think about (his words in the Garden of Gethsemane), 'Father, take this cup away from me.' Even Jesus wept for his dead friends, like Lazarus."

Jesus, he continued, "even fought against the tragedy of death, he healed many. And above all, Jesus destroyed death. As Christians, we should above all have an attitude of closeness in this time, to be close" especially to the dying.

One of the heart-wrenching aspects of the coronavirus, he said, was that thousands of victims, while accompanied by doctors and nurses seeking to ease their pain, died without their loved ones at their side.

"Loneliness is always awful, but (being alone) at the moment of death is terrible," the archbishop said. "And today, unfortunately, many die alone."

Archbishop Paglia told CNS that if it were up to him, he could "correct the last corporal work of mercy from 'bury the dead' to 'be close to the dying.'"

"It is a work of mercy that should be valued and stressed today," he said. "It means showing hope and knowing how to show it in a language that humankind understands today. This is the challenge."