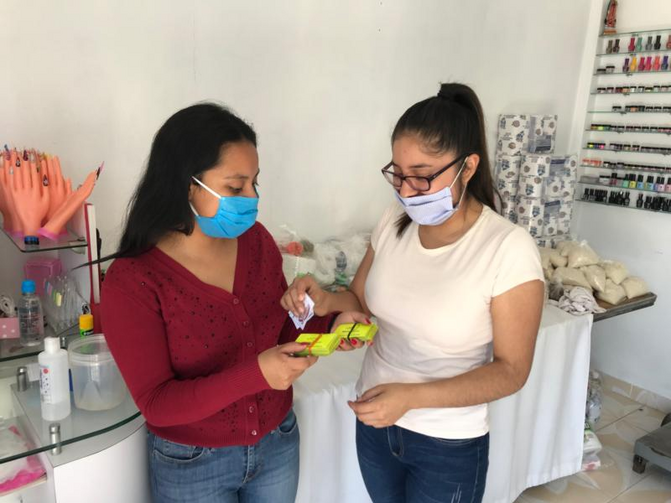 Paola Diaz Hernandez and Daniela Paredes -- volunteers at St. Ignatius of Loyola Parish in Chalco, Mexico -- prepare vouchers for free chickens donated by a local butcher in suburban Mexico City. The pair volunteer with a parish food bank that was initiated during the coronavirus pandemic. (CNS photo/David Agren)

CHALCO, Mexico (CNS) -- Jesuit Father Raul Vazquez always wanted to better include the marginalized barrios alongside a sewage canal, which, centuries earlier, had been named "Canal de la Compania" after the Society of Jesus.

As the COVID-19 crisis crept into Mexico, he inquired about the barrios' needs, but discovered most people there already received some sort of social assistance or political patronage.

The real problem, he discovered, came from the barrios populated by merchants, many of whom sold their wares in itinerant markets and "no longer have a place to sell," Father Vazquez said. Others simply lost their jobs.

"They no longer have anything to maintain their families with," he said from one of the 14 chapels belonging to the St. Ignatius of Loyola Parish, which serves this bedroom community on the southeastern outskirts of Mexico City.

The COVID-19 pandemic has reaped misery on Mexico, where the economy is cratering and the death toll is soaring.

The pandemic is pushing people into poverty and, according to Catholics working in charitable causes, provoking problems like hunger, mental health issues and an upswing in vices such as domestic violence.

"There's a problem of emotional attention," Father Narvaez added. "People are seeing that their families don't have anything to eat."

Lopez Obrador has responded to the crisis with calls for austerity. He's unveiled loans for small businesses of roughly $1,100 and pushed up payments for social programs. He's also spoken of families supporting each other in the pandemic -- as often occurs in Mexican economic crises due to scant state assistance.

Father Narvaez said families were stepping up as always, but noted, "There is a high incidence of family violence, precisely because economic problems have turned into family problems."

The Catholic Church has responded by calling for donations and marshalling support from the private sector to provide care packages. It's also staffed a helpline with priests, psychologists and doctors.

The Jesuits, working with the Mexican bishops' conference, also unveiled a parish-level program called "Neighbor Networks of Solidarity in Parishes." It encourages parishioners to identify and address needs through their own initiatives, rather than depending on outside assistance.

"The biggest success is community organization," said Jesuit Father Jorge Atilano, who based the program on his experiences in rebuilding the social fabric of towns plagued by violence. "It's citizens organizing to mutually support each other, making use of their own resources and strengthening their own abilities to cope with problems."

Father Vazquez saw an opportunity for the program to work in Chalco, where St. John Paul II celebrated Mass for 500,000 in 1990. The population subsequently mushroomed as poor Mexicans flocked to the capital in search of economic opportunities.

It's now served by one of the most understaffed dioceses in Mexico; Father Vazquez's parish serves a population of 64,000 in 12 barrios, where "three families live in each home," he said.

It was tough going at first: Many people saw the coronavirus as a far-off problem or didn't believe it, and calls for quarantine were not taken seriously until "it impacted them directly or a neighbor," Father Vazquez said. "They're now seeing deaths, now seeing family members in the hospital."

Father Vazquez confessed initially thinking, "The pandemic is going to isolate us one from another," but also, "If we're going to get help, it's going to be from the people here."

He went to work in March and started by recruiting barrio delegates, who are municipal government representatives and with whom the parish had a "conflictive" relationship.

Parishioners started a census of the area to identify specific needs. Unable to knock on doors, they spread the word via loudspeakers. They also formed committees for needs such as food banks and listening centers.

In the Tres Marias barrio, the food bank operates 24 hours a day. People drop off items -- bags of beans or rice, bars of soap, packs of noodles -- and volunteers package and deliver care packages to people identified through the census, focusing on the elderly, the sick and people who have lost their jobs.

"It's been a situation in which we've gotten to know each other better," said Daniela Paredes, a nursing student and foodbank volunteer. "Perhaps this is the good part of this situation."

People with other skills stepped forward to help. Ernestina Lopez, an alternative medicine practitioner, started dispensing does of Valerian and passionflower, for managing stress and helping people sleep, she said.

Even the local Alcoholics Anonymous chapter stepped up.

"They're used to listening and we need people who will listen," Father Vazquez said. "People are listening to each other."

The most difficult part has been the deaths, which are mounting, Father Vazquez says.

Families seek him out for funerals, but services aren't being held. None of them acknowledge COVID-19 as the cause of death.

"They don't want to say it," he explained. "They're afraid of being rejected by their neighbors."