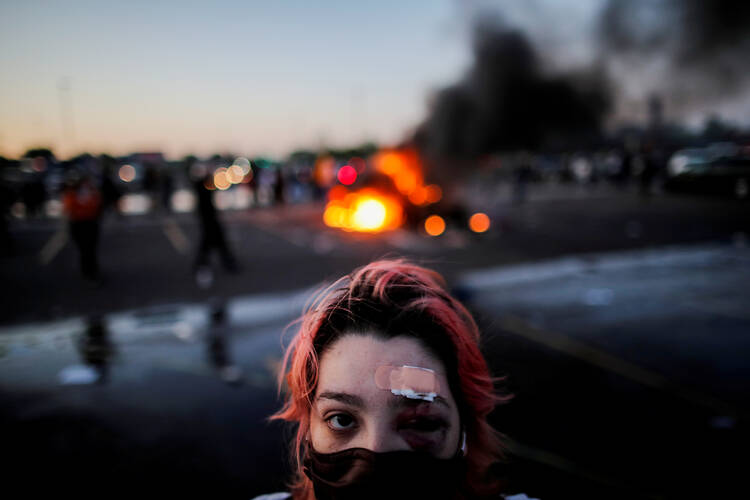 Rachel Perez of Minneapolis is pictured May 28, 2020, with injuries sustained from rubber bullets during protests while standing a distance from a burning vehicle at the parking lot of a Target store. (CNS photo/Carlos Barria, Reuters)

As a national uproar over the death of George Floyd while in police custody in Minneapolis continued, the U.S. Conference of Catholic Bishops acknowledged the anger felt by many Americans who perceive in Mr. Floyd’s death yet another instance of police violence against African Americans. They called racism a “real and present danger,” not a relic of the nation’s past, adding, “We cannot turn a blind eye to these atrocities and yet still try to profess to respect every human life,” the bishops said.

“We serve a God of love, mercy, and justice.”

While praying for peace “across the United States, particularly in Minnesota, while the legal process moves forward,” the bishops said: “We also anticipate a full investigation that results in rightful accountability and actual justice.”

The bishops released the statement on May 29 after days of demonstrations and disturbances in Minneapolis and cities across the country. “We are broken-hearted, sickened, and outraged to watch another video of an African American man being killed before our very eyes,” the chairs of seven U.S.C.C.B. committees said in the joint statement. “What’s more astounding is that this is happening within mere weeks of several other such occurrences. This is the latest wake-up call that needs to be answered by each of us in a spirit of determined conversion.… As members of the Church, we must stand for the more difficult right and just actions instead of the easy wrongs of indifference.”

U.S. bishops: “We cannot turn a blind eye to these atrocities and yet still try to profess to respect every human life,” the bishops said. “We serve a God of love, mercy, and justice.”

The bishops acknowledged the expectation that they “plead for peaceful non-violent protests, and we certainly do.” But, they added, “we also stand in passionate support of communities that are understandably outraged.”

“Too many communities around this country feel their voices are not being heard, their complaints about racist treatment are unheeded,” they said, “and we are not doing enough to point out that this deadly treatment is antithetical to the Gospel of Life.”

The bishops urged more “voices speaking out and seeking healing against the evil of racism in our land.”

Mary Haddad, R.S.M., the president and chief executive officer, Catholic Health Association of the United States, joined U.S. bishops in deploring the killing of Mr. Floyd in a separate statement. “As a Catholic health ministry we affirm that each person is sacred and worthy of our deepest reverence,” Sister Haddad said.

“We are appalled by the recent killings of African Americans by law enforcement officials and vigilantes and acknowledge the deep grief and anger now being expressed,” she added, noting the recent deaths of George Floyd, Ahmaud Arbery, Breonna Taylor and others in similar circumstances that “remind us that racism continues to cast a long shadow across our nation.”

U.S. bishops: “People of good conscience must never turn a blind eye when citizens are being deprived of their human dignity and even their lives.”

“We must respond, not in violence,” Sister Haddad said, “but in a renewed commitment to justice and peace. Let us work in solidarity to end the racism and violence that continues to devastate the health and well-being of too many individuals and communities.”

Reiterating a perspective shared in a recent U.S.C.C.B. pastoral letter against racism, “Open Wide Our Hearts,” the bishops said, for people of color in the United States “some interactions with police can be fraught with fear and even danger.”

“People of good conscience must never turn a blind eye when citizens are being deprived of their human dignity and even their lives,” they said. “Indifference is not an option. As bishops, we unequivocally state that racism is a life issue.”

The bishops said they joined Archbishop Bernard A. Hebda of St. Paul and Minneapolis in “praying for the repose of the soul of Mr. George Floyd and all others who have lost their lives in a similar manner. We plead for an end to the violence in the wake of this tragedy and for the victims of the rioting.”

The bishops asked U.S. Catholics “to pray to the Holy Spirit for the Spirit of Truth to touch the hearts of all in the United States and to come down upon our criminal justice and law enforcement systems.” They urged “each and every Catholic, regardless of their ethnicity, beg God to heal our deeply broken view of each other, as well as our deeply broken society.”