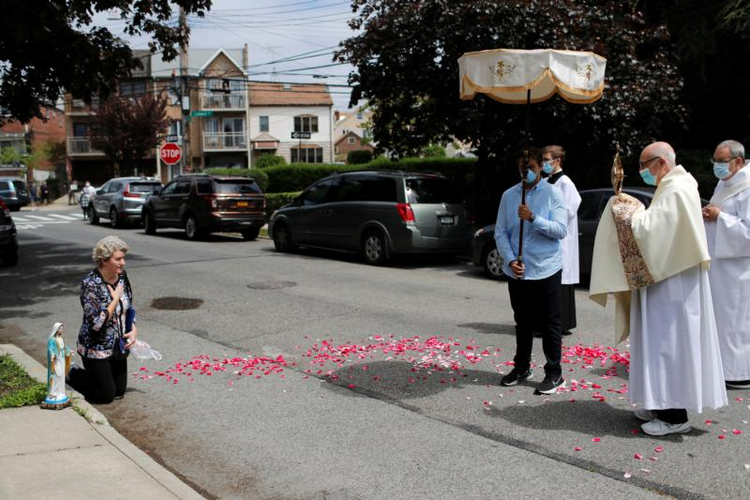 WASHINGTON (CNS) -- The bishops of the state of Washington said suspension of the public celebration of Mass because of the coronavirus pandemic was undertaken "not out of fear, but out of our deepest respect for human life and health."

"As disciples of Jesus, we are called to be instruments of God's protection for the vulnerable and the common good," the five bishops said in a May 22 statement released by the Washington State Catholic Conference. "Our love of God and neighbor is always personal and not partisan.

"While we share the desire to bring people back to Mass as quickly as possible, we will wait to schedule our public worship when it is safe and we are prepared to do so," the statement said.

Washington state was the site of the first widespread outbreak of the COVID-19, the illness caused by the novel coronavirus. Washington Gov. Jay Inslee and public health officials quickly enacted a massive shutdown of the state, including churches, to stem the outbreak.

The bishops' statement came in response to President Donald Trump's May 22 declaration that houses of worship are "essential." He directed the country's governors "to do the right thing and allow these very important essential places of faith to open right now, this weekend."

The president's appeal to the governors came as segments of the U.S. economy began to reopen after weeks of mandatory shutdowns and stay-at-home orders governing the general population.

Trump said he would "override the governors" to ensure that churches would open for worship. He also noted that several governors "have deemed liquor stores and abortion clinics as essential but have left out churches and other houses of worship. It's not right."

While some religious freedom advocates praise Trump's declaration, critics said he could not constitutionally "override" governors' authority on a matter in their own states.

Washington's bishops said they hoped "that our right to responsibly and safely gather for worship will soon be honored so we can collaborate in a manner that respects both our Catholic tradition as well as our civic responsibilities."

"We eagerly await the governor's response to our suggestions on this so we can proceed together with our reopening plans," the statement concluded.

The archdioceses of Baltimore and Los Angeles also issued statements May 22 that explained why churches remained closed for public worship.

Los Angeles Archbishop Jose H. Gomez said in video message that while church buildings remained closed, parishes were open. He stressed that the safety of people was his top concern.

He expressed solidarity with the faithful of the archdiocese, acknowledging the difficulty for people in not being able to celebrate Mass and the sacraments as a community.

"But I think we all have to understand that the reason that we have to do that is because we care for one another," the archbishop said. "The reality of this coronavirus pandemic is that it is a very dangerous illness and the virus is easy to be passed to one another. We didn't know exactly what was the reality and we started seeing the consequences of so many people dying and so many people getting sick, so that's why we had to be extremely careful in taking care of one another."

He said the number of COVID-19 cases continued to climb in Los Angeles County, but that the number of illnesses in Ventura and Santa Barbara counties, which also are part of the archdiocese, were not as high. "But it is still a very contagious illness," he said.

The Archdiocese of Baltimore reiterated that it has undertaken plans to reopen parishes for public Mass for the weekend of May 30-31 in jurisdictions that are allowing religious gatherings of more than 10 people and parishes are able to implement the necessary precautions to mitigate the risk of transmission of the coronavirus.

"The guidance is informed by church doctrine, expert medical advice and federal, state and local recommendations for maintaining public safety and prevention community contagion of the COVID-19 virus," the statement said.

The archdiocese also expressed gratitude to government leaders "who have consulted the advice of the religious community" to respect religious freedoms while ensuring the safety of worshippers and the wider community.

Making decisions amid "these unchartered challenges," the statement continued, requires that religious and personal freedom must be balanced with the need for economic stability and the pandemic's impact on the physical, mental and social health of local communities.

The archdiocese said it would "continue to give first priority to the protection of the sacredness of life as we strive to minister to the spiritual needs of the faithful."

Trump's May 22 announcement came less than a week after the Department of Justice challenged the "unequal treatment of faith communities" in California's coronavirus reopening plan, warning that continued restrictions on worship services threaten believers' civil rights to practice their religion.

"Simply put, there is no pandemic exception to the U.S. Constitution and its Bill of Rights," said Assistant Attorney General Eric Dreiband in a three-page letter sent to California Gov. Gavin Newsom May 19. Dreiband is in the Justice Department's Civil Rights Division.

Elsewhere, Minnesota's Catholic bishops and Lutheran officials said they were moving ahead with plans to resume liturgies at 30% capacity May 26, despite the Gov. Tim Walz's executive order capping faith-based gatherings at 10 people due to the pandemic.

But after two days of meetings with Catholic and Lutheran leaders, Walz May 23 announced a new executive order permitting faith-based gatherings at 25% church capacity, with a total limit of 250 people, beginning May 27. The Minnesota governor announced the new order May 23.

In response, Archbishop Bernard A. Hebda of St. Paul and Minneapolis and the state's other Catholic bishops said they find the new guidance reasonable and so have modified their plans to align with the 25% of capacity now allowed. In addition to slightly lowering capacity limits, they also were waiting to resume public worship May 27 instead of May 26, as they initially planned.

The faith leaders had pushed Walz to allow bigger crowd capacity for worship services as an "urgent need." In past weeks, Minnesota restaurants, bars, malls, retail stores, salons and tattoo parlors had been green-lighted to reopen with certain restrictions.

1
Pope Francis to parents of L.G.B.T. children: ‘God loves your children as they are.’
Gerard O’Connell
2
I grew up in a charismatic group like Amy Barrett. Here’s why they are a good thing.
Nathan W. O'Halloran, S.J.
3
I helped write the bishops’ first document on Catholics and voting. Here’s why I’m voting Biden, not Trump.
John Carr
4
America magazine: Donald Trump is a unique threat to the Constitution
The Editors
5
What the story of Galileo gets wrong about the church and science
Guy Consolmagno, Christopher M. Graney