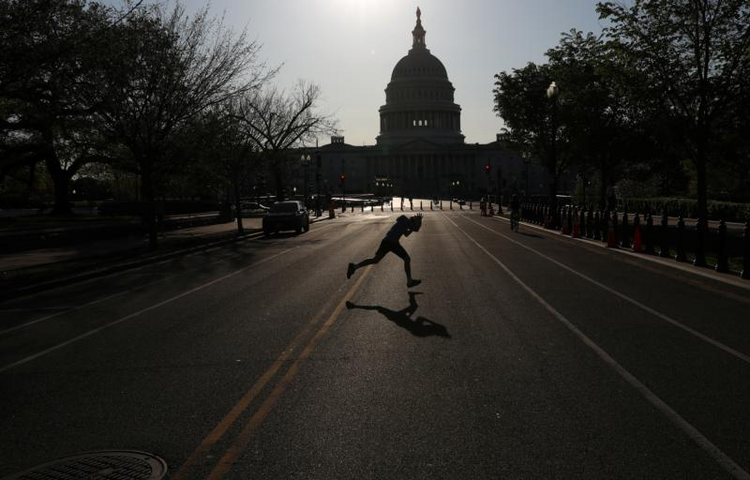 A child in Washington runs near the U.S. Capitol April 6, 2020, during the coronavirus pandemic. Catholic leaders May 15, 2020, expressed deep reservations about a new $3 trillion tax cut and spending bill to help the economy because it would restrict support for Catholic school students. The measure was up for a vote in the House May 15. (CNS photo/Leah Millis, Reuters)

CLEVELAND (CNS) -- Catholic leaders expressed deep reservations about a new $3 trillion tax cut and spending bill in response to the economic fallout caused by the coronavirus pandemic that would restrict support for Catholic school students.

Unveiled May 12 by House Speaker Nancy Pelosi, D-California, the Health and Economic Recovery Omnibus Emergency Solutions Act, or HEROES Act, includes a provision that would rescind funding of equitable services to nonpublic schools, including Catholic schools, that had been established in the CARES Act, an earlier $2.2 trillion emergency aid package.

Other provisions in the Democrats' bill that has rocked the country's private education sector include the lack of direct assistance to families for tuition expenses or tax incentives that can be used for tuition; a measure that cuts out nonpublic schools, except in limited cases for children with disabilities, from $90 billion in school aid; and it rescinds a discretionary fund utilized by the secretary of education established under the bipartisan CARES Act.

Disallowing emergency aid to one part of an affected community and allowing it for another runs contrary to long-held social policy, Catholic education advocates said.

Within days of learning of the bill's content related to nonpublic schools, Bishop David M. O'Connell of Trenton, New Jersey, urged Catholics in the diocese in a post on the website of The Monitor, the diocesan newspaper, to contact members of Congress to express their concern about the legislation.

Saying the bill has "a lot of good things," he cautioned that "some real problematic areas" exist.

"We're trying to urge Congress to maintain equitable access to federal funding for nonpublic schools and their (students') families as they have in previous legislation," Bishop O'Connell told Catholic News Service May 15.

In the first 24 hours after the post, the bishop said, more than 7,000 messages were sent to Congress, including 5,200 from the Trenton Diocese.

"We just want to make sure that as we face the economic difficulties we're all facing, that those who have children in nonpublic or Catholic schools have the equal opportunity to provide what the government offers us. We want to make sure we get our fair share."

Urged on by the U.S. Conference of Catholic Bishops, state Catholic conferences have mobilized as well around the bill as well to stop what education advocates consider a major step back from long-established federal policies.

"The key thing to this bill is not that it is an education bill, it's an emergency relief bill. When in history have we excluded those suffering from an emergency from federal relief?" said Jennifer Daniels, associate director for public policy in the Secretariat of Catholic Education at the U.S. Conference of Catholic Bishops.

"When Congress releases emergency relief bills, it's available to everyone who is suffering form that emergency. All we're saying is that private schools are suffering right next to the public schools, and we should have access to emergency relief funds. All we want is our fair share and for our children to be served in an equal manner, Daniels told CNS.

The private education sector has rallied to oppose the provision specific to school funding.

A May 14 letter to Congress from Michael Schuttloffel, executive director of the Council for American Private Education, expressed "extreme disappointment" with the "unworkable" education provisions in the Heroes Act.

The USCCB is a member of the council, which is known as CAPE.

"If passed, these provisions would eliminate from eligibility for aid almost all students enrolled by their parents in private schools," Schuttloffel wrote, adding, "To approve such policies would be to send a message that the House of Representatives is only concerned with the safety of some of America's students and teachers, not all."

The letter raised concern that the HEROES Act education provisions reopens the CARES Act "to restrict which private school students will be eligible for relief voted on by Congress, and signed by the president, over a month ago."

Presentation Sister Dale McDonald, director of public policy and educational research at the National Catholic Educational Association, said the bill as written would harm nonpublic schools across the country because it "reinterprets" what is emergency aid versus what is traditional education aid.

State Catholic conferences across the country have been alerted to the bill's measures. The conferences have joined a nationwide effort to make sure the provisions are dropped from any final bill.

The bill includes $1 trillion for state, city and tribal governments to avoid layoffs; $200 billion for "hazard pay" for front-line workers; a new round of cash payments for individuals and households; $175 billion in housing assistance for rent and mortgage payments; $75 billion for medical testing; a 15% increase in the Supplemental Nutrition Assistance Program; subsidies for laid-off workers to pay for health insurance premiums and maintain COBRA; an employee retention tax credit for businesses; and $25 billion for the U.S. Postal Service.

The House of Representatives passed the bill May 15 largely along party lines.

However, the likelihood of the Republican-controlled Senate taking up the measure as written is slim. Senate Majority Leader Mitch McConnell, R-Kentucky, told reporters at the Capitol there was no "urgency" to act and that consideration of any relief measure by the chamber would not happen until after Memorial Day.

The long-standing equitable services policy has existed since 1965 with passage of various civil rights laws under President Lyndon Johnson's Great Society campaign. It allows federal funding to be sent to states, which then funnels money to local school districts. In turn, the local districts provide equitable services such as English language training or special education based on the needs of the private school.