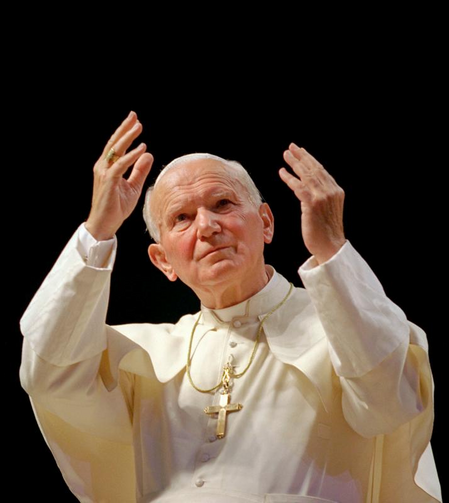 Pope John Paul II gestures to the crowd during World Youth Day in Denver in 1993. Msgr. Slawomir Oder, postulator for the sainthood cause of Pope John Paul II, said he and the commission involved in investigating the life of the late pope for sainthood found no evidence the pope knowingly neglected or covered up abuse scandals. (CNS photo/Joe Rimkus Jr.)

ROME (CNS) -- The postulator and the commission involved in investigating the life of Pope John Paul II for sainthood cause found no evidence that the pope knowingly neglected or covered up abuse scandals, the postulator said.

Msgr. Slawomir Oder, the promoter of the cause, told reporters in Rome during an online meeting May 15 that he and investigators saw nothing "that could possibly be claimed as (being) a shadow of guilt in regard to John Paul II."

However, Msgr. Oder also explained that the investigators did not have direct access to the relevant Vatican archives but had to send the topics they wanted to explore and questions to the Secretariat of State.

The Polish monsignor had been asked whether it would have been better to have been more careful or to have waited longer before beginning the pope's sainthood cause given what has come to light concerning past abuses by the late Marcial Maciel Degollado, founder of the Legionaries of Christ, and former-Cardinal Theodore E. McCarrick.

Msgr. Oder told the reporter that during the sainthood process "all questions were faced, even the ones you are talking about" related to abuse.

"Extensive research was carried out in the Vatican archives," he said, speaking in Italian.

The historical commission, which is part of the tribunal that hears from witnesses and examines documents and facts about the sainthood candidate's life, is in charge of investigating different subjects and accessing archives directly, he said.

However, the Vatican archives they needed to access were -- and still are -- closed, he said. Materials related to each pontificate are restricted, with access usually granted only 75 years after the end of the pontificate.

John Paul II and his path to sainthood
Joseph McAuley

It was possible, instead, "to draw up questions pertinent to the subject" of abuse and then the "research of the documents was carried out by people authorized by the Secretariat of State, experts," he said.

Those heading the Secretariat of State during the diocesan phase of investigation, which began in 2005 and ended in 2007, were Cardinal Angelo Sodano, followed by Cardinal Tarcisio Bertone. A panel of reviewers at the Congregation for Saints' Causes voted unanimously in 2009 that Pope John Paul had lived a life of heroic Christian virtue.

Msgr. Oder said he, the historical commission and the episcopal commission did everything they were responsible for doing when it came to covering the necessary topics and asking pertinent questions.

"Surely it is a phenomenon (in which there) will still be more to study for a long time," he said, "There will be documents made available, etc. etc."

But as regard to what he and the commission knew then, "I can say that we did everything, and we found nothing that could in some way hinder the path of the cause of John Paul II."

Later, when he was asked specifically if St. John Paul covered up for "the pedophile, Maciel," Msgr. Oder said, "No. John Paul II did not cover up any pedophile. If he had known that he had been a pedophile, he certainly would not have adopted any kind of attitude (or behavior) that could have been interpreted as a cover-up or something else."

He told reporters to remember what the Polish pope had experienced under communism, which was extremely hostile to the church. It was a common tactic of the communist regime to circulate false accusations against clergy as part of discrediting the church.

False accusations, Msgr. Oder said, "were a weapon of the church's enemies," which is why he believes, from the late-pope's point of view, if the accusation had not been proven, there was always a margin of doubt that it could be yet another form of "manipulation."