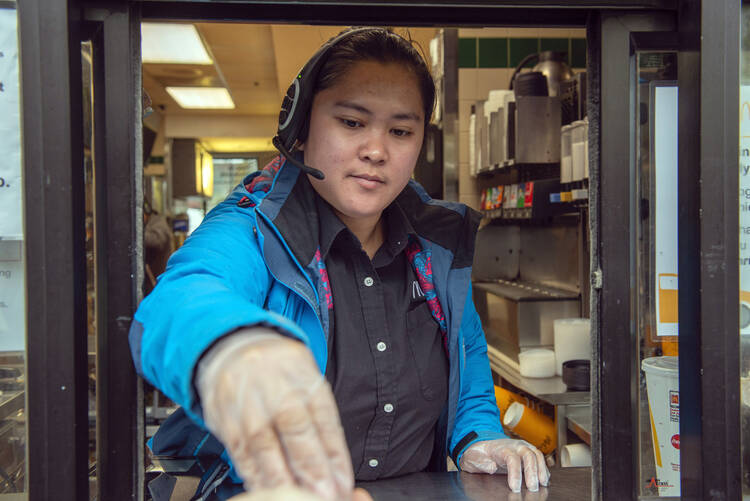 Milagrose Sarmiento works the drive-through window at a McDonald’s restaurant in Sitka, Alaska, on April 24. Low-paid workers such as restaurant employees are proving their value during the coronavirus pandemic. (James Poulson/The Daily Sitka Sentinel via AP)

Even as the coronavirus pandemic disrupts millions of jobs, it is drawing attention to the essential roles of many low-paid workers, including grocery clerks, restaurant servers, nursing aides and transit drivers. Traditionally, the pay for such jobs is determined by “replacement value” (that is, how much it would cost to replace a worker), but the pandemic has shown that their societal value, in many cases, is much higher. Societal value is more subjective, and even higher-paid workers and executives are now recognizing that a well-functioning society really needs people to provide these services.

Traditionally, the pay for such jobs is determined by “replacement value” (how much it would cost to replace a worker), but the pandemic has shown that their societal value is much higher.

Key features of the legislative responses to the pandemic, including the CARES Act, acknowledge this, in contrast to the economic stimulus laws passed during the Great Recession that began in 2007. The legislation of 2008-09 committed hundreds of billions of federal dollars to rescue corporations, in some cases just to preserve an iconic corporate name. Banks were infused with dollars through the Tarnished Asset Repurchase Plan. The nearly bankrupt car manufacturers General Motors and Chrysler, and tottering mortgage backers Freddie Mae and Freddie Mac, were taken over by the federal government. And the giant insurer American International Group received a $182 billion two-year loan from the Federal Reserve (an investment that eventually reaped a $23 billion profit for taxpayers).

Workers who still had their jobs benefited from spending incentives like the Cash for Clunkers program, which encouraged the purchases of new cars, and a temporary payroll tax holiday that boosted take-home pay for many. But layoffs rolled through the economy, and the unemployment rate did not peak until 2010. Careers were derailed. Legions of executives became consultants, joining the gig economy. Retirement accounts were drained. Millions of families lost their homes. Many businesses closed forever, and others lost momentum as a scramble for survival replaced plans for growth.

The CARES Act aims at avoiding that career displacement, as well as the loss of the cohesion and synergy that benefits owners, workers and customers. Title II of the law is appropriately named Assistance for American Workers, Families and Businesses. Loans are available to businesses and nonprofits with up to 500 employees, and the loans can be forgiven if workers are kept on the payroll. That provision encourages businesses to keep their workforces intact, ready to reopen after the emergency and return to “normal” without the need to recruit and train new employees. Workers’ lives are stabilized and morale is maintained, teams are preserved, progress is quickly resumed, and customers are better served.

The CARES Act encourages businesses to keep their workforces intact, ready to reopen after the emergency and return to “normal.”

This is part of our nation’s recognition of the irreplaceable role that stable private-sector employment plays in our communities, in the lives of families and, as Pope Francis acknowledged in “Evangelii Gaudium,” in “serv[ing] the common good by striving to increase the goods of this world and to make them more accessible to all” (No. 203). For cases where businesses are too fragile to survive even with such aid, the CARES Act also boosts unemployment benefits by $600 per week (at least in states that elect this option) so that those who are unemployed can keep their homes, pay their bills, stay in the communities they know and avoid the agony of searching for work while businesses are shuttered against the virus. Finally, most households qualify for a $1,200 economic stimulus payment ($2,400 for joint returns), plus $500 per child.

There were signs that our nation’s social values were changing even before Covid-19 appeared. Bank of America and other large companies were already raising the pay for their lowest-paid employees to $20 per hour—one-third higher than the goal of many labor advocates—at a pace that exceeds the general inflation rate. These jobs require no college degree, just a few days of on-site training. Many of these companies have also increased benefits like subsidies for health insurance plans, paid parental leave, 401(k) plan contributions, paid sick leave, short-term disability plans and discounted mortgage rates. These improvements will inevitably affect the pay and benefits of most or all low-wage workers. No doubt, the pressures of finding employees during a period of full employment, which prevailed until the Covid-19 shutdowns, helped motivate such moves. The CARES Act, by encouraging continued employment, helps assure the continuity of this progress.

Without the philanthropy of billionaires, the poor would suffer more and for longer
Joseph J. Dunn

Other signs have pointed to major changes in the employment of low-wage workers. Last August, 181 chief executives of U.S. firms signed the Business Roundtable’s update of its Principles of Corporate Governance, which dropped the group’s longtime principle that “corporations exist principally to serve shareholders” and stated instead that corporations should promote “an economy that serves all Americans”—an acknowledgment of the broader social role of business.

Recognizing societal value does not slow the automation of some jobs or stop the “creative destruction” that occurs when an innovative technology or product replaces an established one. There will continue to be wage premiums for higher levels of education. But societal value acknowledges that some jobs must be done by humans, and however humble that work, it has dignity. These workers deserve a decent living.

Other problems remain. The pandemic will inform the discussion of universal health coverage and increase the pressure to update our nation’s immigration laws.

But the past decade has shown the wage-raising power of a full economy that is growing with innovation. The pandemic has increased public awareness of the plight of low-paid workers and has highlighted the societal value of every job. Our economic stimulus laws now reflect those societal values, for the benefit of all.

Joseph J. Dunn is the author of After One Hundred Years: Corporate Profits, Wealth, and American Society. He is a retired business executive and writes frequently on issues of economic justice.