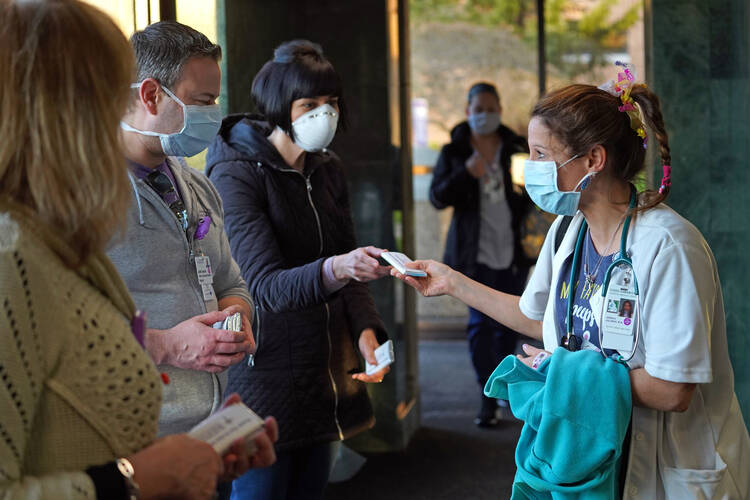 As lawmakers consider additional funding in response to the economic fallout from the coronavirus pandemic, including a new bill that reports say would include about $75 million in emergency funding for hospitals, the organization representing hundreds of Catholic hospitals says the nation’s health care institutions need more help from the federal government, as increased costs for supplies and a dramatic dropoff in revenue strain already-tight hospital budgets.

“Some of our individual hospitals are experiencing losses upwards of $1 million to $2 million [per] day, while some of our health systems are reporting revenue losses in the range of $200-$600 million per month,” Mary Haddad, R.S.M., president and chief executive officer of the Catholic Health Association of the United States, said in a statement released on April 20.

While emergency departments and intensive care units in hospitals located in places hit hard by Covid-19 are working at capacity or beyond, in other parts of the country medical centers have largely cleared out, with elective surgeries postponed, clinical appointments canceled and emergency departments experiencing reduced patient volume as people follow stay-at-home orders. That means hospitals are seeing dramatic drops in revenue, and so far, at least 150 hospitals have reduced staffing levels, according to Becker’s Healthcare. Catholic hospitals are no exception.

“The one thing that this pandemic exposed was how fragile our health care system is.”

In New Mexico, Christus St. Vincent Regional Medical Center furloughed 300 employees for at least three months. Mount Carmel Health System in Ohio furloughed at least 500 workers, and Trinity Health in Michigan said it would furlough about 2,500 nonclinical staff, or about 10 percent of its staff, at eight hospitals throughout Michigan, as it contends with a more than 50 percent drop in revenue.

At Catholic Medical Center in Manchester, N.H., the economic toll of Covid-19 has been hard and fast. Hundreds of doctors, nurses and other hospital staff have been furloughed, have seen a reduction in work hours or are working on an as-needed basis.

With elective surgeries postponed, the majority of Catholic Medical Center’s 300 beds now sit empty most days. In March alone, the hospital saw a decline in revenue of more than $11 million, a blow that is expected to total $60 million to $70 million by the end of June, according to Dr. Joseph Pepe, the hospital’s chief executive officer.

“The one thing that this pandemic exposed was how fragile our health care system is,” Dr. Pepe told America. Like other hospitals, Catholic Medical Center spent money procuring additional ventilators and personal protective equipment, which he said cost nearly 10 times more than before the pandemic. “We didn’t know whether we were going to be hit with a Category 5 hurricane or a Category 2 hurricane, so we were preparing for a Category 5, trying to buy as much as possible,” he said.

C.H.A. President and C.E.O. Mary Haddad, R.S.M.: “Some of our hospitals are experiencing losses upwards of $1 million to $2 million per day.”

Dr. Pepe said the hospital has taken steps to bolster its finances, including delaying payments to vendors, seeking government aid and renegotiating contracts. And with most of Catholic Medical Center’s patients on Medicare or Medicaid, the large financial hit will be difficult for the hospital to absorb. Without additional government funds, services to the most vulnerable could be jeopardized, Dr. Pepe said, such as outreach services to people who are homeless, refugees and those with substance abuse issues.

OSF Healthcare is a network of 14 hospitals in Illinois and Michigan. One of its locations, OSF Little Company of Mary Medical Center, located just outside Chicago, has treated many patients with Covid-19. Like Catholic Medical Center, OSF Healthcare has had to pay up to 10 times the normal cost for personal protective equipment, which the front-line staff is using at a higher rate than before. There are also costs associated with creating special rooms to house patients suffering from Covid-19. And while the network says costs associated with Covid-19 will be in the tens of millions, the loss of revenue from canceled appointments and procedures will dwarf those expenses.

OSF Healthcare chief financial officer Michael Allen told America that patient volume in the rest of the system is way down. He said that the number of patients being treated in the system’s clinics is down about 75 percent, elective surgeries are down as much as 80 percent, and in hospitals where Covid-19 is not as prevalent, visits to the emergency department have been cut in half. That translates into a projected loss of more than $100 million in April alone.

“This is devastating to the health care industry and without support many hospitals will end up going out of business.”

For some hospitals, not getting additional government support could be dire, he said.

“If you’re a smaller and less equipped and less provisioned health care system or hospital, what’s at risk is probably whether you can stay open or not, whether you will even survive this period of time,” Mr. Allen said. “For us, it’s not a question of staying in business or not staying in business. We will be here for our communities. But it could slow down in how we are able to invest in our communities going forward.”

Last month, Congress passed the $2 trillion Coronavirus Aid, Relief, and Economic Security Act, which includes $100 billion set aside for hospitals. The money can be used to cover costs associated with increased staffing, the procurement of personal protective equipment, lost revenue and other expenses related to Covid-19, according to the American Medical Association.

Earlier this month, the Department of Health and Human Services dispersed $30 billion to hospitals based on Medicare reimbursement rates. The Catholic Health Association’s Sister Haddad said it is “critically important” for H.H.S. to “immediately expedite” the next round of money. And she called on Congress and the White House to do more for struggling hospitals.

“While releasing this funding is an important step, there continues to be a critical need for additional financial support to ensure hospitals can survive the financial pressures they are facing,” she said. “We urge Congress and the White House to work together to secure additional direct financial support to keep hospitals operating and able to meet the health care needs of our communities.”