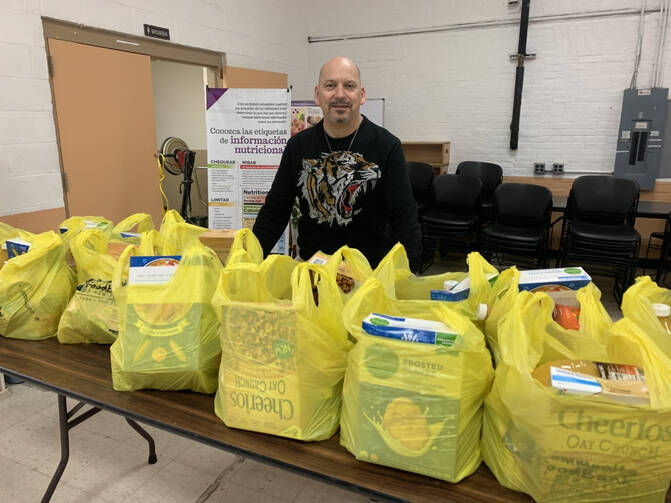 With new unemployment claims totaling almost 10 million over two weeks and some economists warning that the unemployment rate during the coronavirus pandemic could go higher than it did during the Great Depression, Catholic Charities agencies across the United States are preparing for a flood of new clients requesting help with food, rent and utility bills. Catholic Charities leaders say that while the government relief package signed into law on March 27 by President Trump will help meet some of the initial need, much more action is needed for charities to be able to meet the expected demand.

“We’re glad that the CARES Act gave us many things, but also there’s room to improve,” Brian Corbin, an executive vice president at Catholic Charities USA, said in an interview on April 2 with America. The package represents the third stimulus effort passed by Congress since the coronavirus outbreak began, and lawmakers are already discussing what further steps to take.

Nonprofit organizations are eligible for assistance as part of the $2 trillion stimulus package enacted last week, which includes direct payments of up to $1,200 to many Americans, cash infusions for beleaguered industries and loans for small businesses, including some charities.

Businesses and nonprofits with fewer than 500 workers will be able to apply for some of the $350 billion set aside for Small Business Administration loans, called the Paycheck Protection Program, to help meet expenses and payroll as income and revenue are expected to fall over the next few months. If employers meet certain provisions, including not laying off workers for the next two months, they could apply to the government for loan forgiveness.

Businesses and nonprofits with fewer than 500 workers will be able to apply for some of the $350 billion set aside for Small Business Administration loans, called the Paycheck Protection Program.

“We want to remove that cap,” Mr. Corbin said.

Aimed at addressing concerns like Mr. Corbin’s, a bipartisan bill has been introduced in Congress that would set aside $60 billion to support nonprofit agencies, remove the 500-employee cap from the Paycheck Protection Program and enact a universal charitable-giving tax deduction to encourage more Americans to donate to programs like Catholic Charities.

“With millions of jobs and invaluable services at risk, the SOS America Act would ensure that nonprofits are not left behind in disaster relief legislation,” reads a press release from two of the bill’s sponsors, Rep. Seth Moulton, a Democrat from Massachusetts, and Rep. Brian Fitzpatrick, a Republican from Pennsylvania.

Charitable giving has declined since the passage of a 2017 law that increased the standard income-tax deduction for families to $24,000, effectively removing incentives for many Americans to donate to charities. Republicans and Democrats have since been seeking ways to broaden charitable-giving tax deductions.

In Michigan, Catholic Charities created a drive-through food pantry and is delivering groceries to people who cannot leave their homes. There are also plans to distribute Easter baskets at the drive-through on Easter Sunday. Volunteers distributed hygiene kits to families in need in Kansas. And in Washington, Catholic Charities is asking for donations of grocery store gift cards to respond to an 80 percent increase in requests for assistance from the agency.

But local agencies are not immune to the bigger challenges already facing many U.S. businesses and nonprofits. Like other essential workers interacting with the public during the crisis, employees at many Catholic Charities agencies are in need of masks and gloves.

“We’re begging, borrowing, taking, urging, coordinating, helping,” Mr. Corbin said when asked how local agencies were securing personal protective gear. “We are right now in a massive flow of trying to get that.”

In places already hard-hit by the coronavirus, there are other challenges for local Catholic Charities agencies.

Catholic Charities of Eastern Washington last week laid off 41 workers, though the agency said an anonymous donor was helping to provide financial support to affected workers and that it hoped to hire them back at some point. Most of the workers were employed at a child-care center whose enrollment has dropped since the outbreak began.

“We’re begging, borrowing, taking, urging, coordinating, helping,” Mr. Corbin of Catholic Charities USA said when asked how local agencies were securing personal protective gear. “We are right now in a massive flow of trying to get that.”

Another way to help Americans affected by the crisis, Mr. Corbin said, would be another infusion of funds into the Emergency Food and Shelter National Board Program. The Federal Emergency Management Administration administers the program, which sends funds to local charities that then distribute the money to help people with basic necessities like food and rent.

Catholic Charities USA and a number of other large nonprofits, including the American Red Cross, the Jewish Federations of North America and the United Way, partner with the program to help distribute the funds. In the most recently passed bill, the fund was given an emergency $200 million allocation, but partnering organizations expect they will need more to meet the increased demand.

Though much uncertainty remains about the economic fallout of the pandemic, Mr. Corbin said Catholic Charities, along with other nonprofit organizations, are continuing their work while pushing the federal government to protect the roughly 12 million Americans who work in the nonprofit sector and the many millions more who rely on nonprofits for assistance with securing food, paying rent and gaining access to healthcare.

“Everyone’s just kind of watching and knowing they have to all be ready,” Mr. Corbin said. Asked if he was optimistic that lawmakers would respond to pleas from nonprofit leaders for more assistance, he said, “We’re always hopeful.”