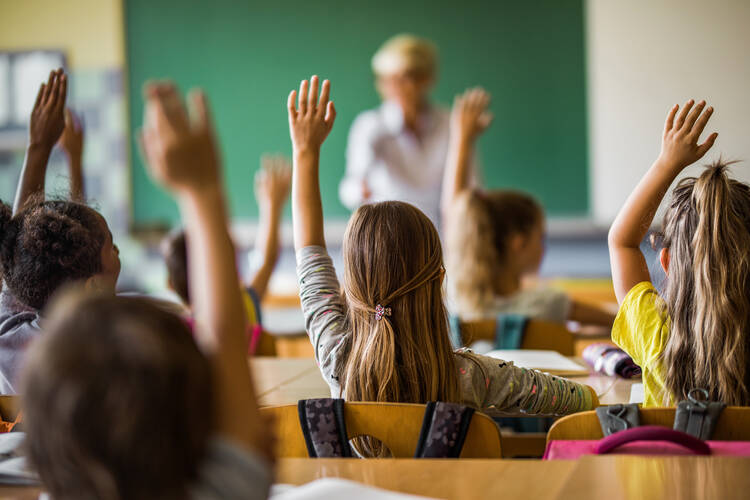 Since the 1990s, homelessness in the city has surged, reaching “the highest levels since the Great Depression of the 1930s,” according to New York’s Coalition for the Homeless. (iStock)

“The number of school-age children in New York City who live in shelters or ‘doubled up’ in apartments with family or friends has swelled by 70 percent over the past decade,” wrote Ms. Shapiro, calling this phenomenon “a crisis without precedent in the city’s history.”

Since the 1990s, homelessness in the city has surged, reaching “the highest levels since the Great Depression of the 1930s,” according to New York’s Coalition for the Homeless. In September, the homeless population in the city was 62,391 persons, while city shelters housed a total of 133,284 homeless people, including children, during the 2018 fiscal year. Last October, The Times reported that the population of homeless students in the city was greater than the entire population of the city of Albany.

Parochial schools in the city are not immune to this crisis, Michael J. Deegan, the superintendent of schools for the Archdiocese of New York, confirmed.

“We do have some families that are homeless, and in partnering with Catholic Charities of New York, we work with the families in trying to find accommodations for them,” Mr. Deegan said. “But, to be frank with you, our greater challenge is not simply the homeless but the unsheltered,” his term for students who do not have a permanent, reliable place to call home but may be in temporary housing or doubled up with family.

“We do have some families that are homeless, and in partnering with Catholic Charities of New York, we work with the families in trying to find accommodations for them.”

Mr. Deegan estimates that as much as 10 percent of the families sending their kids to Catholic schools in the archdiocese “struggle to find permanent housing and find themselves in less than optimal living conditions.” To support this population, he said, archdiocesan schools maintain free lunch and breakfast programs and provide counseling services to children, while also partnering with Catholic Charities of New York to secure permanent housing.

Msgr. Kevin Sullivan, the executive director of Catholic Charities of New York, said the organization currently owns around 500 housing units and plans to add some 500 more by next year.

Student homelessness is also evident in the Diocese of Brooklyn, which encompasses the boroughs of Brooklyn and Queens. “As you can imagine, there are areas throughout our diocese where students are homeless, [attending] our schools through the support of donations made to the Futures in Education fund, and [students] are provided both breakfast and lunch,” wrote John Quaglione, the deputy press secretary for the Diocese of Brooklyn, in an email to America.

Mr. Quaglione said East Flatbush, Brooklyn, and Corona, Queens, were among the diocesan communities most affected by homelessness. “We also work with the Catholic Charities of Brooklyn and Queens to assist the homeless students and families who are enrolled in our school,” he said.

Will affordable housing be a major topic in the 2020 campaign? It should.
The Editors

While the reality of over 114,000 homeless students in the city may be shocking to many, Nancy Downing, C.N.D., was not surprised by the figure.

“We’ve seen the number of homeless families increasing over the last few years,” she said. Sister Downing is the executive director of Covenant House New York, where she has worked for 12 years.

“There is a significant lack of affordable housing in the New York area. Families are being driven out; even those that are gainfully employed with respectable jobs are unable to afford the rent their community.”

“Currently, on a nightly basis, we have about 270 young people who stay with us,” she said. As a Catholic nonprofit organization, Covenant House takes an individual approach in their care, aiming to “address the whole person,” in the words of Sister Downing.

She summarizes their philosophy: “Looking at what each person needs for them to become successful and to use the gifts that they have in a way that’s going to help support them and have them live in a stable, safe environment.”

After years of economic disruption in the aftermath of the Great Recession, low-wage earners in New York have begun to experience some modest gains. Retail employees enjoyed a 5 percent increase in earnings, but those minor wage improvements have not stemmed the homelessness crisis in New York.

“There is a significant lack of affordable housing in the New York area,” said Mr. Deegan. “Families are being driven out; even those that are gainfully employed with respectable jobs are unable to afford the rent their community.”

“It’s no secret at all that those who are working-class New Yorkers are being squeezed by the high cost of living in New York City,” Monsignor Sullivan said.

Confronted with the rise of homeless in the city, the public is not powerless. Sister Downing promotes volunteerism and greater awareness of the issue to combat its effects.

In May 2018, The New York Times called the disappearance of affordable housing in the city a “crisis,” one propelled by landlords “pushing out rent-regulating tenants and catapulting apartments into the free markets.” Contributing to the problem, construction of city housing is not keeping pace with job growth, according to an October 2019 report from the Department of City Planning.

Mr. Deegan cautions against assuming that all people experiencing homelessness are mentally ill or struggling with substance abuse when simple affordability is a much larger contributor to the problem. He spoke of his time as the principal of St. Jude School, an elementary school in Washington Heights that was closed in 2013.

“Turning the Tide on Homelessness in New York City,” the five-year, 114-page plan released by Mayor Bill de Blasio in February 2017, states that most of more than three million housing units in the city are “unaffordable for many low- and middle-income New York families and individuals.”

Today, over two years since his proposal, Mr. de Blasio continues to face criticism for a perceived lack of results from his plan. The New York Daily News reported in September that, after the city spent $2.14 billion on homeless services in the last fiscal year, the number of “unsheltered individuals” ballooned from 3,182 to 3,588 in four years.

“I think, unfortunately, the city and state governments are not doing what they should be doing,” said Mr. Deegan. “They’re not doing enough.”

Mr. Deegan believes that informing the public is essential. He praised members of the media who have covered the issue of homelessness, specifically referencing the New York Times story on four homeless men beaten to death in Chinatown this past October. “That prompted [a] greater level of public awareness and attention to the crisis of homelessness in New York,” he said.

Homeless members of minority communities face especially tough hurdles. In May, WNYC reported that people of color account for the majority of homeless youth in the city, while around 50 percent of homeless youth belong to the L.G.B.T. community. The Ali Forney Center in New York City, which specifically administers to homeless L.G.B.T. youth, sets their figure at 40 percent.

“I would say 80 to 85 percent of the young people that we see here at Covenant House New York are either African-American or Latino. ... Up to about 30 percent of the youths here identify as L.G.B.T.,” said Sister Downing. She advocates looking at “how we’re marginalizing people both in terms of employment and education.”

“[There have] to be multiple ways of giving to help, to let folks know who are living in poverty that they are cared for, that they’re cherished, that they matter and that we know that they’re working hard.”