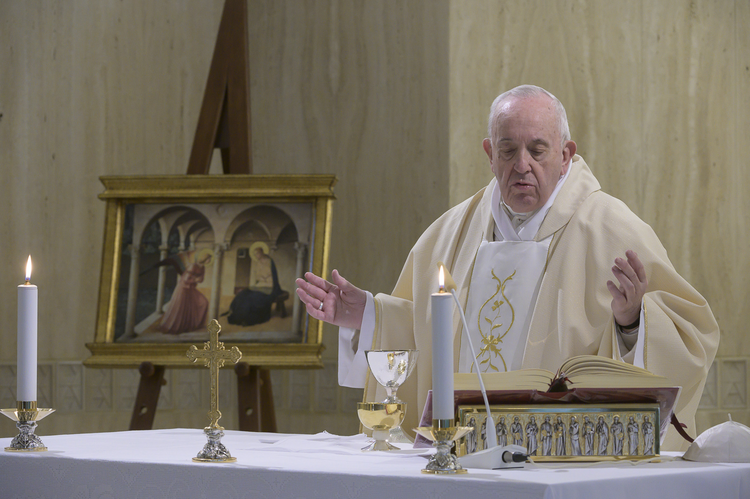 Pope Francis celebrates Mass on the feast of the Annunciation, March 25, 2020, in the chapel of the Domus Sanctae Marthae at the Vatican. (CNS photo/Vatican Media)

An Italian priest working in the Vatican and residing in the Santa Marta guesthouse where Pope Francis lives has tested positive for coronavirus and has been hospitalized, Italian media reported this evening, and America confirmed the story from Vatican sources.

The priest, identified as Msgr. Gianluca Pezzoli, 58, is head of the Italian section of the Vatican’s Secretariat of State. He is a permanent resident in Santa Marta, as are some 10 other priests working in Vatican offices. Persons who have been in close contact with Monsignor Pezzoli have now been tested for the virus, a source told America. It is presumed that they are in isolation, though the Vatican has not confirmed this. In fact, the Vatican has not issued any comment on this case so far.

The news naturally raised concerns for the pope’s health, but sources told America that Monsignor Pezzoli has not been in contact with Pope Francis. Like many other persons who reside and eat in Santa Marta, Monsignor Pezzoli does not meet the pope except for a specific reason.

The concern for the pope also arose from the fact that as a young man of 21, before joining the Jesuits, Francis underwent surgery to remove one or more cysts from the upper lobe of his right lung. But he fully recovered from that operation and has not had such problems since. It should be emphasized that he has not lost one lung as some media continue to report.

The news naturally raised concerns for the pope’s health, but sources say that Monsignor Pezzoli has not recently been in contact with Pope Francis.

A Vatican source (who wished to remain anonymous because he was not authorized to speak publicly on the matter) told America that Pope Francis has not eaten in the dining hall of Santa Marta since early March when he contracted a very bad cold on Ash Wednesday and could not participate in the retreat for the Roman Curia.

The source said that Francis, who has now fully recovered, has eaten in his room on the second floor of Santa Marta or in a separate dining room since then. But he continues to receive the heads of the Vatican congregations and offices on a regular basis, sometimes in the apostolic palace where there is more space.

But, various sources say, Vatican officials ensure that they clean their hands with sanitizers before meeting the pope, lest he shake hands with them as sometimes happens. America has learned that everyone residing or working at Santa Marta is now being tested for the virus.

On March 9 Francis met 28 French bishops. French Catholic media reported that one of them (who was a doctor before becoming a priest) later tested positive, and the bishops had to go into self-isolation.

The fourth case mentioned by Mr. Bruni was that of a priest from Bergamo who had attended a Vatican conference on March 6 and was found to be with the virus at that time when he visited the Vatican medical center. This was the first case of coronavirus reported at the Vatican.

Today’s case was not mentioned by Mr. Bruni; it seems at the time he spoke Monsignor Pezzoli had not yet tested positive.

Pope Francis, for his part, celebrated Mass this morning, March 25, then held a virtual Wednesday audience and at noon prayed the Our Father with Christians worldwide, asking God to rid the world of the pandemic. These events were transmitted by Vatican media as will Pope Francis’ evening prayer service and blessing “Urbi et Orbi” from the steps of St. Peter’s on Friday, March 27.