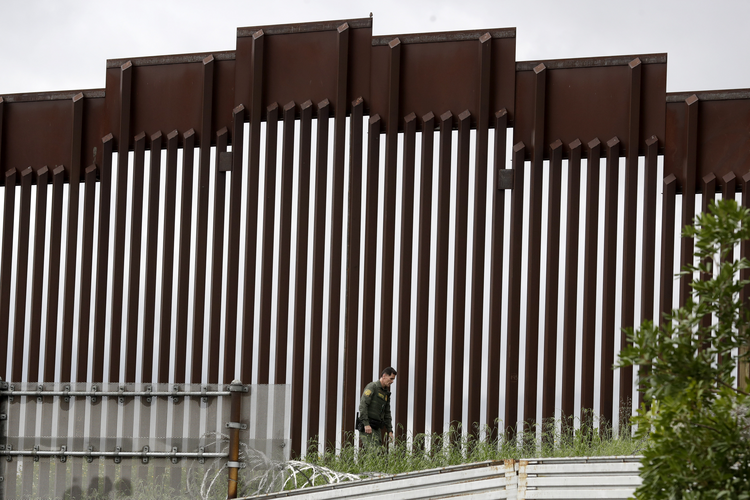 Just last month, more than 400 gathered for the blessing of the Kino Border Initiative’s new 18,000-square-foot building in Nogales, in the Mexican state of Sonara, just south of Arizona. Today, with the outbreak of Covid-19, things are much different.

The Kino Border Initiative is a binational effort to serve migrants, educate the public and advocate for justice. Since 2009, part of its daily work has included providing food and a place to eat for migrants—those heading north, those recently deported from the United States and those seeking U.S. asylum. Kino workers are still serving food at their comedor, but the coronavirus has changed how they do it.

“It really modified our services—clothing, legal counsel, meals. We’re still serving, but it’s been an adjustment for everyone.”

“What we’re trying to do is maintain a distance between migrants while they wait in line,” Sean Carroll, S.J., the director of the Kino Border Initiative, told America. Families will enter together, receive their food and then find a place to eat outside. Kino can no longer provide seating, and those involved in the food service are wearing face masks and gloves.

“It really modified our services—clothing, legal counsel, meals,” Father Carroll said. “We’re still serving, but it’s been an adjustment for everyone.”

The Kino Border Initiative has also counted on volunteers to carry out its mission, including some who come to Nogales from the United States and spend months volunteering. Father Carroll has sent those long-term volunteers home, he said.

Other volunteers, who come down for the day from southern Arizona, have been told not to come. That is for their own safety—many of the volunteers are retired—and for the safety of the migrants. As of March 19, there were 93 confirmed cases of the coronavirus in Mexico and 7,087 cases in the United States. Father Carroll said there have not yet been any confirmed cases in Nogales.

President Trump announced today that the U.S.-Mexico border will be closed to nonessential traffic to stem the spread of the coronavirus, according to Reuters.

“It’s best not to have any U.S. volunteers, the way it’s spreading in the U.S. And we have a lot of volunteers that are senior citizens,” he said. While young adults have also gotten sick, the Centers for Disease Control and Prevention has said older adults and those with underlying medical conditions are more susceptible to getting seriously ill if they contract Covid-19.

Over the past few months, the initiative has been serving more migrants who are waiting for a court hearing in Nogales due to the Trump administration’s “Remain in Mexico” policy. The center’s needs include: acetaminophen, anti-bacterial gel, anti-bacterial spray cleaner, vitamin C, caladryl, hospital masks and rubber gloves.

“We’re really trying to do all we can to mitigate the risk as much as possible,” Father Carroll said. “We count on a lot of volunteers, so we’ll have to do what we can and plan accordingly. But we’re going to continue to serve the migrants here.”

Norma Pimentel, M.J., who serves as executive director of Catholic Charities of the Rio Grande Valley in Brownsville, Tex., said humanitarian groups are “taking all the precautions possible.”

Thousands of asylum seekers have been waiting for their court date in Matamoros, Tamaulipas, just south of Brownsville, because of the Migrant Protection Protocols, more commonly known as the “Remain in Mexico” policy. This policy has empowered immigration officials to return thousands of asylum seekers to Mexico while their cases were decided by the U.S. immigration court system. Migrants began setting up camps and sleeping in tents after shelters ran out of space.

Thousands of asylum seekers have been waiting for their court date because of the “Remain in Mexico” policy.

“We have set handwashing stations throughout the camp,” Sister Pimentel said in an email to America. “We will be testing everyone that shows flu-like symptoms. We will isolate any family until we confirm it is not the virus. For now these will be the measures we take.”

Shelters in Ciudad Juarez, Chihuahua, have been meeting to coordinate a response while educating everyone about preventive measures, Marisa Limón of the Hope Border Institute said. The response could include moving to large spaces to enable social distancing.

“The pandemic is exposing gaps in what we provide to those most in need…. We want to push for a vision that is more focused on human dignity.”

“We knew these folks are immunocompromised because of malnutrition,” Ms. Limón said, adding that advocates are “gravely concerned about how these people are being transported.”

“We are concerned that the care and well-being of immigrants in detention is not being considered [by immigration officials],” she said. “The pandemic is exposing gaps in what we provide to those most in need…. We want to push for a vision that is more focused on human dignity.”

In Tijuana, Baja California, the Casa del Migrante has reduced the hours when they will welcome migrants and cut the number of migrants they are accepting to 80, half their normal capacity. They are also asking their volunteer cooks, who are senior citizens, not to come to the shelter. They have also closed their TV room, where guests would gather in the past. Migrants spread out in the patio area during meals rather than eat in the dining area, and they now use paper plates.

“We really want to keep people healthy,” according to Pat Murphy, C.S., a Scalabrini priest who runs the Casa del Migrante. “We don’t want to kick any people out, but we can’t let people in when they’re sick…. Everything we do has been amplified and made more difficult because of the virus.”

Whoever comes into the Casa is sprayed down with anti-bacterial spray after they enter, he said. They are still welcomed, but their germs are not. Father Murphy said getting guests to wash their hands so often is a “change in culture” because, as in the United States, many people have been unaccustomed to it.

A doctor has been volunteering at the Casa to help address the spread of the virus. “Money helps, but there is a shortage of things in Tijuana,” Father Murphy said, noting the scarcity of toilet paper and sanitizer. Those who want to help can coordinate directly with the Casa.

He also called on local officials to allow migrants and asylum seekers to stay in the Centro Integrador, which was built to receive those awaiting asylum hearings in the United States. While it has a capacity for 3,000, only 80 individuals are currently living there, according to Father Murphy.

In Tijuana, three cases of Covid-19 have been diagnosed. “But they’ve only tested 60 people,” Father Murphy said. “If you work that out to the population, we could have 1,000 cases…. People need to start dying in Mexico before [the government] takes it seriously.”

1
Women are rising to new heights at the Vatican. Could they change the church forever?
Colleen Dulle
2
I am a young person living with chronic pain. Please don’t tell me it’s just part of God’s plan.
Keara Hanlon
3
‘The Chair’ was uncomfortable to watch as a recent college grad. And that’s the point.
Sarah Vincent
4
Mandolinist and singer-songwriter Chris Thile writes psalms for those who struggle to believe — or belong
Elyse Durham
5
I am a Jesuit and I am an alcoholic
The Jesuit Post