Pope prays for pastors to find ways to minister amid pandemic

Pope prays for pastors to find ways to minister amid pandemic 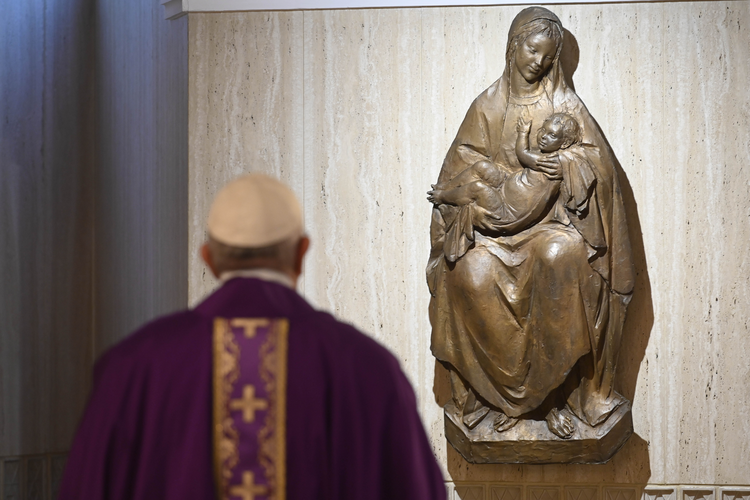 Pope Francis prays before Mary at the end of a Mass March 12, 2020, in the chapel of his Vatican residence, the Domus Sanctae Marthae. At the beginning of the liturgy, the pope encouraged people to pray for their government leaders, who must make difficult decisions to contain the coronavirus pandemic. (CNS photo/Vatican Media)

VATICAN CITY (CNS) -- Pope Francis urged people to pray for parish priests so that they may find ways to accompany their people while the coronavirus pandemic continues to restrict movement around the country and the world.

The pope offered his intention at the beginning of his livestreamed morning Mass March 13, the seventh anniversary of his election to the papacy.

A day earlier, Cardinal Angelo De Donatis, papal vicar for the Diocese of Rome, announced that all churches, which had remained open for private prayer, would be closed to prevent the spread of the virus. He modified the order the next day, allowing pastors to make the choice to open, but only if people maintain a safe distance from one another.

The pope discouraged priests from taking "drastic measures" to be near their faithful and prayed that the Holy Spirit would help their pastoral discernment in finding ways to not leave "the holy, faithful people of God alone."

In his homily, the pope reflected on the day's Gospel reading from St. Matthew, in which Jesus tells the parable of a wealthy landowner who leased his vineyard to tenants.

The landowner's servants and son attempted to collect the fruits of the vineyard. However, the tenants beat and murdered them to acquire the son's inheritance.

The pope explained that the tenants represented members of the people God chose to receive the covenant so that they "may look forward with hope." However, when the time came to gather the fruits, "these people forgot that they weren't the masters."

Through his parable, the pope continued, Jesus wanted to show that in this way, God's promise "lost its nature as a gift" and ended up becoming a moralistic ideology that "was closed and caged in a doctrine of laws."

"This is the great sin," he said. "It is the sin of forgetting that God has made himself a gift for us, that God has given us this gift and in forgetting this, we become masters. Thus, the promise is no longer a promise, the election no longer an election. 'The covenant is interpreted according to my ideologized opinion.'"

Pope Francis said that in the Gospel, Jesus confronted "the beginning of clericalism, which is a perversion that always renounces the free election of God, the free covenant of God, the free gift of God."