When was your last religious conversation?

When was your last religious conversation? 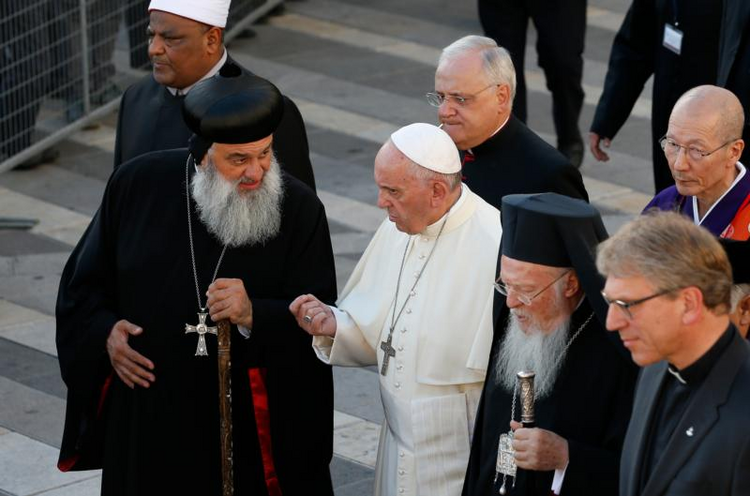 Pope Francis talks with Patriarch Efrem II of the Syriac-Orthodox Church as religious leaders arrive for an interfaith peace gathering outside the Basilica of St. Francis in Assisi, Italy, Sept. 20, 2016. The pope and other religious leaders participated in the event that marked the 30th anniversary of St. John Paul II's Assisi interfaith peace gathering. (CNS photo/Paul Haring)

A 2019 Gallup survey showed that as few as 4 percent of Americans had a conversation about religion with their family and friends in the prior week. America wanted to hear stories about the last time our readers had a religious conversation. We asked: “Who was it with? When was it? As much as you can share, what was it about?”

My last conversation about religion was two days ago, with an evangelical friend over beers at Wooden Cask Brewery in Newport, Ky. Ostensibly, the impetus for our discussion was the pastor and author Rob Bell and the notion of universal salvation.

As we drained our brews, however, the dialogue evolved to encompass our comparative thoughts as Catholic and Protestant on orthodoxy, reconciling spiritual with practical life and God’s holiness as a defining feature of his relationship to humanity.

In the past two weeks I’ve answered questions about death from my mom, who has Alzheimer’s. While I am Catholic, my mom does not associate herself with any religion, although she was the one who helped me study catechism while enrolled at a local Catholic elementary school. She (more than my dad, who was Catholic) attended all the pertinent and important sacrificial rites of childhood.

Mom is now faced with her mortality and had asked me questions about what will happen to her when she dies. I desperately want my mom to be at peace because she has not had a very peaceful life. So I told her she had nothing to fear, that I know she will go straight to heaven and be greeted by her loved ones and friends that have passed before her. She cried and wanted to know how I was so sure.

I told her because she’s a good person who has lived a good life and has been generous. She cried throughout, asking questions and listening to me. I hope that she absorbed some of the serenity and peacefulness that I’ve prayed for her to have in these last weeks and months.

A week or so ago, I discussed with my brother about the continuing revelations of the scandals involving predatory priests. We both had the same concern. When will this end? The foundation of our church is gravely damaged.

This past weekend we described to our children and grandchildren that we stayed in a Muslim neighborhood during our recent visit to Jerusalem and the Holy Land. The call to prayer several times a day was strikingly loud. Yet we were heartened by watching people pray, and it reminded us to pray too. We were treated with kindness by people of all faiths.

We were fed delicious food and even invited by [a man named] Moses to his home for dinner. I was cursed by one beggar and blessed and kissed on both cheeks by another. I wasn’t sure what my kids and grandkids would think, but they were fascinated that our Jewish tour guides carried Hebrew New Testaments and had us read the Gospel readings associated with the places we were visiting.

I think my kids were curious that we were respectful of the religious practices of other faiths.

Is ‘dialogue’ just an empty buzzword for Christians?
Gregory Hillis

I asked two coworkers to go to their corners during a conversation that was within earshot of customers. One is agnostic, the other evangelical. A third coworker had brought up the difference between deist and theist, which ignited their debate.

[My most recent religious conversation was with] my son-in-law and daughter. We compared the Muslim faith to my Catholic faith and discussed fasting. My 6-year-old granddaughter tells me about Allah.

My last conversation about religion was with a colleague at work. It was about God’s presence and action in our lives and how to discern who God is calling us to be and what God is asking us to do.

This article also appeared in print, under the headline “When was your last religious conversation?,” in the March 16, 2020, issue.