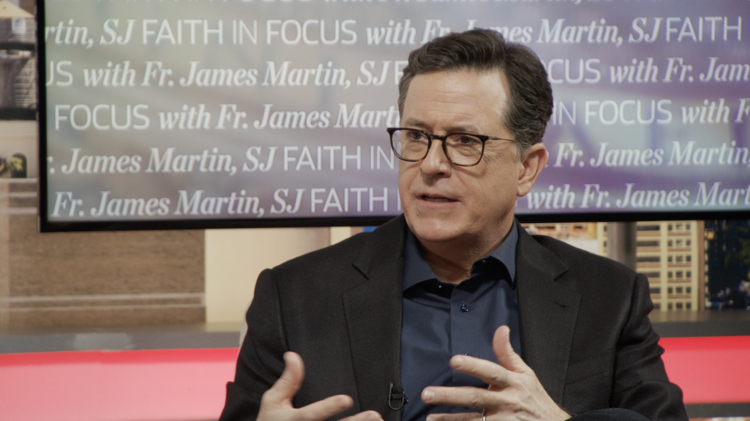 It is hard to talk about God these days.

It is hard for me, even though I write for America, host a podcast about Vatican news and produce “Faith in Focus With Fr. James Martin SJ,” a talk show centered around spiritual conversations. I just do not have those conversations often myself.

And I am not the only one. A 2017 Barna poll commissioned by Jonathan Merritt, the author of Learning to Speak God From Scratch, found that less than a quarter of all Americans talk about God or religious topics regularly. More than half of those who rarely have religious conversations said they actively avoid the topic for a variety of reasons, including the fear of starting an argument or sounding “weird” or simply being put off by how often religion is politicized.

Less than a quarter of all Americans talk about God or religious topics regularly.

It is true that politicians are some of the last people talking about God publicly—often selectively quoting Scripture passages to support their own agendas. And when politicians or ideologues seem to be the only ones talking about God, it is difficult to want to join that conversation.

In 2018, America’s video team started working on a new show that we hoped might provide an antidote to this problem. It would be called “Faith in Focus,” like the section of the print magazine that features personal spiritual reflections, and would be hosted by James Martin, S.J., himself a prolific spiritual writer. Father Martin would interview both well-known and not-so-well-known guests about their prayer, how they relate to God and how they bring their faith into their work and family lives.

We thought people might be interested in seeing some of their favorite celebrities talk about their faith or that they would be excited to have the chance to appear on the show themselves. What we did not anticipate was that people who came across “Faith in Focus” would be excited about how normal, casual and nonjudgmental these spiritual conversations seemed.

We did not anticipate was that people would be excited about how normal, casual and nonjudgmental these spiritual conversations seemed.

After the release of Episode 2, which featured an interview with Stephen Colbert, we heard from a number of people with a variety of political and religious views—from atheists to a “Jewish agnostic looking for faith” to Catholics looking for a sign of hope—about how they appreciated Father Martin’s conversation with Mr. Colbert. Both Fox News and The Washington Post wrote sympathetically about that episode, with the latter saying “Faith in Focus” “shows a new boldness on the left to not only dabble in faith but to challenge the culture’s awkwardness about the G-word.”

America does not consider the show to be “on the left” or “on the right,” but Michelle Boorstein of The Washington Post raises a good point: Those who are politically liberal tend to shy away from spiritual conversations more than conservatives do. As the producer, it is my hope that “Faith in Focus” will be a forum for thoughtful people of varying political persuasions to speak honestly about their faith. Moreover, I hope that it continues to inspire viewers of all walks of life to reflect on spiritual questions and maybe even to bring those honest, vulnerable conversations into their own lives.

As for me, the process of becoming more comfortable with having spiritual conversations is still slow going, but producing “Faith in Focus” is pushing me to be more and more open about my own faith. For the segment of the show called “People of God,” in which Father Martin video-chats with a Catholic from anywhere in the world about an experience of God that changed his or her life, I get to call each guest before the recording to listen to their stories and get them ready for the show. I find these pre-interviews to be very intimate: There are no cameras or fancy studio equipment; it is just me and the guest, whom in many cases I have never met, sharing stories about prayer and God.

Sometimes, during the best of these calls, I am able to put my concerns about the length of the story or the guest’s internet connection or Father Martin’s possible follow-up questions aside and simply listen to the guests, encourage them and let them know they are being heard. These people of faith astound me with how vulnerable they are willing to be with me, a complete stranger, and they inspire me to have that same openness to sharing my own experiences with others.

I have been trying to do that in other areas of my life. I have talked to friends who I think will be sympathetic about my consolations and struggles in prayer. On America’s news podcast “Inside the Vatican,” I have tried to describe how scandal and missteps in the church can hurt the faith of regular Catholics, myself included.

It is still difficult for me and for many Americans to talk about God. But it is my hope that “Faith in Focus” will help us to start a new conversation.

Colleen Dulle is an assistant producer of audio and video at America Media.

Conversations about God will occur if we attune ourselves to other's conversation with God. My dad told me that he finds himself praying for people whom he notices praying in Church. A priest told me how moved he was when he saw people coming in off the street to pray in St. Patrick's Cathedral.
Yet "God" conversations frequently are awkward. This is to be expected. One's relationship with God is the deepest personal relationship possible. It is similar to the realm of sexual intimacy. One is not ashamed of marital sexual intimacy but one spontaneously recognizes that speaking to others about it can be done only if the emotional and social environment is protective and nurturing. Fr. Martin does create such an atmosphere for "God talk". A charism, no doubt, but one perhaps more given than recognized. Hopefully this article will help those with the charism "to stir up the grace that is within you." 2 Tim. 1:6

Thanks for sharing! I used this episode in my theology classroom to get my students to not only get comfortable talking about God and faith but to listen without judgment. They loved the episode and it opened them up to start thinking about their own images of God, faith journey and the struggle with doubt. Thanks for being a part of our classroom conversation!

Thanks for sharing! I used this episode in my theology classroom to get my students to not only get comfortable talking about God and faith but to listen without judgment. They loved the episode and it opened them up to start thinking about their own images of God, faith journey and the struggle with doubt. Thanks for being a part of our classroom conversation!

I'd pay ya to have Fr. Martin interview Glenn Beck, whose pH is substantially more toward zero than Colbert. I think Beck may have expatriated more Christians out of Syria than Colbert, but I could be wrong.

Try a necessary contemporary God conversation with "The name of God is not Allah and Allah is not God" and see how comfortable and cool that is.

Or how about, "All religions are basically the same and preach love and understanding and peace"?

I am a Catholic and a liberal. I frequently read political conservatives online who refer to liberals as “godless,” or “atheists,” or “wanting to stomp God out of America.” I know many liberals who are very involved with their religions and have developed many of their liberal political views from their religious beliefs.

I find it easy to discuss God with liberal Christians and Jews. It is more difficult with right-wing Christians because I find them judgmental, aggressive, and absolutely certain in their righteousness thereby making discussions somewhat boring. Many of them live in opposition of Abraham Lincoln’s famous statement, “My concern is not whether God is on our side; my greatest concern is to be on God’s side.”

I agree with you Judith. I think the reason most people want nothing to do with religion is because of what fundamentalist Christians (both Protestant and Catholic) have done with it.

Theee comments in a row about the intolerance of those with whom they disagree.

Also not discussed why one should be religious or be a Catholic. Challenge to Fr. Martin, why should one be a Catholic? Easily explained in traditional Catholic teaching but somehow not here.